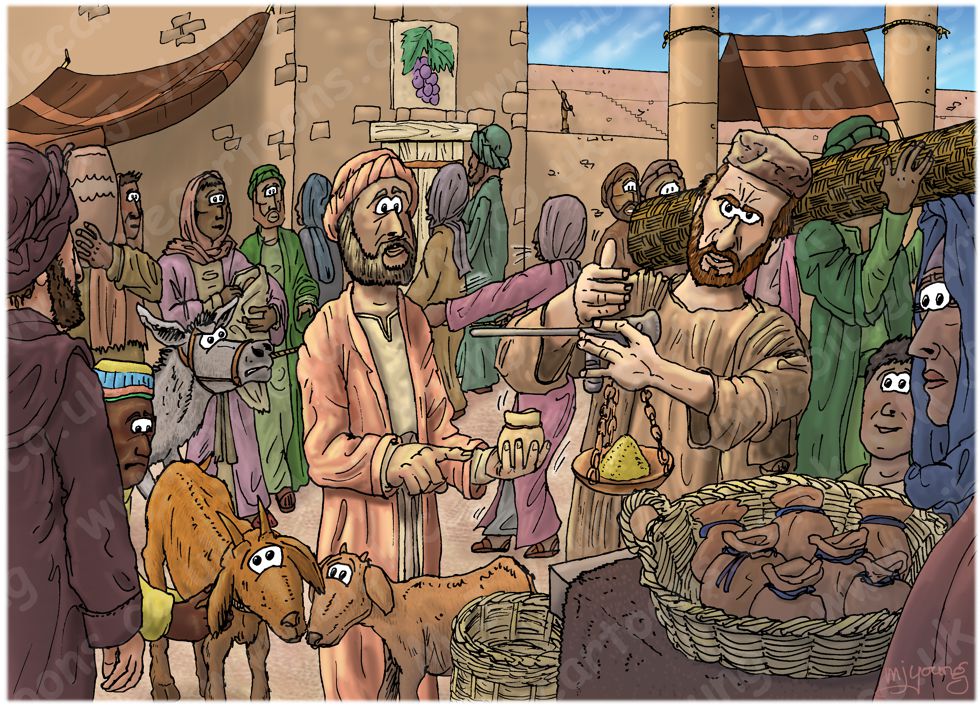 LIGHTING NOTES:
Sunlight (high above) illuminates this scene, casting shadows below figures & objects.
In order to focus the viewer’s attention on the two central figures, I have darkened the colours of the surrounding people, and applied full, bright sunlight on the two men, which also creates darker shadows on them too.

CHARACTERS PRESENT:
In the centre of the scene is the servant who received 5 bags of gold (he has one of the bags in his left hand). To the right is a merchant using hand scales to weigh a pile of something.
Surrounding these two central figures are various Hebrew traders, merchants, customers, etc.

RESEARCH/ADDITIONAL NOTES:
This scene is set in an un-named town or city. The servant who has received 5 bags of gold (see previous scene) is negotiating with a merchant. This represents Jesus phrase “The servant who received the five bags of gold began immediately to invest the money and soon doubled it.” (verse 16). Although I haven’t shown the 2nd servant (who received 2 bags of gold from his master), this scene implies that he also invested his money, and doubled his gold. Both men later being commended by their master for being good servants, buy investing their master’s money & getting a good return on that investment for him.

Notice the woman in the right foreground, who is selling something in leather pouches. There is a boy walking past her stall. On the left, there is a man in a brightly coloured cloth hat, who is trying to gather up two escaped goats. Behind the two central figures there is a woman trying to pull a grey donkey along with a rope. There is a man in green garments carrying a rolled up mat or carpet on his shoulder on the right.

Behind all this activity there is a bustling crowd of people. behind that there is a stone building with a carved stone picture of a bunch of grapes – perhaps a public (drinking) house? There is a heavy cloth awning attached to this building, which would provide much needed shade when the scorching sun is beating down on the market place. There is a similar awning strung up between two stone pillars in the background, on the right.

In the far background we can see the town/city walls, with a guard holding a spear, patrolling the wall.