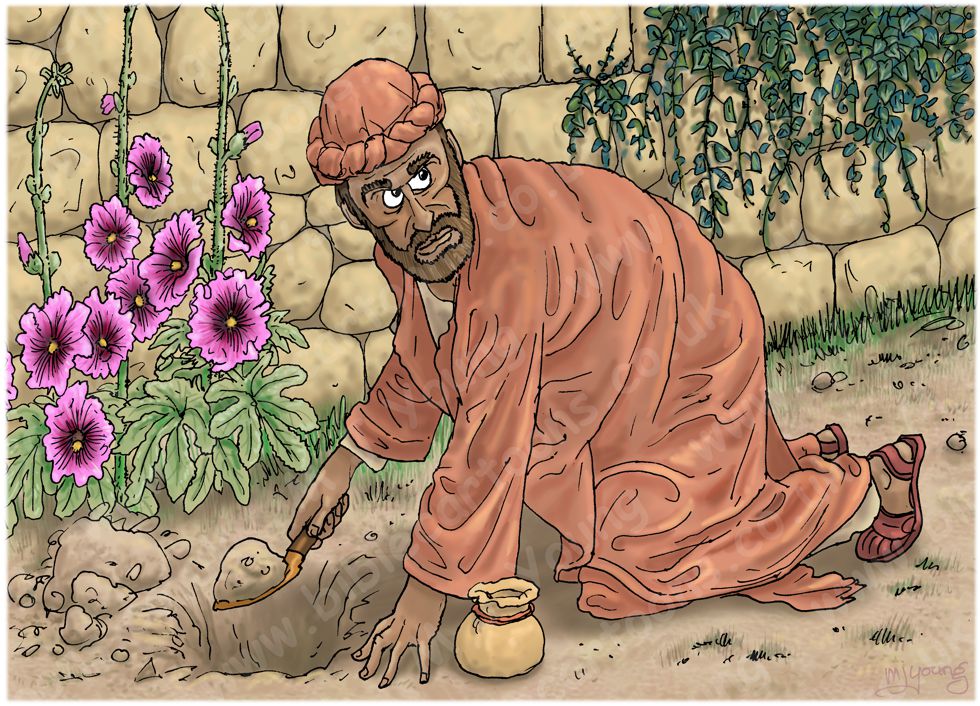 Matthew 25:18 (NLT)
But the servant who received the one bag of gold dug a hole in the ground and hid the master’s money for safekeeping.

CHARACTERS PRESENT:
The servant who received 1 bag of gold.

RESEARCH/ADDITIONAL NOTES:
In this scene the servant is using a trowel to dig a hole, in which he will bury the gold. In verses 26-30 we read the master’s assessment of this servant: that he is wicked and lazy. This seemingly harsh criticism is based on what the master’s servants did with the talents given to them. The servants who used their talents to gain more where judged as being faithful, wise & resourceful. But the one who did not use this talent for anything (burying it instead) was judged as being unfaithful & lazy.

Against the wall some Alcea setosa (Alcea setosa (Boiss.) Alef.) (aka Bristly hollyhock) is growing, and in full bloom. This plant is a Hemicryptophyte, that is a perennial plant that bears its overwintering buds at soil level, where they are often partly covered by surface debris. Alcea setosa is widespread in the Mediterranean mountainous open areas. Rare in Judea and Samaria, found quite frequently in the Carmel and Lower-Galilee. Althaea is a perennial plant growing to 4.9-6.5 feet (150-200cm) tall, with broad, rounded, palmate lobed leaves with 3-7 lobes and numerous pink flowers, on the erect central stem. The corolla (the petals of a flower, typically forming a whorl within the sepals and enclosing the reproductive organs) is 6-7.8 inches (15 to 20 cm) in diameter. The flowers bloom in April to the beginning of June. This plant is a native of the Levant [1], ranging from Crete and Turkey to Israel & Jordan.

The other plant growing on the rock wall is Hedera helix (aka Common Ivy) which is found in the Mediterranean Woodlands and Shrublands climatic zone of Israel. The climber flowers in Oct- Dec, Jan – Feb, and typically grows in Mediterranean maquis and forest, & on hard rock outcrops.

[1]
Levant, (from the French lever, “to rise,” as in sunrise, meaning the east), historically, the region along the eastern Mediterranean shores, roughly corresponding to modern-day Israel, Jordan, Lebanon, Syria, and certain adjacent areas. Common use of the term is associated with Venetian and other trading ventures and the establishment of commerce with cities such as Tyre and Sidon as a result of the Crusades. It was applied to the coastlands of Asia Minor and Syria, sometimes extending from Greece to Egypt. It was also used for Anatolia and as a synonym for the Middle East or Near East. In the 16th and 17th centuries the term High Levant referred to the Far East. The name Levant States was given to the French mandate of Syria and Lebanon after World War I, and the term is sometimes still used for those two countries, which became independent in 1946. A similar term, Al-Mashriq (“Where the Sun Rises”), exists in Arabic, although this term refers to a broader geographic region.
[Source: Encyclopaedia Britannica]