All of these cartoons relate to running, athletics, competition, archery, swimming, winning, races & the events of the Olympic Games. 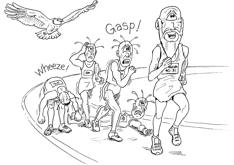 Isaiah 40:31 ‘but those who hope in the Lord will renew their strength. They will soar on wings like eagles; they will run and not grow weary, they will walk and not be faint.’ This cartoon shows an old man out-distancing younger ones on an Olympic sports track. With an eagle flying over for good measure! 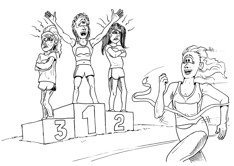 1 Corinthians 9:24 ‘Do you not know that in a race all the runners run, but only one gets the prize? Run in such a way as to get the prize. ’ The apostle Paul refers to races, running & reaching for the prize, which is at the heart of the Olympic competition 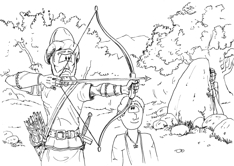 01 Samuel 20:35-36 ‘In the morning Jonathan went out to the field for his meeting with David. He had a small boy with him, and he said to the boy, "Run and find the arrows I shoot." As the boy ran, he shot an arrow beyond him.’ Archery is an Olympic sport, & the Bible certain refers to shooting arrows, hence this cartoon! Follow this link to see the coloured version of this cartoon: 1 Samuel 20 - Jonathan helps David - Scene 06 - Archery signal 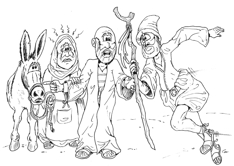 02 Kings 4:29-30 ‘Elisha said to Gehazi, "Tuck your cloak into your belt, take my staff in your hand and run...’ The scripture’s reference to running made me think this might make a good Olympic Games cartoon. Follow this link to see the coloured version of this cartoon: 2 Kings 04 - Shunammite’s son resurrected - Scene 11 - Gehazi runs 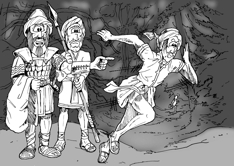 02 Samuel 18:23 ‘Ahimaaz son of Zadok said, "Come what may, I want to run." So Joab said, "Run!" Then Ahimaaz ran by way of the plain and outran the Cushite [who was running to King David to tell him of the death of his rebellious son Absalom.]’ This cartoon is set in a dark forest. Ahimaaz was a fast runner who took messages to the king. You can see the Cushite running off in the distance! I was inspired by the reference to running & thought it would make a good cartoon to celebrate the Olympic Games. Follow this link to see the coloured version of this cartoon: 2 Samuel 18 - David Mourns - Scene 01 - Ahimaaz runs 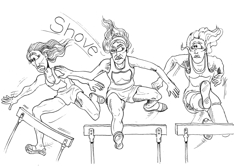 Galatians 5:7 [The apostle Paul wrote to the church in Galatia] 'You were running a good race. Who cut in on you and kept you from obeying the truth?' A literal picture of a spiritual observation - that someone can upset our walk (or run!) of faith. Here we see the central woman hurdler pushing another woman over in this Olympic athletics race. 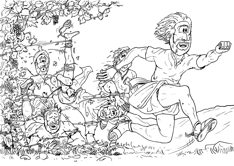 Hebrews 12:1 (ANIV) - Therefore, since we are surrounded by such a great cloud of witnesses, let us throw off everything that hinders and the sin that so easily entangles, and let us run with perseverance the race marked out for us. This is a famous Bible quotation which seems to fit the theme of running in the Olympic Games very nicely. Follow this link to see the coloured version of this cartoon: Hebrews 12 - Throw off sin entanglements in the race 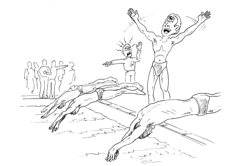 Isaiah 25:11 'They will spread out their hands in it, as a swimmer spreads out his hands to swim. God will bring down their pride despite the cleverness of their hands.' Isaiah was talking about the pride of the ancient people of Moab in this Bible verse. To illustrate the idea in Olympic terms, I have shown a swimmer missing the start of a swimming race because he is pridefully taking audience applause, rather than getting on with the event! 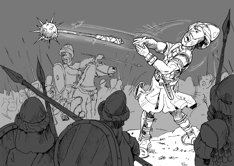 Ecclesiastes 3:1 & 6 'There is a time for everything, and a season for every activity under heaven ... a time to keep and a time to throw away... ' This is a famous quote about everything having its time. When I read “a time to throw away” I immediately thought of Olympic hammer throwing, although I have a war hammer being throw on a battlefield. Maybe that’s how the sport of hammer throwing started?! Follow this link to see the coloured version of this cartoon: Ecclesiastes 03 - Hammer throwing 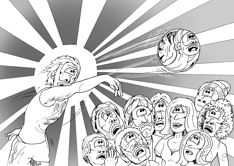 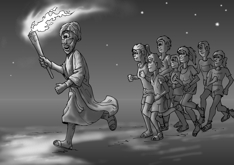 Psalms 119:105 'Your word is a lamp to my feet and a light for my path.' This cartoon shows an Olympic torch bearer (followed by children) running at night, with the torch lighting his way. The Bible says that God’s Word (the Bible) is the lamp that lights our way. Follow this link to see the coloured version of this cartoon: Psalm 119 - Torch Bearer