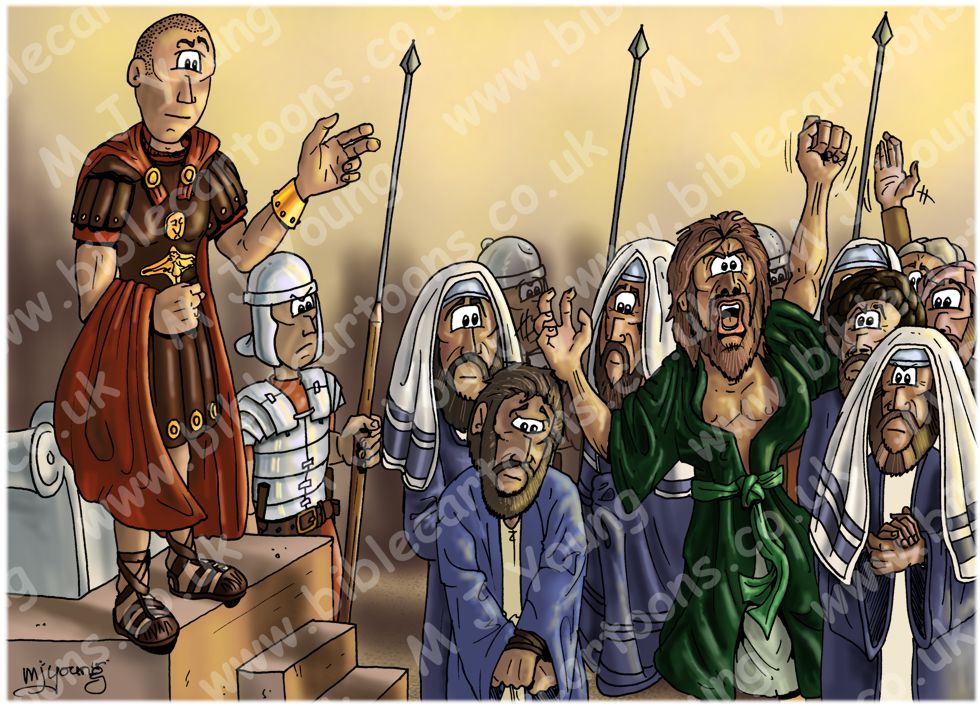 Mark 15:6-15a (NLT)
6 Now it was the governor’s custom to release one prisoner each year at Passover time—anyone the people requested. 7 One of the prisoners at that time was Barabbas, convicted along with others for murder during an insurrection. 8 The mob began to crowd in toward Pilate, asking him to release a prisoner as usual. 9 “Should I give you the King of the Jews?” Pilate asked. 10 (For he realized by now that the leading priests had arrested Jesus out of envy.) 11 But at this point the leading priests stirred up the mob to demand the release of Barabbas instead of Jesus. 12 “But if I release Barabbas,” Pilate asked them, “what should I do with this man you call the King of the Jews?”
13 They shouted back, “Crucify him!”
14 “Why?” Pilate demanded. “What crime has he committed?”
But the crowd only roared the louder, “Crucify him!”
15 So Pilate, anxious to please the crowd, released Barabbas to them. [He ordered Jesus flogged with a lead-tipped whip, then turned him over to the Roman soldiers to crucify him.]

TIME OF DAY:
The scripture tells us that this scene is set, “Very early in the morning.”

LIGHTING NOTES:
The main source of light is from the rising sun, from the right of the cartoon, which adds a yellow hue to the scene, particularly on the wall behind the figures.

CHARACTERS PRESENT:
Pontius Pilate (standing on the wooden dais) with three Roman guards or soldiers in metal & leather armour, carrying spears.
The crowd of Hebrews: the leading priests, other leaders & teachers of religious law—the entire high council (or Sanhedrin) with Jesus bound before them, in the foreground.
Barrabas, wearing a green outer robe.

Only a few moments have passed since the previous scene: enough time to release Barabbas to the crowd. We see him (Barabbas) defiantly shouting & punching the air, as he is released.

Notice Jesus expression: downcast, resigned, pained, as he awaits the cross which he knows is before him.