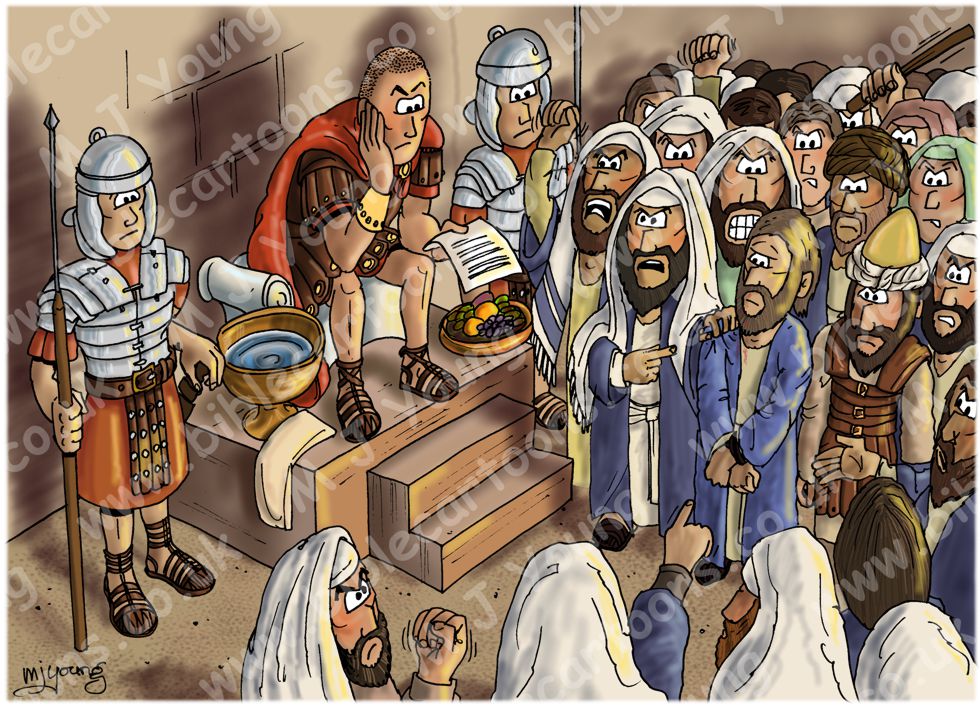 Mark 15:1-5 (NLT)
1 Very early in the morning the leading priests, other leaders, and teachers of religious law—the entire high council [1] —met to discuss their next step. They bound Jesus and took him to Pilate, the Roman governor.
2 Pilate asked Jesus, “Are you the King of the Jews?”
Jesus replied, “Yes, it is as you say.”
3 Then the leading priests accused him of many crimes, 4 and Pilate asked him, “Aren’t you going to say something? What about all these charges against you?” 5 But Jesus said nothing, much to Pilate’s surprise.

TIME OF DAY:
The scripture tells us that this scene is set, “Very early in the morning.”

LIGHTING NOTES:
The main source of light is from the rising sun, from the right of the cartoon.

CHARACTERS PRESENT:
Pontius Pilate (sitting on the wooden dais) flanked by 2 Roman guards in metal & leather armour.
The crowd of Hebrews: the leading priests, other leaders & teachers of religious law—the entire high council (or Sanhedrin) with Jesus bound before them. A Hebrew temple guard stands beside Jesus, in brown leather armour & conical helmet.

The night trial of Jesus at the chief priest’s home was illegal under Jewish law. In order to have Jesus crucified, the Sanhedrin had to take Jesus to Pontius Pilate, the Roman governor.

These Jewish leaders got together at first light (about 4:30 a.m.) or at dawn (about 5:30 a.m.) to quickly make their trail’s conclusion official. Roman officials like Pilate would meet with clients and members of the public from dawn till about noon, so the Jewish leaders needed to get Jesus ready for Pilate very early in the day. Pilate stayed in Herod the Great’s old palace in Jerusalem during the Passover.

The Jewish leaders knew that Jesus’ claim to be the Jewish king, the Messiah, would lead to a charge of sedition and treason against the emperor, since such a claim was tantamount to treason against Caesar, a crime punishable by death. Pilate was initially surprised by Jesus silence: Roman law did not interpret silence as an admission of guilt.

In this scene, we can see Pontius Pilate sitting on a marble seat, mounted on a wooden dais. He looks thoughtful (and slightly annoyed?!) as he considers the angry group of Jewish leaders & Jesus’ silence we know from the text surprised him. He is reading a “charge sheet” which is just my way of pointing out that someone must have scribed a record of the trial.