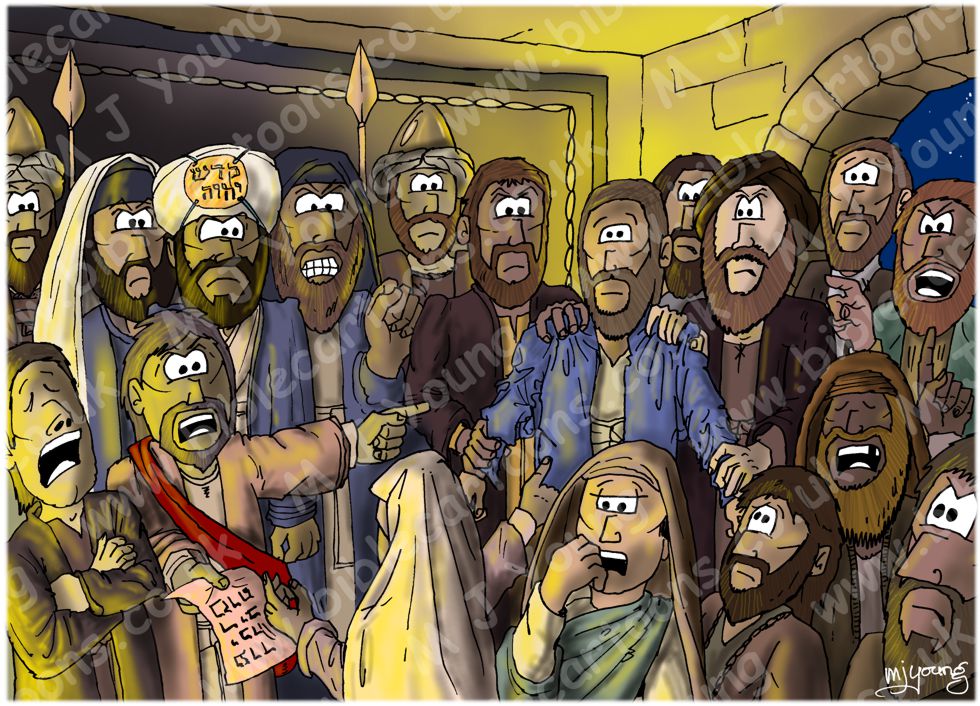 Mark 14:55-59 (NLT)
55 Inside, the leading priests and the entire high council [1] were trying to find witnesses who would testify against Jesus, so they could put him to death. But their efforts were in vain. 56 Many false witnesses spoke against him, but they contradicted each other. 57 Finally, some men stood up to testify against him with this lie: 58 “We heard him say, `I will destroy this Temple made with human hands, and in three days I will build another, made without human hands.’ “ 59 But even then they didn’t get their stories straight!

LIGHTING NOTES:
There are 2 sources of light in this scene: 1 is a lamp or torch off to the left, the other is a lamp or torch, on an unseen table, behind the figures. The warm yellow glow of which can easily be seen.

CHARACTERS PRESENT:
The scripture points out that the leading priests & the entire high council (called the Sanhedrin, which consisted of 71 men) were present, although I couldn’t fit that many people into the cartoon! I have also put a scholar, or scribe in the foreground, holding a piece of parchment with four Hebrew words on it. This is a sort of ancient “charge sheet” against Jesus Christ! Jesus himself is held between the same two men who held him in the garden of Gethsemane. There are various people falsely accusing him in the picture. There are two temple guards, holding spears, in the background.

This scene follows the previous one Mark 14 – Jesus arrested – Scene 04 – In the high priest’s courtyard. It shows the scene of Jesus, securely held 7 facing various unreliable witnesses, all arguing with each other.

The high priest can be seen with a large white turban on his head. Although he has some fine clothes, I have not shown him fully garbed with all the specially designed garments which are meticulously described in scripture. He simply has the turban on his head which is part of his priestly attire, & which sets him apart from the other people present. Notice the tsiyts, or medallion/plate of pure gold, with the Hebrew words qodesh Yehovah, which means “Holiness to the Lord”, or “set apart as holy to the Lord” on his head. The description of the high priests garments can be read in Exodus 28:4-39, which also includes the description of the medallion or tsiyts mentioned above.

The scribe in the foreground has four words, written in Hebrew, on a piece of parchment. Note: they are upside down from our point of view! They read, from bottom to top (as we are viewing them)…

I do not know enough about Hebrew to know if these words might appear together, but my intention is to show that the scribe has a list of witnesses, with the intention of conducting a case (against Jesus Christ) leading to his execution.