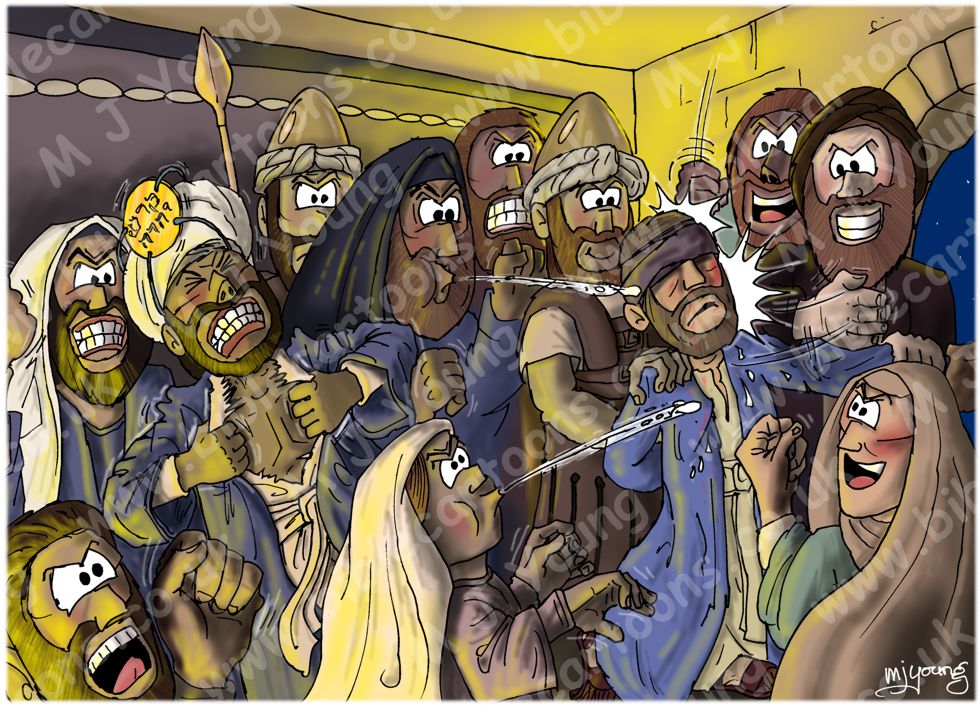 Mark 14:60-65 (NLT)
60 Then the high priest stood up before the others and asked Jesus, “Well, aren’t you going to answer these charges? What do you have to say for yourself?” 61 Jesus made no reply. Then the high priest asked him, “Are you the Messiah, the Son of the blessed God?”
62 Jesus said, “I am, and you will see me, the Son of Man, sitting at God’s right hand in the place of power and coming back on the clouds of heaven.” [1]
63 Then the high priest tore his clothing to show his horror and said, “Why do we need other witnesses? 64 You have all heard his blasphemy. What is your verdict?” And they all condemned him to death.
65 Then some of them began to spit at him, and they blindfolded him and hit his face with their fists. “Who hit you that time, you prophet?” they jeered. And even the guards were hitting him as they led him away.

LIGHTING NOTES:
As with the previous scene (Mark 14 – Jesus arrested – Scene 05 – False witnesses) this scene has 2 sources of light: 1 is a lamp or torch off to the left, the other is a lamp or torch, on an unseen table, behind the figures, both casting a warm yellow glow into the scene.

CHARACTERS PRESENT:
Set in the house of the high priest, the scripture points out that the leading priests & the entire high council (called the Sanhedrin, which consisted of 71 men) were present, only a few of which are seen here. The high priest can be seen tearing his clothes in horror at Jesus claim to be the Messiah, or Son of God. The 2 members of the Sanhedrin next to the high priest are shaking their fists, & one of them is spitting at Jesus. Jesus himself is being man-handled by a temple guard, whilst various other crowd members jeering, hitting &/or spitting at him.

This scene is set a few moments after the previous one, where Jesus makes his declaration of divinity…
The high priest asks him directly, “Are you the Messiah, the Son of the blessed God?”
Jesus said, “I am, and you will see me, the Son of Man, sitting at God’s right hand in the place of power and coming back on the clouds of heaven.” Such a declaration seals his fate.

I found this scene rather disturbing to draw & colour. The way the people have grown into grotesque, enraged, violent creatures is quite shocking & desperately sad. I’ve surprised myself with this rendering. In one sense I am pleased with the finished picture, in that it successfully depicts the scene, but on the other hand it shows the awful, violent nature of crowds & mobs. Each member of the crowd has taken on an ugly glint in their eye, or else is physically abusing Jesus, & apparently enjoying it. Truly this scene depicts people at their worst.

As in the previous illustration I have shown two women getting involved: one is spitting on Jesus, the other can’t wait to get close enough to punch him. It is quite shocking what people will do, as a crowd or mob, which they wouldn’t dream of doing in saner moments. These two women are like harpies! This illustration makes me very sad, as it shows the worst side of human nature, & we know from the scriptures that it actually happened to Jesus.