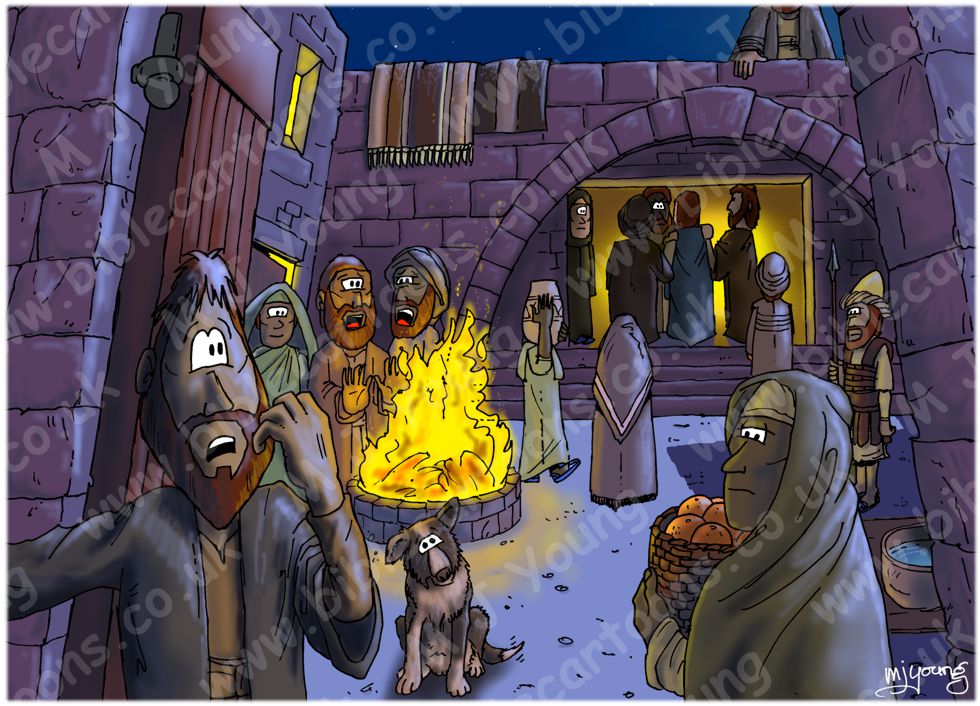 Mark 14:53-54 (NLT)
53 Jesus was led to the high priest’s home where the leading priests, other leaders, and teachers of religious law had gathered. 54 Meanwhile, Peter followed far behind and then slipped inside the gates of the high priest’s courtyard. For a while he sat with the guards, warming himself by the fire.

LIGHTING NOTES:
The 2 main light sources for this scene are the warm glow from the fire in the courtyard, on the left & the unseen moon (casting a pale blue glow) which is high in the night sky, on the right.

CHARACTERS PRESENT:
Simon / Peter can be seen sneaking into the gates of the courtyard on the left. Various people are milling about in the courtyard: 2 men are talking whilst warming themselves by the fire, a maid servant is looking behind them, another carries a water jar across the courtyard, a temple guard stands to attention behind the maid servant who is at the main gate, looking at Simon / Peter & carrying oranges in a basket. We can also see Jesus being taken into the home of the high priest, in the background.

There is very little information about Hebrew architecture on the internet. Consequently I have it difficult to discover what houses & other buildings might have looked like, in first century Israel. I have managed to piece together a few photographs & have made my own drawings, based on descriptions.

This scene shows Simon / Peter creeping into the courtyard of the high priest. Apparently the courtyard was an important part of a dwelling, as this extract from the Bible Architecture website shows:

‘Stairs or a wooden ladder led up onto the roof, which was used as an outdoor room that was partly shaded by matting or a tent-like superstructure.
The inside rooms tended to be small and dark, so the courtyard and the roof were important parts of the house, used for tasks that needed good light – such as spinning and weaving, and food preparation. The flat roof area might also be used for sleeping, or for drying food or textiles (see the story of Rahab the prostitute in Joshua 2:6).’

We know from the scripture that this scene was at night, & I have supposed that various people would have been moving about in the courtyard area.

I have included a Border Collie dog – looking quizzical at Simon / Peter – in the scene, as I’m sure there were dogs in ancient Biblical times!

Notice there is a basin of water on the right of the picture: used for foot-washing by guests.

Who is the man on the roof, in the upper right of the picture? Could it be the high priest, or is it someone else? I’ll let you decide!