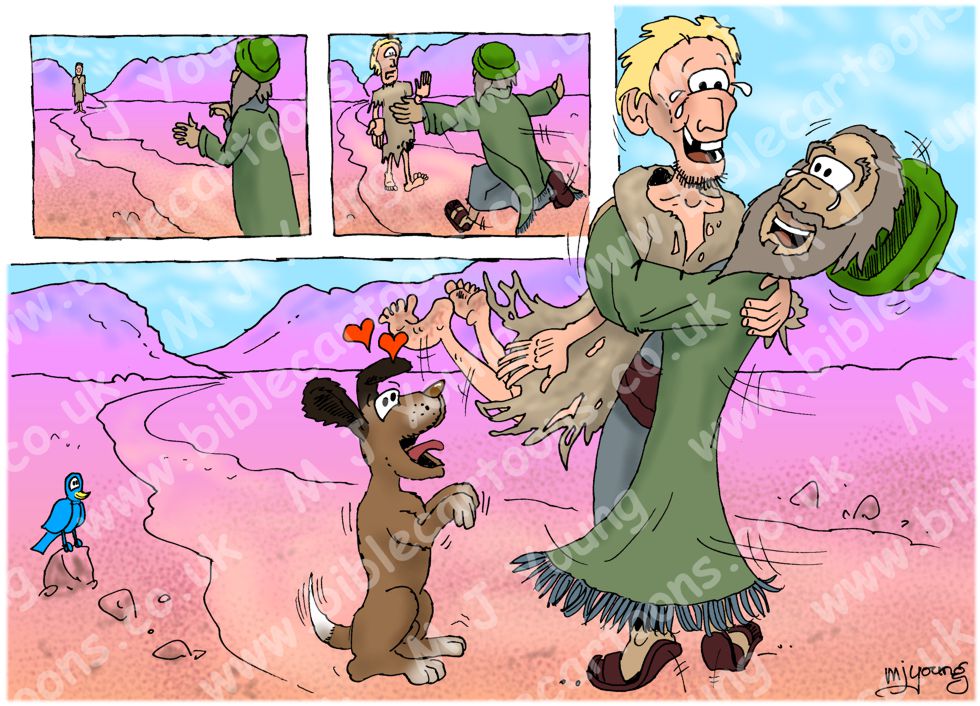 Luke 15:20-24 (ANIV)
20 So he got up and went to his father. “But while he was still a long way off, his father saw him and was filled with compassion for him; he ran to his son, threw his arms around him and kissed him.
21 “The son said to him, ‘Father, I have sinned against heaven and against you. I am no longer worthy to be called your son.’ [1]
22 “But the father said to his servants, ‘Quick! Bring the best robe and put it on him. Put a ring on his finger and sandals on his feet. 23 Bring the fattened calf and kill it. Let’s have a feast and celebrate. 24 For this son of mine was dead and is alive again; he was lost and is found.’ So they began to celebrate.

[1]
Some early manuscripts, son. Make me like one of your hired men.

LIGHTING NOTES:
Scene 04 – Return home – Indeterminate – diffused sunlight from above
The sky is shown here as blue with clouds to reflect the better conditions of the father’s estate.

CHARACTERS PRESENT:
Scene 04 – Return home – The young son, his father & a happy dog! the blue bird on a rock.

Notice the blue bird in every picture, ever present with the younger son, no matter what situation he is in. The bird represents God/Jesus who is with each of us where ever we go.

Notice that the prodigal son has no sandels on his feet. I’ve drawn him with sore feet after that long journey on foot! We know that the young son had no sandels because, in verse 22 we read that his father says to a servant “bring… sandels for his feet.”