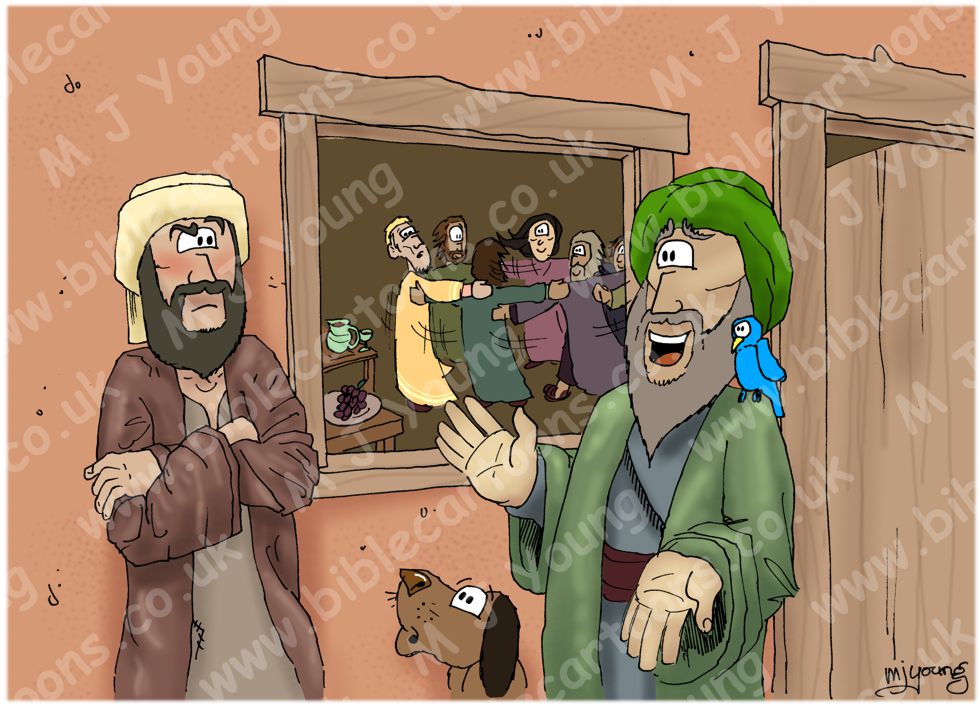 Luke 15:25-32 (ANIV)
25 “Meanwhile, the older son was in the field. When he came near the house, he heard music and dancing. 26 So he called one of the servants and asked him what was going on. 27 ‘Your brother has come,’ he replied, ‘and your father has killed the fattened calf because he has him back safe and sound.’
28 “The older brother became angry and refused to go in. So his father went out and pleaded with him. 29 But he answered his father, ‘Look! All these years I’ve been slaving for you and never disobeyed your orders. Yet you never gave me even a young goat so I could celebrate with my friends. 30 But when this son of yours who has squandered your property with prostitutes comes home, you kill the fattened calf for him!’
31 “ ‘My son,’ the father said, ‘you are always with me, and everything I have is yours. 32 But we had to celebrate and be glad, because this brother of yours was dead and is alive again; he was lost and is found.’ “

CHARACTERS PRESENT:
Scene 05 – Elder son – The young son is in a yellow robe, dancing with his sister, mother & the servants, in the house. The elder son & father (with the blue bird on his shoulder – I just couldn’t resist that one!!!) talking outside. The dog loking quizzically up at the elder son.

Notice the blue bird in every picture, ever present with the younger son, no matter what situation he is in. The bird represents God/Jesus who is with each of us where ever we go.