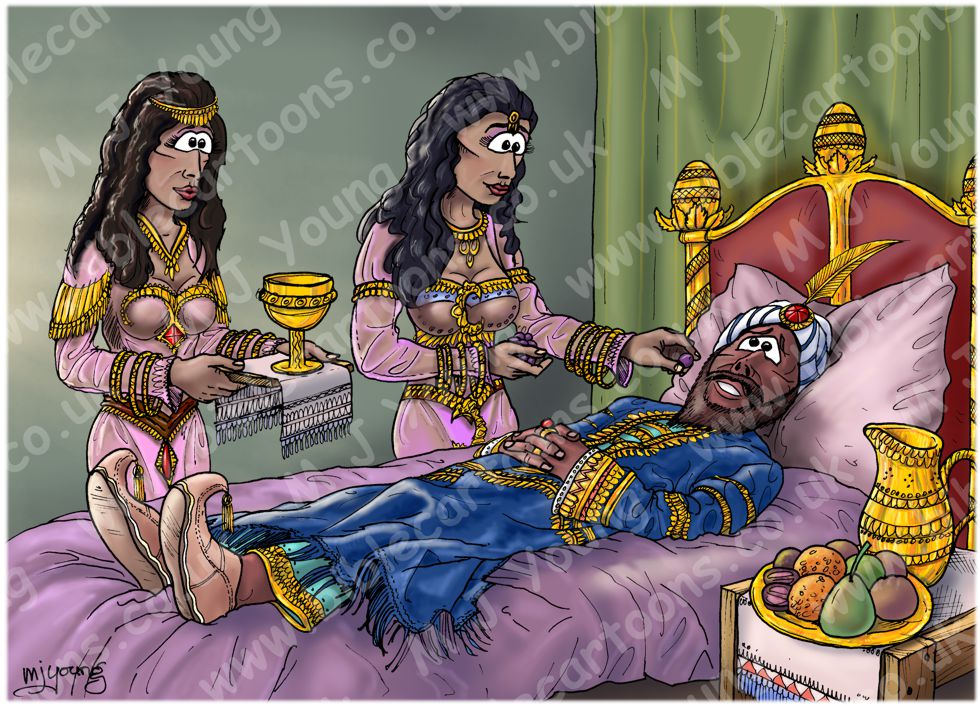 Luke 16:19 (NLT)
Jesus said, “There was a certain rich man who was splendidly clothed in purple and fine linen and who lived each day in luxury.”

LIGHTING NOTES:
Sunlight is coming in from a window or door off to the left of the scene, highlighting the left hand side of objects & casting shadows to the right.

CHARACTERS PRESENT:
The rich man lying on his couch. Two woman servants, attending to his every need & wish.

RESEARCH/ADDITIONAL NOTES:
There are 2 versions of this scene:
1) The Colour version
2) The Blue version (see next Bible Cartoon)
The Colour version has full colours displayed, without the much darker purple blue shadow overlay across them. The result is a more colourful rendering of the scene than the Blue version. Colour is more important than tone (light & shadow) in this version, even though there are still shadows to the right of objects.

I show the wealth of the rich man in this story by having him (& his servants) dressed in elaborate clothes, with much gold & finery in evidence. The rich man has soft leather shoes with gold tassels, richly ornamented gold woven into his tunic, rings & gold ornamentation on his turban, which is all further evidence of his wealth. The fact that the rich man has two servants (& many more in his house no doubt!) meeting his needs & wants is further evidence of his wealth. The food by his couch or bed side & the gold cup being served to him also show his wealth.