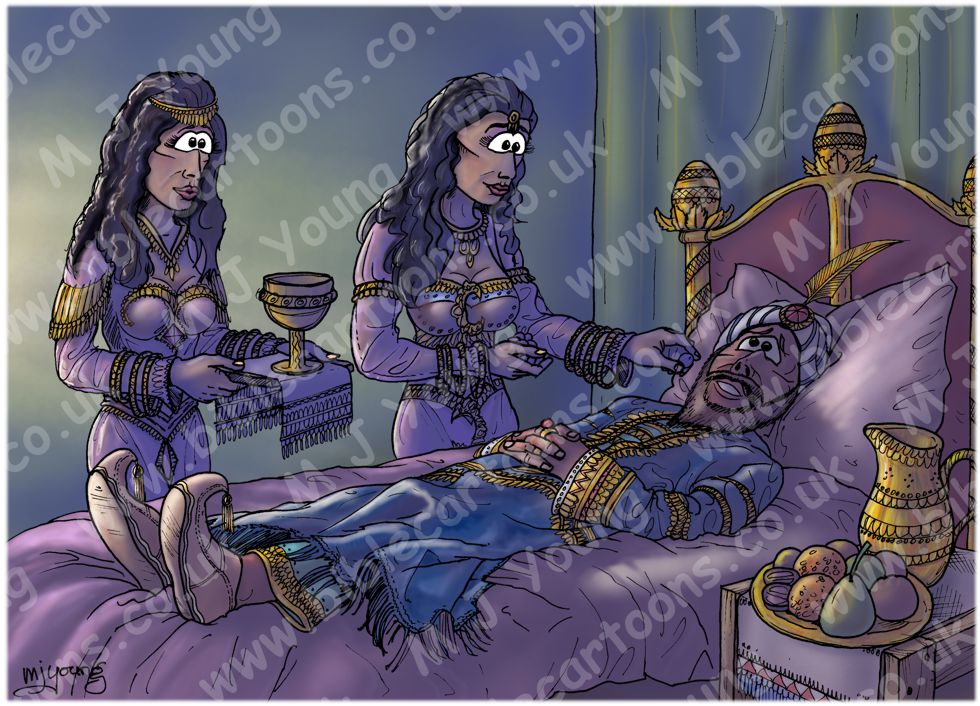 Luke 16:19 (NLT)
Jesus said, “There was a certain rich man who was splendidly clothed in purple and fine linen and who lived each day in luxury.”

LIGHTING NOTES:
Sunlight is coming in from a window or door off to the left of the scene, highlighting the left hand side of objects & casting shadows to the right.

CHARACTERS PRESENT:
The rich man lying on his couch. Two woman servants, attending to his every need & wish.

RESEARCH/ADDITIONAL NOTES:
There are 2 versions of this scene:
1) The Colour version (see previous Bible Cartoon)
2) The Blue version
The Blue version has a much darker purple blue shadow overlay across the colours beneath, which has the effect of suppressing them, darkening the scene & making it much more about tones (light & dark.) The intention is to focus the viewers attention on the sunlight coming into the scene from the left, which is particularly noticeable on the edges of the servant girls & the rich man’s shoes & clothes.

I show the wealth of the rich man in this story by having him (& his servants) dressed in elaborate clothes, with much gold & finery in evidence. The rich man has soft leather shoes with gold tassels, richly ornamented gold woven into his tunic, rings & gold ornamentation on his turban, which is all further evidence of his wealth. The fact that the rich man has two servants (& many more in his house no doubt!) meeting his needs & wants is further evidence of his wealth. The food by his couch or bed side & the gold cup being served to him also show his wealth.