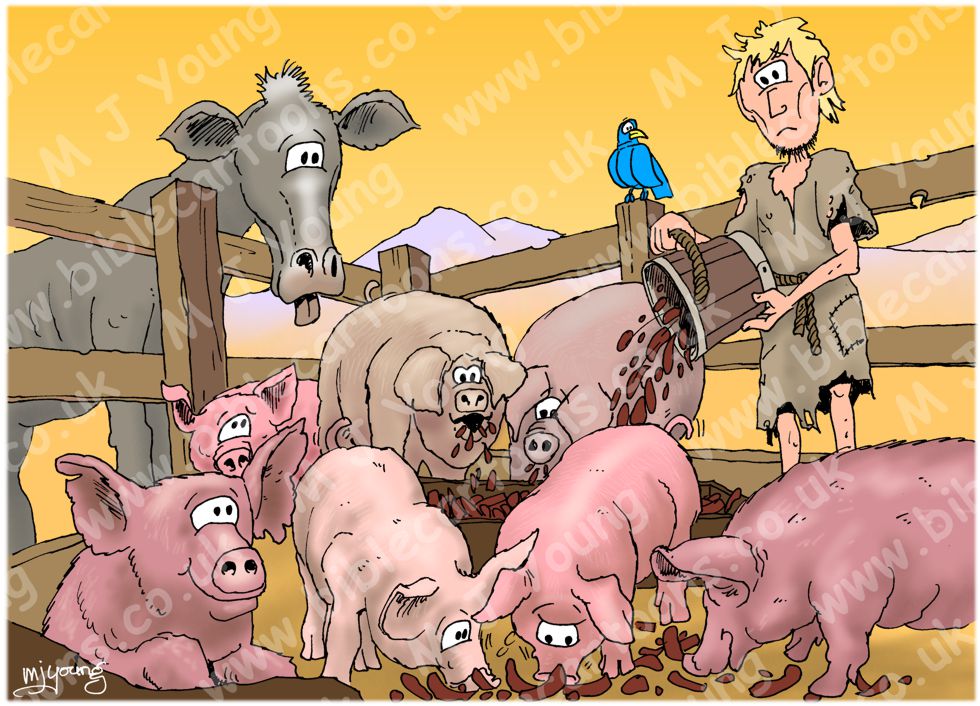 Luke 15:14-19 (ANIV)
14 After he had spent everything, there was a severe famine in that whole country, and he began to be in need. 15 So he went and hired himself out to a citizen of that country, who sent him to his fields to feed pigs. 16 He longed to fill his stomach with the pods that the pigs were eating, but no-one gave him anything.
17 “When he came to his senses, he said, ‘How many of my father’s hired men have food to spare, and here I am starving to death! 18 I will set out and go back to my father and say to him: Father, I have sinned against heaven and against you. 19 I am no longer worthy to be called your son; make me like one of your hired men.’

TIME OF DAY:
Scene 03 – With the pigs
Indeterminate – morning

LIGHTING NOTES:
Scene 03 – With the pigs
Indeterminate – diffused sunlight from above
The sky is yellow & the land shown in dry yellow tones to depict the famine that ravaged the country the younger son was in.

CHARACTERS PRESENT:
Scene 03 – With the pigs
The young son, looking thinner & with clothes in rags, a thin cow, various pigs. The blue bird, perched on a fence post.

RESEARCH/ADDITIONAL NOTES:
Notice the blue bird in every picture, ever present with the younger son, no matter what situation he is in. The bird represents God/Jesus who is with each of us where ever we go.

Some commentators suggest that the original word for the “pods” means the fruit of the ceratonia or charub tree, which grows plentifully in Syria. This kind of pulse was feed to pigs.