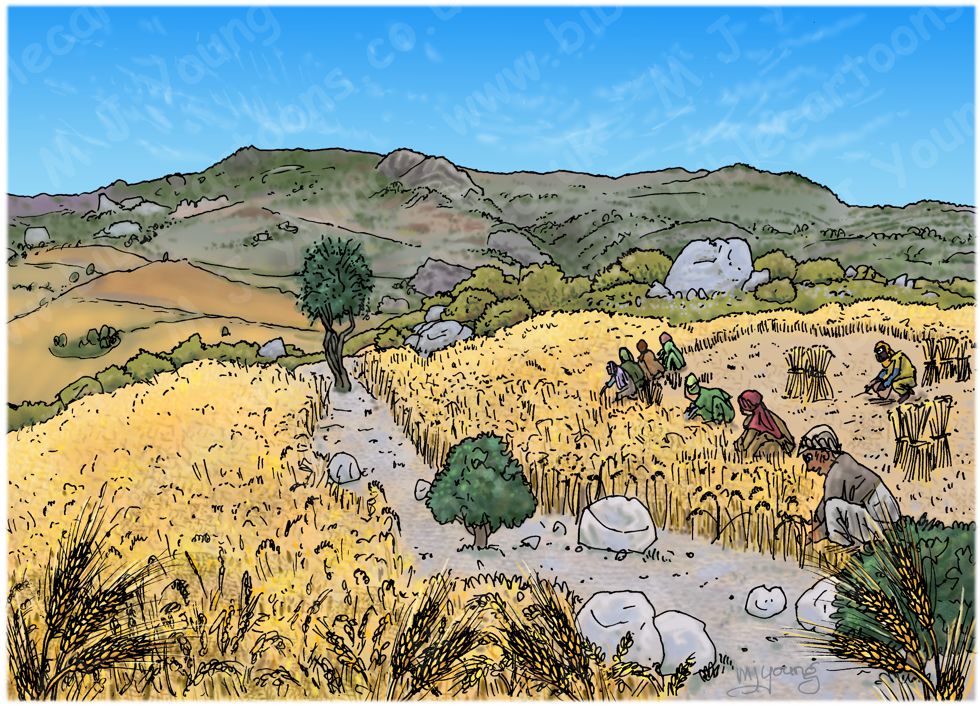 Ruth 2:23 (NLT)
So Ruth worked alongside the women in Boaz’s fields and gathered grain with them until the end of the barley harvest. Then she continued working with them through the wheat harvest in early summer. And all the while she lived with her mother-in-law.

CHARACTERS PRESENT:
Ruth is the small figure (in yellow and blue) behind the harvesters in the field. She is gleaning (picking up wheat stalks) behind Boaz’s women labourers.

RESEARCH/ADDITIONAL NOTES:
I decided to produce this scene showing Ruth gleaning behind Boaz’s women harvesters, using photo reference for the area around Bethlehem. The grey limestone rocks make an interesting contrast to the green grass, bushes, trees, and the golden wheat in the foreground fields.

Apparently the stalks of barley & wheat weren’t very long in ancient times, so I imagine that the women cutting & gathering the crops would be squatting down and moving along close to the ground, as they used sickles to cut the crop & gather it into sheaves.

I have included a small, meandering pathway between the two fields of wheat in my scene, with rocks, bushes & a tree being used to mark field edges.

I have included a close-up wheat motif in the bottom foreground, which is mirrored around the centre, vertical axis (compare the left hand side to the right hand side to see that the large wheat heads are identical, but mirror images of each other). This is the first time I have done that in a Bible Cartoon!