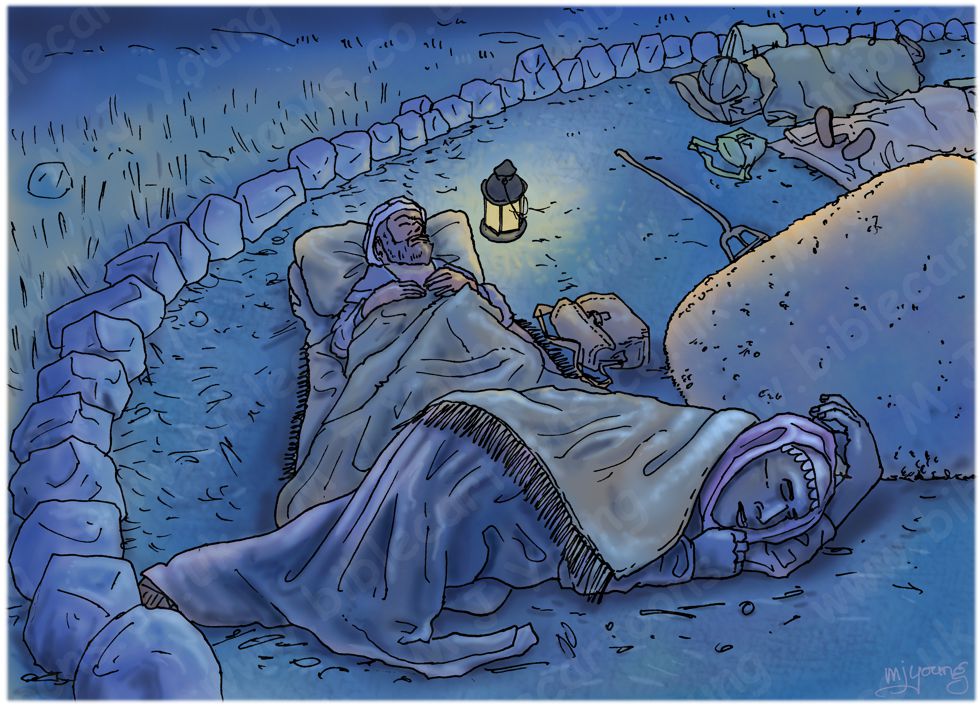 Ruth 3:1-7 (NLT)
Ruth at the threshing floor
1 One day Naomi said to Ruth, “My daughter, it’s time that I found a permanent home for you, so that you will be provided for. 2 Boaz is a close relative of ours, and he’s been very kind by letting you gather grain with his young women. Tonight he will be winnowing barley at the threshing floor. 3 Now do as I tell you—take a bath and put on perfume and dress in your nicest clothes. Then go to the threshing floor, but don’t let Boaz see you until he has finished eating and drinking. 4 Be sure to notice where he lies down; then go and uncover his feet and lie down there. He will tell you what to do.”
5 “I will do everything you say,” Ruth replied. 6 So she went down to the threshing floor that night and followed the instructions of her mother-in-law. 7 After Boaz had finished eating and drinking and was in good spirits, he lay down at the far end of the pile of grain and went to sleep. Then Ruth came quietly, uncovered his feet, and lay down.

TIME OF DAY:
At night, some time before midnight.

LIGHTING NOTES:
There are two sources of light that illuminate this scene. The first is the unseen moon, above the scene, which casts a cool blue/white light upon the figures and objects below. The second light source is a lamp beside Boaz, which casts a warmer, yellow light into the scene. I imagine that Boaz has somehow reduced the light level, so that he and his labourers can get to sleep!

CHARACTERS PRESENT:
The foreground figure is Ruth, who is curled up on the threshing floor. My research indicates that this space was a level, circular area 25 to 40 feet (7.5 to 12 metres) in diameter (see notes on page 2 scenes previous “Ruth 02 – Harvesting – Scene 05 – Ruth returns to Naomi” for fuller details).
The figure of Boaz, behind Ruth, is foreshortened quite a lot, creating the illusion of his body receding strongly into the distance.
We can see two other labourers in the top right hand corner of the scene, sleeping.

RESEARCH/ADDITIONAL NOTES:
Boaz was described in the book of Ruth as a wealthy man; as such I imagine he could afford some comfortable blankets and pillows, which is why I have drawn him on/in them! Notice that Ruth has positioned herself to sleep at Boaz’s feet, just as Naomi (her mother-in-law) directed her to do. Although it is difficult to see, I have put Ruth in a pink dress & head scarf: her “nicest clothes” (see verse 3 above!)

Remember that Israel had been in the grip of a famine, which is recorded in Ruth chp 1. Now, some time later, the famine is over. For this reason I imagine Boaz would most likely be in (very) high spirits. If this was the first harvest since the famine had set in, we can imagine Boaz’s joy & gratitude towards the Lord, for bring him a harvest. Notice the large pile of grain in the middle of the threshing floor. I have even placed a winnowing folk on the floor.