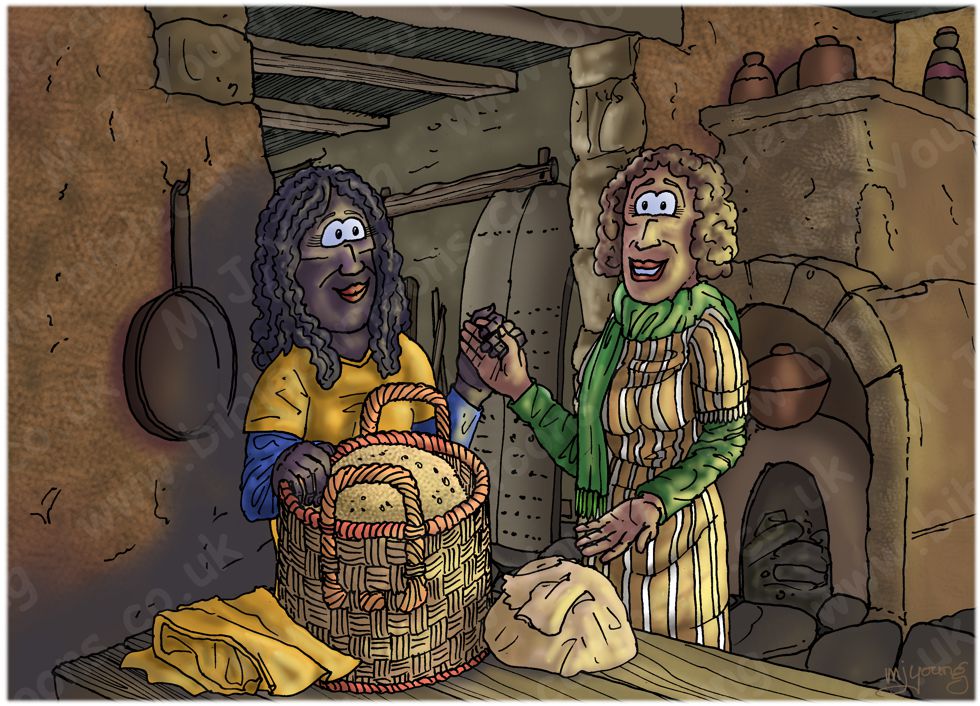 Ruth 2:15-22 (NLT)
15 When Ruth went back to work again, Boaz ordered his young men, “Let her gather grain right among the sheaves without stopping her. 16 And pull out some heads of barley from the bundles and drop them on purpose for her. Let her pick them up, and don’t give her a hard time!”
17 So Ruth gathered barley there all day, and when she beat out the grain that evening, it filled an entire basket. [1] 18 She carried it back into town and showed it to her mother-in-law. Ruth also gave her the roasted grain that was left over from her meal. 19 “Where did you gather all this grain today?” Naomi asked. “Where did you work? May the Lord bless the one who helped you!” So Ruth told her mother-in-law about the man in whose field she had worked. She said, “The man I worked with today is named Boaz.”
20 “May the Lord bless him!” Naomi told her daughter-in-law. “He is showing his kindness to us as well as to your dead husband. [1] That man is one of our closest relatives, one of our family redeemers.”
21 Then Ruth [2] said, “What’s more, Boaz even told me to come back and stay with his harvesters until the entire harvest is completed.”
22 “Good!” Naomi exclaimed. “Do as he said, my daughter. Stay with his young women right through the whole harvest. You might be harassed in other fields, but you’ll be safe with him.”

LIGHTING NOTES:
This scene is set inside Naomi’s home. There are two sources of light which illuminate this scene: pale white/yellow sunlight & warmer yellow torch light. The pale sunlight is coming from the adjoining room, and projects a pale white light onto the left edges of the figures and objects. The yellow light is coming from a torch (unseen and off to the right of this scene) near the table in the foreground. It projects yellow light onto the right hand side of the figures and objects in this scene.

CHARACTERS PRESENT:
Ruth is on the left, and Naomi (her mother-in-law) is on the right.

RESEARCH/ADDITIONAL NOTES:
I have drawn quite a few external scenes in the countryside for this series and so decided it would be nice to show Ruth returning to Naomi’s home, in the early evening. I was keen to draw a nice interior of Naomi’s house, with many of the trappings typically seen in a dwelling from Biblical times.

Ruth 02:17-18 informs us that Ruth went back to Bethlehem, with a large basket of barley grain, which we can see on the wooden kitchen table. It also informs us that she brought back her uneaten roasted grain from her meal time, which is in the grey/brown bag next to the basket.

Notice that I decided to illustrate both women without their headscarves. I imagine that women who had to wear a head scarf all day long whilst outside (in public view) might be very glad of removing it once they are in their own home! Beside the basket Ruth has returned with is her yellow head scarf, whilst Naomi’s usual dark green one is not visible in this scene, she still has a green neck scarf on though!

Here’s the scene, without the figures. 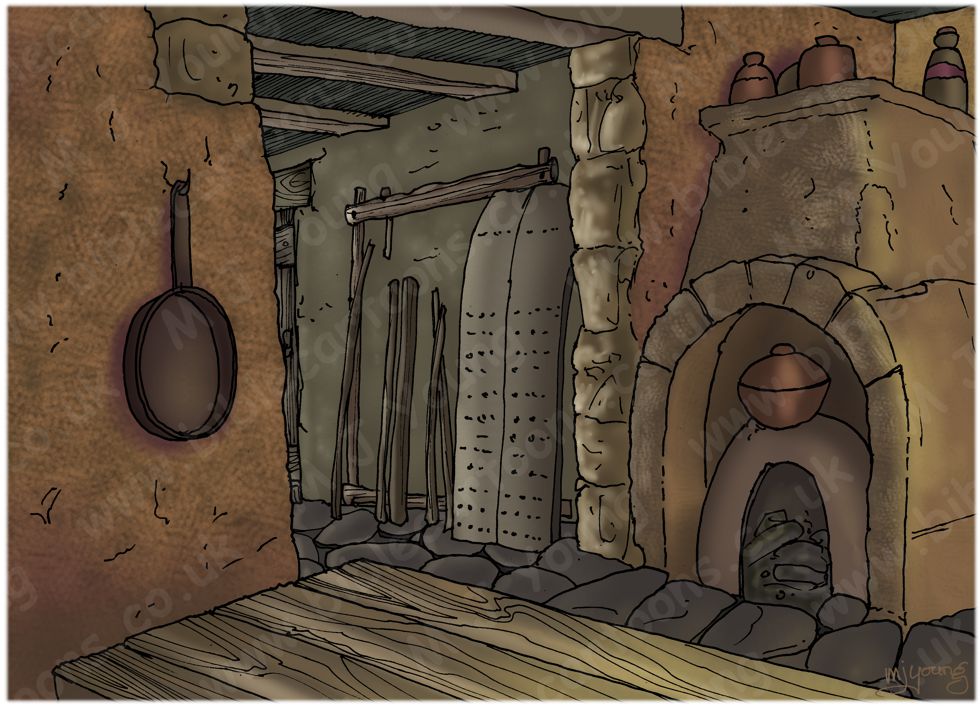 Without the figures you can see the kitchen behind. There is a simple fire in a domed stone enclosure, which is itself set into plaster covered hearth/chimney. Simple, dark flagstones cover the floor. In the room beyond the kitchen you can see various agricultural implements on a wooden frame, with a threshing sledge (see notes on agriculture below) by the archway that leads into the kitchen. A large iron frying pan hangs on the plaster covered stone wall behind Ruth. Notice also an assortment of ceramic storage jars on top of the oven/chimney assembly, in the top right of the scene.

Threshing, the Threshing Sledge, Agricultural practices in ancient Biblical times.
Agricultural practices are briefly described in Isaiah chp 28 as follows:
Isaiah 28:26-29 (NLT)
26 The farmer knows just what to do, for God has given him understanding. 27 He doesn’t thresh all his crops the same way. A heavy sledge is never used on dill; rather, it is beaten with a light stick. A threshing wheel is never rolled on cumin; instead, it is beaten softly with a flail. 28 Bread grain is easily crushed, so he doesn’t keep on pounding it. He threshes it under the wheels of a cart, but he doesn’t pulverize it. 29 The LORD Almighty is a wonderful teacher, and he gives the farmer great wisdom.

When crops such as barley and wheat were ready to be harvested in ancient Biblical times it was a labour-intensive job. The crops were cut by hand with a sickle by many workers, often women did this back-breaking task. The cut stalks were gathered, bound & stood in stooks (a group of sheaves of grain stood on end in a field).

In order to separate the grain from the husk (chaff) & straw, a threshing-floor was made ready. Constructed in the fields, the site of the floor was preferably in an exposed position to use the wind to separate the grain from the chaff (the unwanted husks surrounding the grain) during the winnowing process (see below). The threshing-floor was a level, circular area 25 to 40 feet (7.5 to 12 metres) in diameter. Stones on the ground surface would be removed, and then the circle would be tamped down &/or coated with marly clay. A border of stones keep the grain in this enclosure.

The method of threshing involved the trampling effect of oxen or donkey hoofs as these animals were driven around the floor, or by the use of a drag or threshing-sledge. A threshing sledge is a piece of man-made agricultural equipment: several planks of wood where bound together, with a curved front edge. Iron nails or bits of stone (eg flint) were attached to the planks to make the surface rough. The sledge was usually weighted with stones, and pulled around the threshing floor by oxen or donkeys. The sledge and animal’s hooves chopped up the straw & tended to separate out the grain and chaff (the husks of the seed).

For more tender cereal grains or for smaller quantities of grain, flails were used for threshing, rather than sledge-pulling animals.

Winnowing was done with a broad shovel or a wooden fork with bent prongs. It involved repeatedly throwing the straw, husks, and grain into the air & letting the wind separate the lighter chaff (straw & husks) from the heavier grain. Winnowing was often done in the evening, when a breeze was more likely to occur. The chaff and stubble were burned (see Isaiah 5:24 & Matthew 3:12). After winnowing, the grain was tossed in a wooden tray to separate it from the stones and lumps of soil which clung to the roots when the grain was reaped. The stones being heavier than the grain made it possible to separate the two. The grain was typically stored in ceramic jars, usually for making into roasted grain or bread, the main staple of the ancient world.