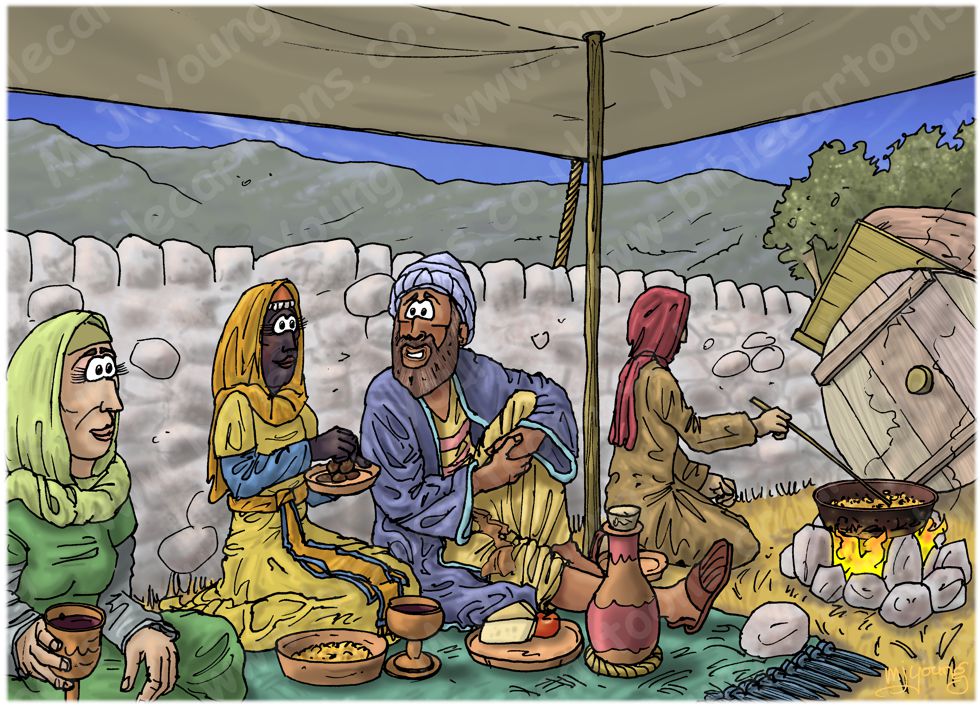 Ruth 2:14 (NLT)
At mealtime Boaz called to her, “Come over here, and help yourself to some food. You can dip your bread in the sour wine.” So she sat with his harvesters, and Boaz gave her some roasted grain to eat. She ate all she wanted and still had some left over.

TIME OF DAY:
Unspecified in the Bible text. The foreman refers to Ruth’s request to glean in the morning, so I have set this scene just before mid-day.

CHARACTERS PRESENT:
From left to right: one of the female workers employed by Boaz to bring his harvest in. Ruth in yellow and blue robes, kneeling down. Boaz, in blue outer robe, sitting next to Ruth. Another female worker, stirring grain in a pan over a camp fire.

RESEARCH/ADDITIONAL NOTES:
This scene shows Ruth kneeling next to Boaz and his harvest workers beneath a canopy shelter. Boaz invited Ruth to join him and his workers at mealtime, which I take to mean at mid day.

Many of the elements in this scene are also included in previous scenes: the canopy shelter, the stone wall, part of a wooden cart/wagon used to transport the harvest sheaves from the field to the threshing floor, the Olives trees, mountains in the background and the blue sky. The characters seen in this picture are all from previous scenes(s) too.

The woman next to the wooden cart/wagon is roasting some barley grain in a metal pan, over a camp fire…

What is roasted (or parched) grain?
“One (of four) root words for the term “parched” is qalah, meaning “roasted.” This word is applied to corn or pulse. It is a common practice in Palestine and Syria to roast the nearly ripe wheat for eating as a delicacy. A handful of heads of fully developed grain, with the stalks still attached, are gathered and bound together and then, holding the bunch by the lower ends of the stalks, the heads are toasted over a fire of straw or thorn bush. By the time most of the sheaths are blackened the grain is toasted, and, after rubbing off the husks between the hands, is ready to eat (Leviticus 2:14). A form of pulse is toasted in the same way and is more sought after than the grain. In the larger towns and cities, venders go about the streets selling bunches of toasted chick-peas. The Bible references, however, are probably to another form of roasted grain. The threshed wheat or pulse is roasted over a fire on an iron pan or on a fiat stone, being kept in constant motion with a stirrer until the operation is finished. The grain thus prepared is a marketable article. Parched grain is not now so commonly met with as the pulse, which either roasted or unroasted is called chommoc (from Arabic “to roast” or “parch”). Parched pulse is eaten not only plain, but is often made into confection by coating the seeds with sugar. In Bible times parched wheat or pulse was a common food, even taking the place of bread (Leviticus 23:14 Joshua 5:11 Ruth 2:14). It was a useful food supply for armies, as it required no further cooking (1 Samuel 17:17). It was frequently included in gifts or hostages (1 Samuel 25:18 2 Samuel 17:28).”
[Source: International Standard Bible Encyclopedia]

Bible references relating to parched/roasted grain.
Leviticus 2:14 (NLT)
If you present a grain offering to the LORD from the first portion of your harvest, bring fresh grain that is coarsely ground and roasted on a fire.

Leviticus 23:14 (NLT)
Do not eat any bread or roasted grain or fresh kernels on that day until you bring this offering to your God. This is a permanent law for you, and it must be observed from generation to generation wherever you live.

Joshua 5:11 (NLT)
The very next day they began to eat unleavened bread and roasted grain harvested from the land.

1 Samual 17:17 (NLT)
One day Jesse said to David, “Take this basket of roasted grain and these ten loaves of bread, and carry them quickly to your brothers.

1 Samual 25:18 (NLT)
Abigail wasted no time. She quickly gathered 200 loaves of bread, two wineskins full of wine, five sheep that had been slaughtered, nearly a bushel of roasted grain, 100 clusters of raisins, and 200 fig cakes. She packed them on donkeys…