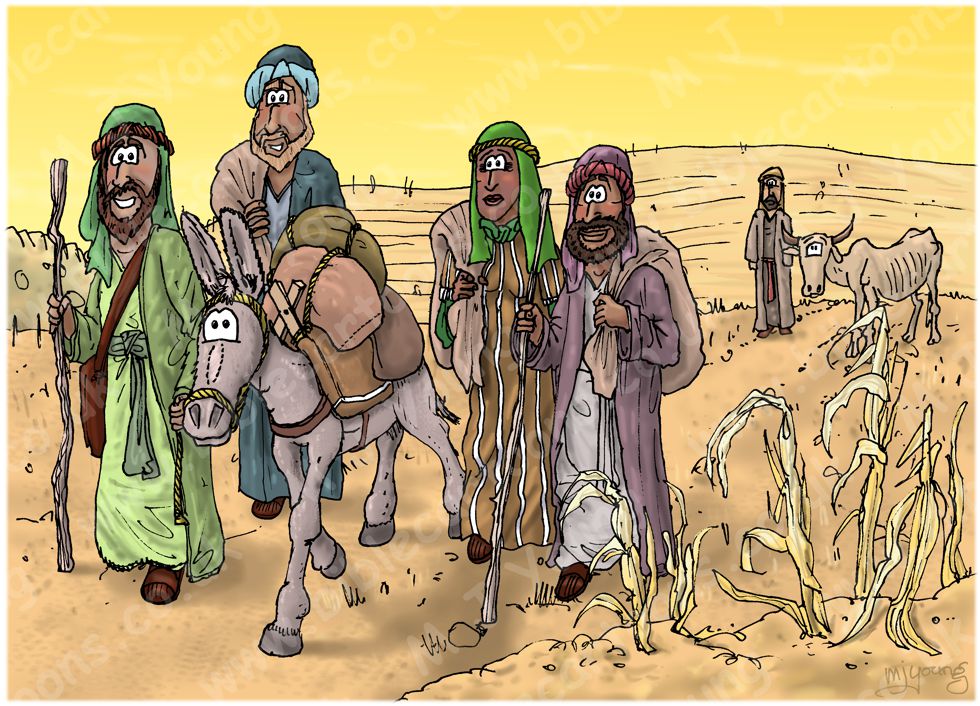 Ruth 1:1-2 (NLT)
1 In the days when the judges ruled in Israel, a severe famine came upon the land. So a man from Bethlehem in Judah left his home and went to live in the country of Moab, taking his wife and two sons with him. 2 The man’s name was Elimelech, and his wife was Naomi. Their two sons were Mahlon and Kilion. They were Ephrathites from Bethlehem in the land of Judah. And when they reached Moab, they settled there.

TIME OF DAY:
Unspecified in Bible verses above. I have set the time in the early morning.

LIGHTING NOTES:
The sun (unseen, above & left) casts shadows to the right of figures & objects in this scene.

CHARACTERS PRESENT:
From left to right: Elimelech (the husband of Naomi) leading their donkey, Mahlon (son of Elimelech & Naomi), Naomi and Kilion (their other son).
In the background is a Hebrew farmer with a very thin, starving cow.

RESEARCH/ADDITIONAL NOTES:
I wanted the colours in this scene to reflect the harshness of a famine, so have used yellows & oranges, giving the impression of lifeless earth. The sky is also yellow, to continue the theme of a famine-stricken landscape. The background farmer & think cow are further visual clues to the famine.

This scene shows the family setting out from famine-stricken Israel, heading to Moab, which was a land South East of the Dead Sea. 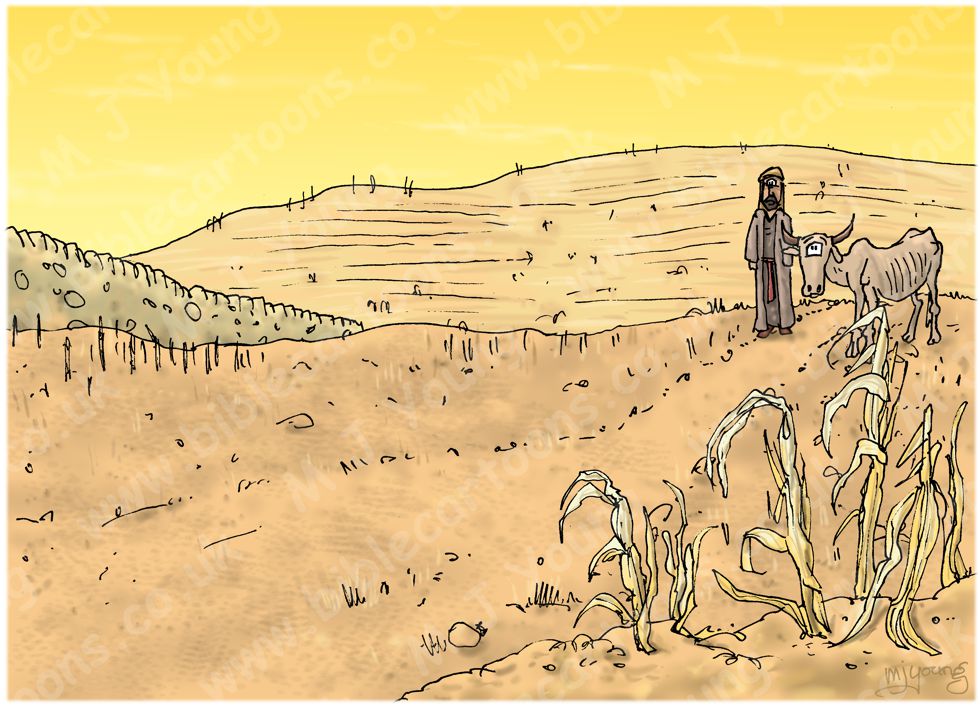 The Arnon river & gorge has always been an important boundary-line, separating the Moabites from the Amorites (Num. 21:13, 26; Deut. 3:8; Judges 11:18). After the Hebrew invasion of Canaan, the Arnon divided Moab from the tribes of Reuben and Gad (Deut. 3:12, 16). Actually Moab lay as much to the north of the Arnon as to the south! To the north, for example, were Aroer, Dibon, Medeba, and other Moabite towns. Even under Omri and Ahab, who held part of the Moabite territory, Israel did not hold sway farther south than Ataroth, about ten miles north of the Arnon.

Water has cut several impressive chasms or gorges in the rocks leading down to the Dead Sea, the principal one being the gorge of the river Arnon, which is about 1,700 ft. deep and 2 or more miles in width at the level of the tableland, but very narrow, with steep banks at the bottom. These gorges provide good protection from invading armies, having such steep sides that it would be very difficult for anyone to cross them, except in their upper courses near the desert where they become shallow.

Rain falls in winter only, but is usually sufficient to mature crops. The fountains and streams in the valleys and on the slopes near the Dead Sea are numerous, whereas the uplands/tableland are almost destitute of flowing water. The human inhabitants supply themselves by means of cisterns dug into the rocks, many of which are ancient.

The limestone hills which form the almost treeless plateau are quite fertile. In the spring they are covered with grass; and the table-land itself produces grain.

Deuteronomy 2:10-11 informs us that the Moabites displaced the previous occupants of their land, which they called the Emim.