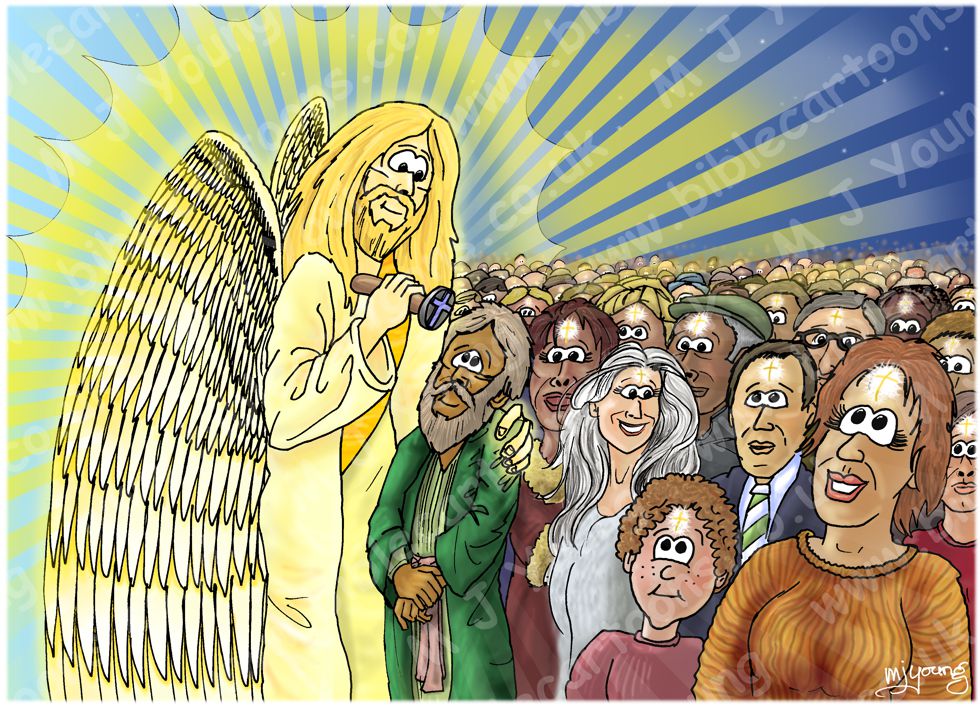 LIGHTING NOTES:
The angel with the Lord’s seal is the primary source of light in this scene.

CHARACTERS PRESENT:
The angel with the Lord’s seal. A vast crowd of Christians, with the seal on their foreheads of the servants of God. One man, in green, is just about to be sealed by the angel.

RESEARCH/ADDITIONAL NOTES:
I decided to draw some of the people in the crowd in modern clothing (e.g. the woman in gold in the right foreground) and some in my more usual, ancient clothing (e.g. the man in green, who is just about to be sealed by the angel).

I decided to make the seal look like one of those wood and metal seals, which used to be used to stamp hot wax with a decorative seal design (and so close a letter or document and keep its contents secret) before sticky envelopes and self-sealing envelopes were invented.
My seal has a cross embossed on its surface, and it is imparting a glowing, golden cross onto the servants of the Lord God.
I decided to make the cross seals on believer’s foreheads stand out a bit more by adding white starry glows beneath the gold cross seal shape.

It took quite a while to colour up all those faces in this picture!

Some interesting points are made in the Bible Knowledge Commentary:

“7:1-3. The question was raised in 6:17 whether any would be saved in the Tribulation. This is answered in this chapter, and two classes of the saved are mentioned specifically: (1) those who are saved in Israel, (2) those of all nations who, though saved spiritually, are martyred. Four angels were told to withhold judgment on the earth until the servants of… God were sealed (v. 3). The seal on their foreheads symbolizes protection and ownership and God’s intention to protect the 12 tribes that are mentioned, much as He protected Noah from the Flood, Israel from the plagues of Egypt, and Rahab and her household in Jericho.

Attempts have been made to identify the 12 tribes here with the church, mostly to avoid the implication that this is literally Israel. The fact that specific tribes were mentioned and specific numbers from each tribe were indicated would seem to remove this from the symbolic and to justify literal interpretation. If God intended these verses to represent Israel literally, He would have used this means. Nowhere else in the Bible do a dozen references to the 12 tribes mean the church. Obviously Israel will be in the Tribulation, and though men do not know the identification of each tribe today, certainly God knows.

Much speculation has arisen about why the tribe of Dan is omitted. Joseph and one of his two sons, Manasseh, are listed, but Ephraim, Joseph’s other son, is omitted. Thus if Dan were included, there would have been 13 tribes. According to J.B. Smith, Scripture contains 29 lists of the tribes of Israel in the Old and New Testaments and in no case are more than 12 tribes mentioned (A Revelation of Jesus Christ, p. 130). The tribe omitted was usually Levi, from which the priesthood came. Inasmuch as it is normal to have only 12 and not 13 tribes, the omission of Dan is not significant. Perhaps Dan was omitted here because it was one of the first tribes to go into idolatry (Jud. 18:30; cf. 1 Kings 12:28-29). However, Dan is mentioned in Ezekiel 48:2 in the millennial land distribution.

The most important fact taught here is that God continues to watch over Israel even in the time of Israel’s great distress. There is no justification whatever for spiritualizing either the number or the names of the tribes in this passage, to make them represent the church.”
[Source: Bible Knowledge Commentary] 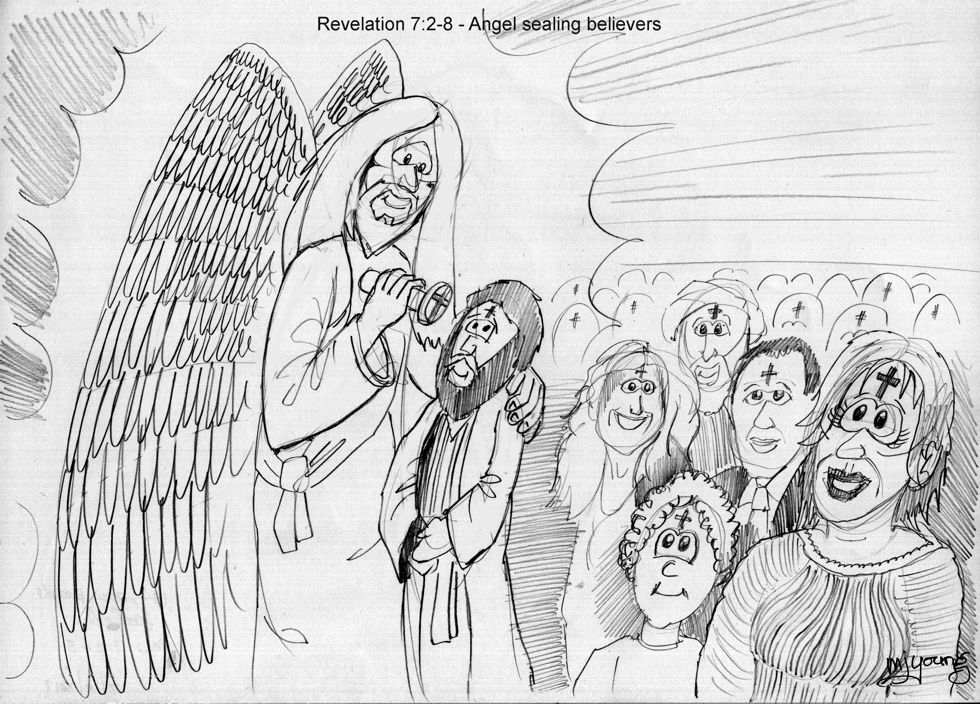 Close-up of some of the people in this cartoon, showing the seal mark on their foreheads. 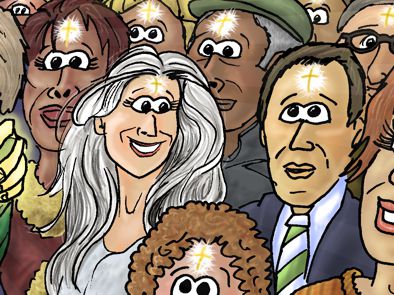