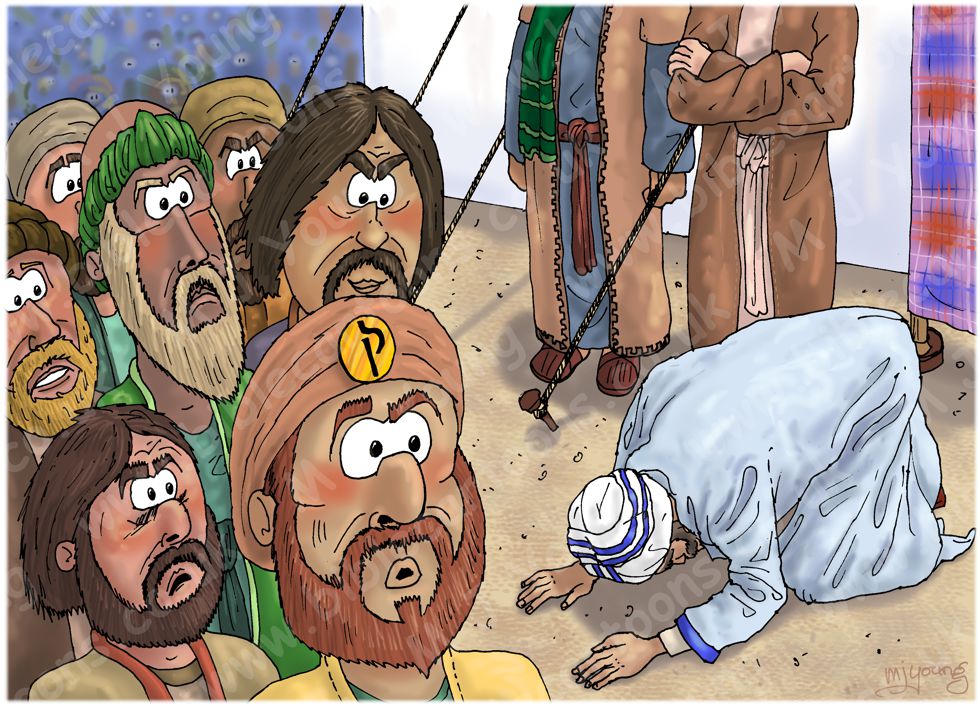 Numbers 16:4-11 (ANIV)
4 When Moses heard this, he fell face down. 5 Then he said to Korah and all his followers: “In the morning the Lord will show who belongs to him and who is holy, and he will make that person come near him. The man he chooses he will cause to come near him. 6 You, Korah, and all your followers are to do this: Take censers 7 and tomorrow put fire and incense in them before the Lord. The man the Lord chooses will be the one who is holy. You Levites have gone too far!”

8 Moses also said to Korah, “Now listen, you Levites! 9 Isn’t it enough for you that the God of Israel has separated you from the rest of the Israelite community and brought you near himself to do the work at the Lord’s tabernacle and to stand before the community and minister to them? 10 He has brought you and all your fellow Levites near himself, but now you are trying to get the priesthood too. 11 It is against the Lord that you and all your followers have banded together. Who is Aaron that you should grumble against him?”

LIGHTING NOTES:
Sunlight (above & to the right) illuminates this scene, casting shadows to the left of figures & objects.

CHARACTERS PRESENT:
I have included a lot more of the 250 other Israelte leaders in this scene, who are standing behind the 4 chief rebels on the left hand side of the picture.
Of the 4 main rebels in the left foreground, from left to right: On son of Peleth (the little man in front), Abiram son of Eliab (brother of Dathan; wearing green & brown turban), Dathan son of Eliab (brother of Abiram; in purple outer robe) is behind Korah son of Izhar, the son of Kohath, the son of Levi (wearing yellow & blue fringed outer robe).
On the right of the picture is Moses (in pale blue outer robe & white turban with 2 blue stripes), who has fallen face down (see verse 4 above), with Aaron (in brown outer robe) & Joshua, son of Nun (in green scarf & turban) to Moses right.

RESEARCH/ADDITIONAL NOTES:
This is the second scene in the set illustrating the rebellion of Korah, Dathan, Abiram, On & others against Moses and Aaron.

Moses is on the right, having bowed down on the ground (see verse 4). To his right is Aaron & Moses.

Again, I enjoyed drawing the expressions on the faces of the people in this scene. The four opponents of Moses ( Korah, Dathan, Abiram & On) on the left of the picture all look rather cross, angry & aggrieved with Moses. In this picture though I have made Korah’s expression one of puzzlement, as Moses has suddenly bowed low to the ground! We can’t see Moses, Aaron or Joshua’s expressions at this time.

Moses, Aaron & Joshua I have drawn previously, so I used the features, clothes & colouring I have already established for them. The 4 opponents of Moses are new figures, which (until Scene 01) I hadn’t drawn previously. Scene 01 has been the basis for their features, expressions, clothing & colourings for this & subsequent scenes in which they appear.

Notice the gold pendant on Korah’s hat, which includes the first Hebrew letter of his name.