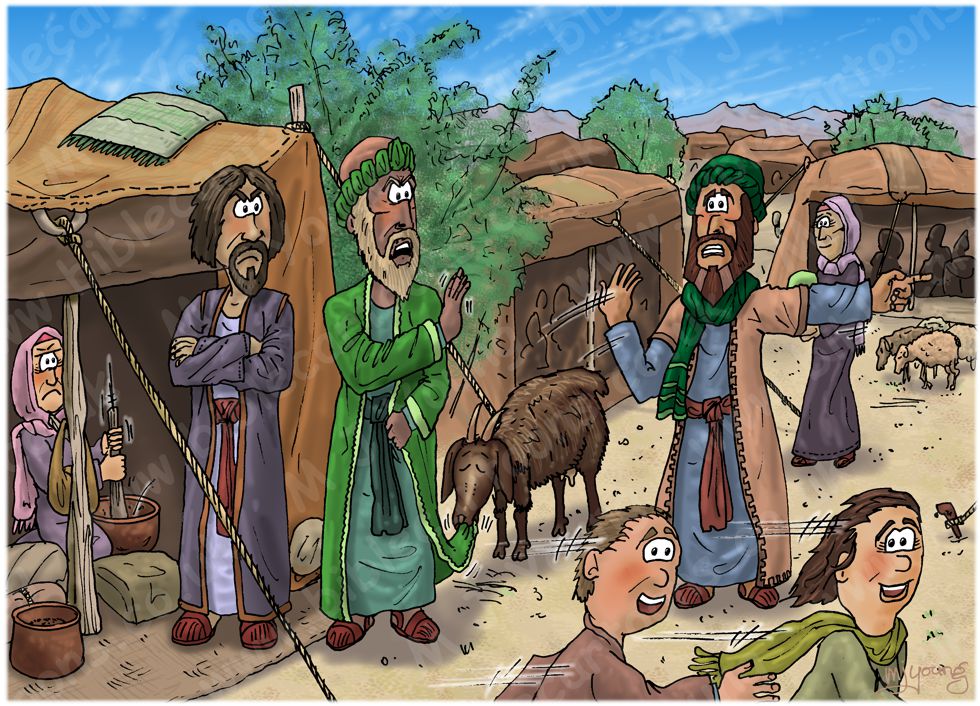 Numbers 16:12-14 (ANIV)
12 Then Moses summoned Dathan and Abiram, the sons of Eliab. But they said, “We will not come! 13 Isn’t it enough that you have brought us up out of a land flowing with milk and honey to kill us in the desert? And now you also want to lord it over us? 14 Moreover, you haven’t brought us into a land flowing with milk and honey or given us an inheritance of fields and vineyards. Will you gouge out the eyes of [1] these men? No, we will not come!”

LIGHTING NOTES:
Sunlight (above & to the left) illuminates this scene, casting shadows to the right of figures & objects.

CHARACTERS PRESENT:
From left to right: a woman in a tent preparing food, Dathan son of Eliab (brother of Abiram; in purple outer robe), Abiram son of Eliab (brother of Dathan; wearing green & brown turban), Joshua, son of Nun (in green scarf & turban).
In the foreground are two Hebrew children running & playing tag… I’m pretty sure children have always done that!
There is a woman in a purple robe, carrying some green food, behind Joshua.
Various Hebrew people in tents & around the camp.

RESEARCH/ADDITIONAL NOTES:
This is the third scene in the set illustrating the rebellion of Korah, Dathan, Abiram, On & others against Moses and Aaron. Joshua son of Nun (Moses’s assistant) has been sent to summon Dathan & Abiram (the sons of Eliab). We can see Joshua beckoning to the brothers, & pointing towards the Tent of Meeting which was positioned at the centre of the Hebrew camp (out of view). For their part, Dathan & Abiram are refusing to go to Moses at the Tent of Meeting. Dathan has his arms folded & Abiram is holding a hand up in refusal towards Joshua.

Dathan & Abiram have expressions of refusal & anger on their faces, whilst I have made Joshua look almost pleading towards them… no doubt he doesn’t want to let Moses down!

For notes on the characters colouring & clothing, see Scene 01.

Notice the woman kneeling down & grinding grain in the tent behind Dathan & Abiram. She might be a wife of one of these two brothers. She looks crossly at Joshua, and clearly is part of her husband’s rebellion against Moses.

Also notice the dark brown goat, in the middle of the scene, which is chewing on Abiram’s green outer robe!

We can see many tents behind the figures, stretching off towards the distant hills/mountains in the background. This is only a small part of the vast collection of tents that made up the Hebrew camp in the wilderness.