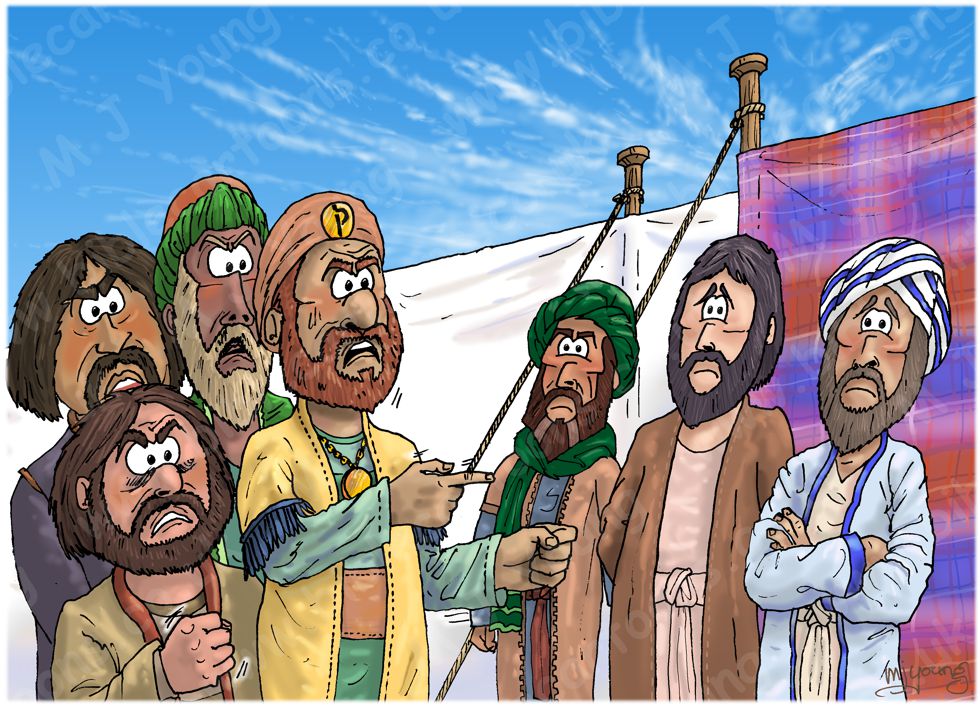 Numbers 16:1-3 (ANIV)
Korah, Dathan and Abiram
1 Korah son of Izhar, the son of Kohath, the son of Levi, and certain Reubenites—Dathan and Abiram, sons of Eliab, and On son of Peleth—became insolent [1] 2 and rose up against Moses. With them were 250 Israelite men, well-known community leaders who had been appointed members of the council. 3 They came as a group to oppose Moses and Aaron and said to them, “You have gone too far! The whole community is holy, every one of them, and the Lord is with them. Why then do you set yourselves above the Lord’s assembly?”

LIGHTING NOTES:
Sunlight (above & to the right) illuminates this scene, casting shadows to the left of figures & objects.

RESEARCH/ADDITIONAL NOTES:
This is the first scene in the set illustrating the rebellion of Korah, Dathan, Abiram, On & others against Moses and Aaron.

I enjoyed drawing the expressions on the faces of the people in this scene. The four opponents of Moses ( Korah, Dathan, Abiram & On) on the left of the picture all look rather cross, angry & aggrieved with Moses, who looks rather puzzles & apologetic! Aaron looks non-plussed, whilst Joshua looks indignant & is protective of Moses!

Moses, Aaron & Joshua I have drawn previously, so I used the features, clothes & colouring I have already established for them. The 4 opponents of Moses are new figures, which I haven’t drawn previously. This scene will be the basis for their features, expressions, clothing & colourings in future pictures including these men.

Notice the gold pendant on Korah’s hat, which includes the first Hebrew letter of his name.

16 “For the entrance to the courtyard, provide a curtain twenty cubits [5] long, of blue, purple and scarlet yarn and finely twisted linen—the work of an embroiderer—with four posts and four bases. 17 All the posts around the courtyard are to have silver bands and hooks, and bronze bases. 18 The courtyard shall be a hundred cubits long and fifty cubits [6] wide, with curtains of finely twisted linen five cubits [7] high, and with bronze bases. 19 All the other articles used in the service of the tabernacle, whatever their function, including all the tent pegs for it and those for the courtyard, are to be of bronze.