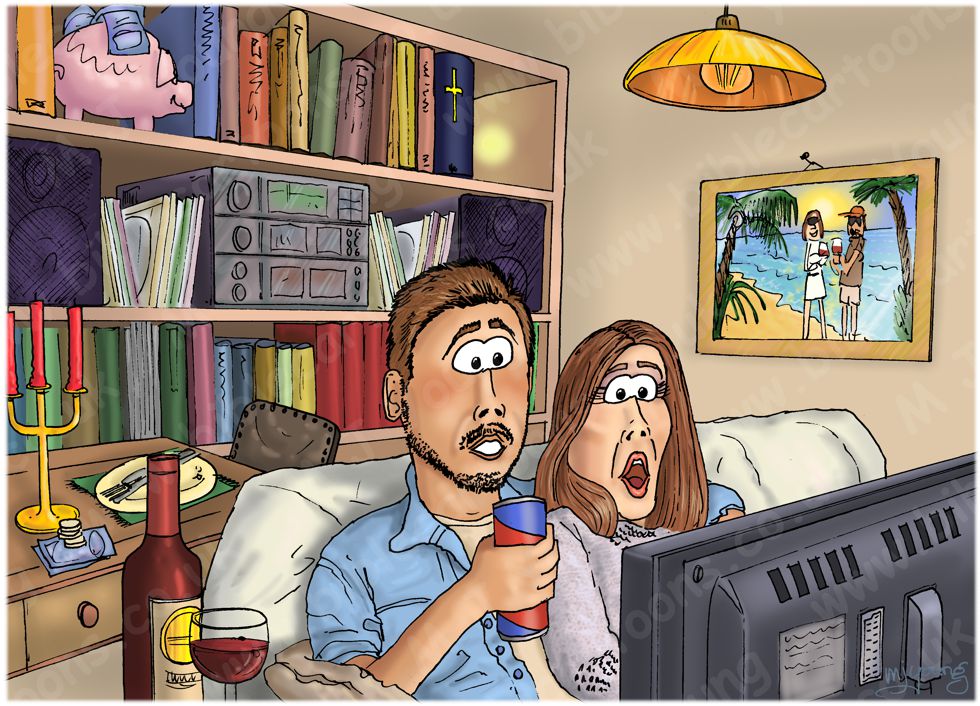 Matthew 13:22 (NLT)
22 [Jesus continue explaining his parable] “The seed that fell among the thorns represents those who hear God’s word, but all too quickly the message is crowded out by the worries of this life and the lure of wealth, so no fruit is produced.”

LIGHTING NOTES:
This scene is set inside a house; indirect sunlight illuminates the scene from the right.
The mysterious ball of light (see previous scenes) is on a shelf, faintly glowing.

RESEARCH/ADDITIONAL NOTES:
There are two versions of this scene:
01) (Previous page) Matthew 13 – Parable of the sower – Scene 09 – Lure of wealth (Ancient version).

I have created two versions of this scene, to focus on the similarities/dangers of people’s attitudes towards wealth both in ancient history/Biblical times and in modern times.

As I noted in Scene 07, I wanted some way to visually represent the seed, or message about the Kingdom (of God), which Jesus talks about in this parable. I decided to represent the gospel message (which is the same as message about the Kingdom (of God)), as a mysterious little ball of light. As in the previous scenes, the characters (man and woman) have received the good news about God’s kingdom, which is represented by the ball of light. Jesus explained in his parable that some people (like seed that grows up among thorns and thistles) are more concerned about the worries of life, and the lure of wealth, and so they don’t produce any fruit. Literally, the concerns of their daily life is more important than the Gospel message, and so they don’t demonstrate any different attitudes to the watching world, and therefore, they do not help anyone else to become a believer.

Notice the wooden display case or bookcase in the background. It is deliberately the same colour as the one in the Ancient version (see previous page), to draw attention to the same attitude of the modern day couple to their ancient/Biblical counterparts. On the top shelf of the display case or bookcase, on the right, is the mysterious ball of light. I have deliberately put it in exactly the same position as in the Ancient version scene. In the modern day scene the mysterious ball of light is floating next to a Holy Bible. The ball of light and the Bible represent the beliefs of the couple… both are forgotten on the shelf!
On the shelves and in the room are many of the possessions, items and trappings of modern life: an expensive stereo system, CD’s, albums, books, a pink piggy bank, stuffed with money. An expensive gold candelabra sits on the table behind the couple. They have an expensive bottle of red wine next to them on a costly, plush sofa. In the right background we can see a framed photograph of the couple on an exotic, sunny beach, which represents travel and all the inherent expense of overseas holidays.

In this scene we can see the couple “glued” to an expensive, wide-screen TV… they are dedicated to their own entertainment it seems! This represents their pre-occupation with their own entertainment rather than their spiritual condition. The ball of light’s fading colour represents the couple’s pre-occupation with “the things of this world”, rather than the kingdom of God. This unfruitfulness is the danger of “the worries of this life and the lure of wealth” which Jesus was talking about in the Parable of the Sower.

As in the Ancient version, the young couple in this scene are surrounded by expensive possessions and memorabilia, all of which represents “the lure of wealth” which Jesus spoke of in his parable. He wasn’t saying that wealth (holidays, possessions, etc) of itself was “bad” or evil, but the danger of wealth is that it shifts our focus away from the kingdom of God, and has the potential to distract us from the things of God. It is the distracting nature of “the worries of this life and the lure of wealth” which are so dangerous to our spiritual condition.