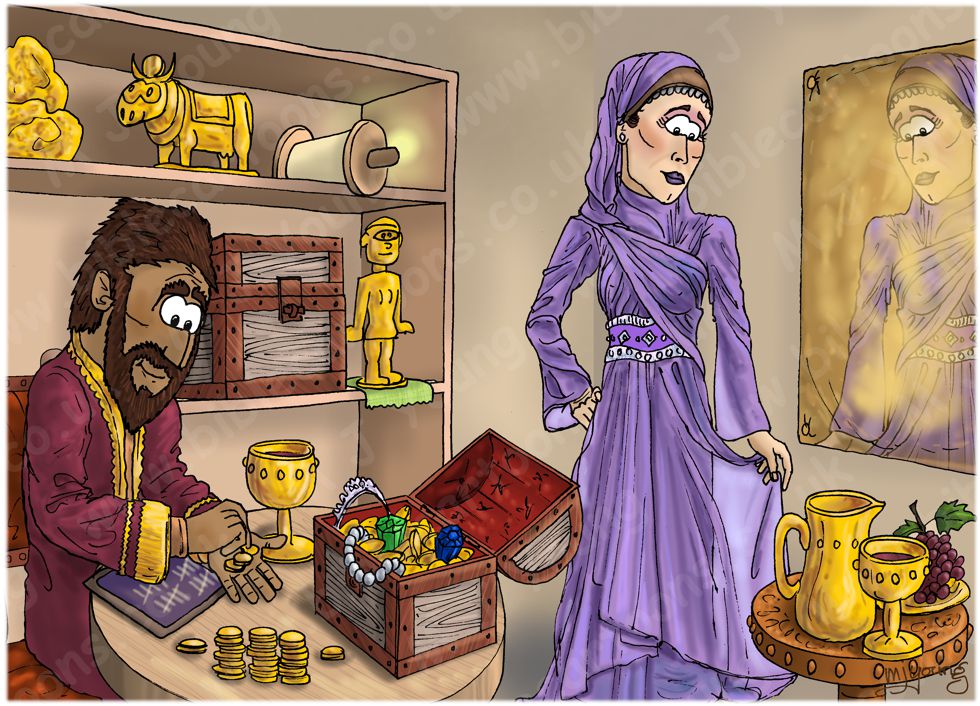 Matthew 13:22 (NLT)
22 [Jesus continue explaining his parable] “The seed that fell among the thorns represents those who hear God’s word, but all too quickly the message is crowded out by the worries of this life and the lure of wealth, so no fruit is produced.”

LIGHTING NOTES:
This scene is set inside a house; indirect sunlight illuminates the scene from the right.
The mysterious ball of light (see previous scenes) is on a shelf, faintly glowing.

RESEARCH/ADDITIONAL NOTES:
There are two versions of this scene:
01) (This page) Matthew 13 – Parable of the sower – Scene 09 – Lure of wealth (Ancient version).

I have created two versions of this scene, to focus on the similarities/dangers of people’s attitudes towards wealth both in ancient history/Biblical times and in modern times.

As I noted in Scene 07, I wanted some way to visually represent the seed, or message about the Kingdom (of God), which Jesus talks about in this parable. I decided to represent the gospel message (which is the same as message about the Kingdom (of God)), as a mysterious little ball of light. As in the previous scenes, the characters (man and woman) have received the good news about God’s kingdom, which is represented by the ball of light. Jesus explained in his parable that some people (like seed that grows up among thorns and thistles) are more concerned about the worries of life, and the lure of wealth, and so they don’t produce any fruit. Literally, the concerns of their daily life is more important than the Gospel message, and so they don’t demonstrate any different attitudes to the watching world, and therefore, they do not help anyone else to become a believer.

Notice the wooden display case or bookcase in the background. On the top shelf, on the right, is the mysterious ball of light. It is floating next to a scroll, which might contain the Torah (Old Testament). The ball of light and the scroll represent the beliefs of the couple… both are forgotten on the shelf!
On the shelves are a large nugget of gold, a gold calf idol, a gold human figure idol, and a chest (containing money, jewels, etc). There are gold drinking goblets, a gold jug of red wine, and many other trappings of this rich couple.

In this scene we can see the couple surrounded by gold, jewels, and possessing fine clothing, all of which represents “the lure of wealth” which Jesus spoke of. The man is counting coins at a table, and the woman is admiring her new purple dress in a wall-mounted metal mirror *1. Both the man and the woman are far more concerned with their gold, jewels, fine clothing and wealth, than they are with their spiritual condition. The ball of light’s fading colour represents the couple’s pre-occupation with “the things of this world”, rather than the kingdom of God. This unfruitfulness is the danger of “the worries of this life and the lure of wealth” which Jesus was talking about in the Parable of the Sower.

*1
In ancient/Biblical times mirrors where simply polished flat metal plates. They were rather reflective surfaces, which is why my version in the scene above seems so dull and dim.

A note about mirrors.
“Reflective surfaces made of polished obsidian are the oldest “mirrors” in the archaeological record, dating back as far as 4000 BCE. The first evidence of mirrors as grooming tools dates to the 5th century B.C., in illustrations of elegant Greeks gazing at hand mirrors (these illustrations are found on antique pottery). These mirrors, made from a polished metal disk attached to a handle, did not contain any glass. The first real glass mirrors in the record are from the 3rd century AD, consisting of extremely small (a few square inches) concave or convex metal surfaces with glass coatings. The size and style of these early mirrors leads many archaelogists to believe that they were used as jewelry or amulets rather than for personal grooming.

There were several critical issues that posed a challenge to glass mirror production throughout the ages. The most important obstacles were in creating untinted and uncolored glass, making large panes that were uniformly thin and flat, and finding a way to apply molten metal to the glass without inducing thermal cracks and breakage. Techniques of plane glassblowing and silvering were so elusive that successful methods were not reliably developed until around the 12th century AD. Different metal alloys and glassblowing techniques were common throughout different periods, but in the 13th – 15th centuries a surge of technical development yielded a clearly superior process, rooted in Venice, Italy. By the mid 1200s, there were accounts of the thriving glass making community in Venice, and this place was the epicenter of mirror making for several hundred years.” [There is more commentary on mirrors in this online article].
[Source: https://www.brown.edu/Departments/Joukowsky_Institute/courses/13things/7306.html]