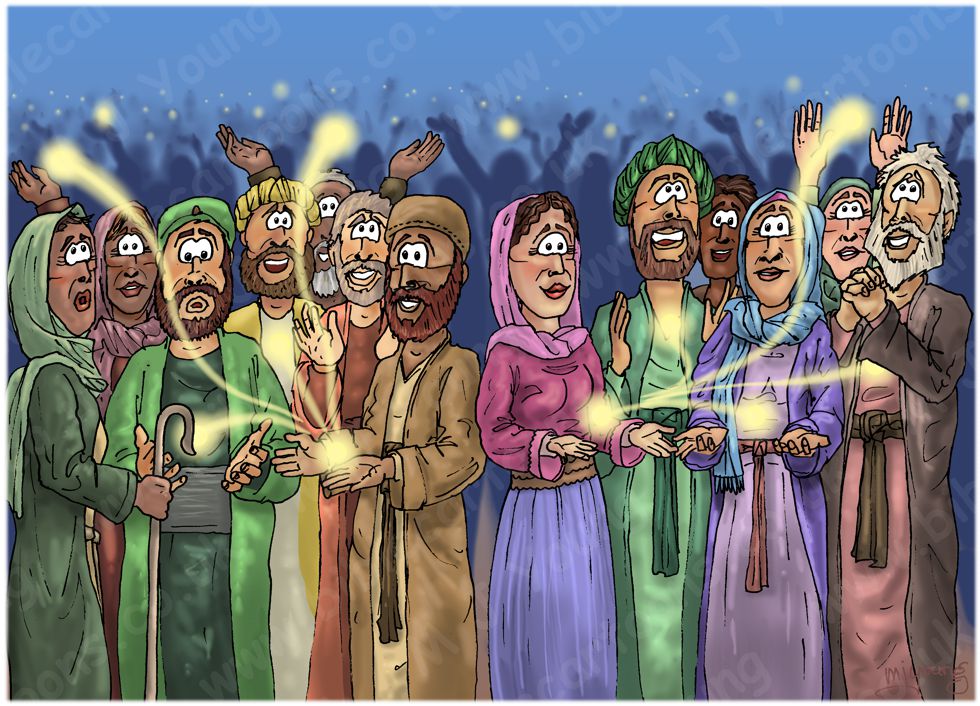 Matthew 13:23 (NLT)
23 [Jesus continue explaining his parable] “The seed that fell on good soil represents those who truly hear and understand God’s word and produce a harvest of thirty, sixty, or even a hundred times as much as had been planted!”

LIGHTING NOTES:
This scene is set outside, at night.
Many mysterious balls of light (see previous scenes) are shining brightly & illuminating the people in this scene.

RESEARCH/ADDITIONAL NOTES:
This is the final scene visually describing Jesus’ Parable of the Sower. In this picture he describes what happens to the faith-seed that falls on “good soil”. The two central figures (a man & a woman) are Christian believers, who are boldly sharing their faith with other people. As I explained in previous scenes in this parable, the mysterious little balls of light floating about are my way of visual representing a persons faith in God. The two central figures have little balls of light floating between their hands (which represents their faith), whilst other people are listening to them, choosing to believe in Jesus as well, and are receiving their own ball of light. The two central figures are sharing their faith, and so sparking belief in other people. To represent that sharing of the Gospel message, you can see their balls of light splitting up & coming to rest near other people. The “light trails” and new balls of light in other people’s hands represents their new Christian beliefs. In this way we see the culmination of Jesus’ words, “…those who truly hear and understand God’s word and produce a harvest of thirty, sixty, or even a hundred times as much as had been planted!”

Some believers are very good at sharing their faith, whilst for other people it is a much more private thing. For those who find it easy to talk about their faith, they can positively influence many people with their testimony (their story of how they came to believe in Jesus). Although it must be said that all Christians “tell their story”, with words, but also with their attitudes, and deeds as well.

When Jesus said “those who truly hear and understand God’s word and produce a harvest of thirty, sixty, or even a hundred times as much as had been planted!” I don’t think he was indicating an upper limit on the number of people a Christian can influence! Let’s face it, someone like Billy Graham (a well know US Christian evangelist) has talked to hundreds of thousands of people, and many of them have become believers, so our individual influence must never be limited by our own imaginations! God can and does use “ordinary Christians” (even quiet ones like me!) to spread his Gospel message around the world.