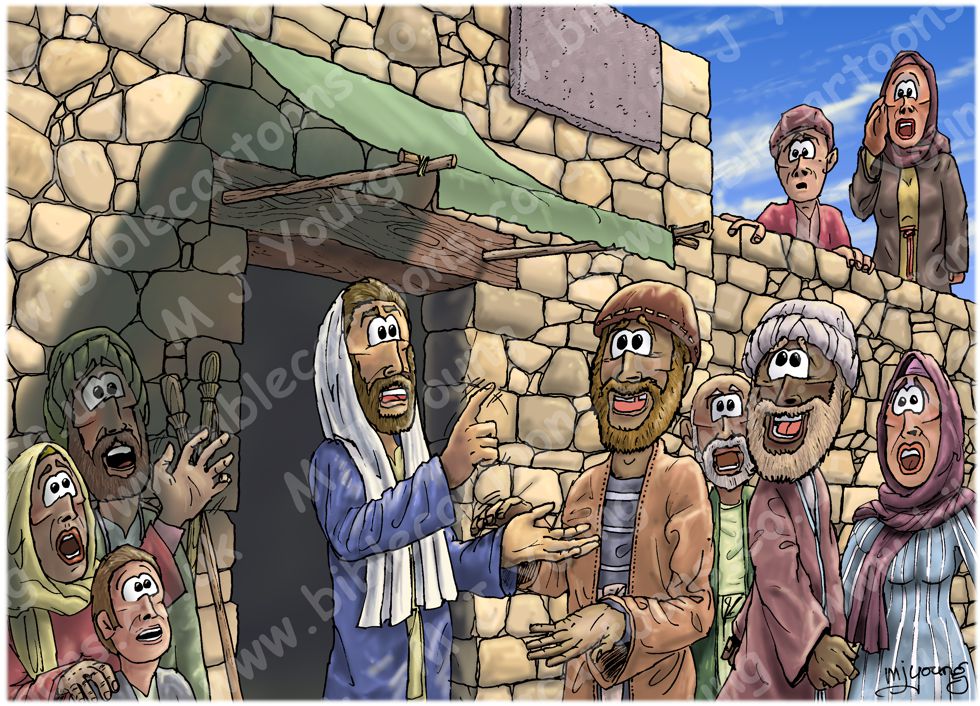 Matthew 9:30b (NLT)
[Then their [the 2 blind men] eyes were opened, and they could see!] Jesus sternly warned them, “Don’t tell anyone about this.”

CHARACTERS PRESENT:
from left to right: an unnamed family (husband, wife & little boy) near the doorway, Jesus, the 2 men who were previously blind, behind them is a bald, unnamed man. To the right is an unnamed woman in a striped dress. On the parapet of the house is a woman & her son.

RESEARCH/ADDITIONAL NOTES:
This scene is set just after Jesus has left the synagogue rulers house, having there resurrected his daughter from death (See Matthew 09:18-26). It is also the fourth in the series depicting Jesus’ healing of 2 blind men.

I enjoyed drawing all those astonished & amazed expressions on the various people’s faces! This is also one of the few occasions when I have drawn Jesus with a stern look on his face!

I’m pleased with the lighting effects in this scene; notably the door canopy shadow which falls across the people on the left. I like the way the woman’s upraised hand is in the sunlight & contrasting strongly with the shadows behind her.

If you’ve seen the other Bible Cartoons in this set (Scene 06-08) you will know that I have represented the two men’s blindness by drawing them with white eye pupils. Notice in this scene that their eye’s are black, like everyone else’s, showing that they can see clearly now.

Jesus is holding up a finger in this scene, which (together with his facial expression) is my way of showing that he is giving a stern warning to the two men he has just healed of blindness. One of the men (in a sandy, orange outer robe) is just about to place his hand on Jesus’ arm; I imagine he is trying to reassure Jesus of their good intentions! The other man (in plumb coloured outer robe & pale turban) is already starting to walk away. I imagine he is heading into town to see his family & friends. We know from the next verse (31) that instead of listening to Jesus the two men went & told everyone they could about their healing.

Here are some other Bible versions which give various interpretations of the “stern warning” text:

The Amplified Bible version, verse 30: And their eyes were opened. And Jesus earnestly and sternly charged them, See that you let no one know about this.

The King James version, verse 30: And their eyes were opened; and Jesus straightly charged them, saying, See that no man know it.

New Century Version, verse 30: Then the men were able to see. But Jesus warned them strongly, saying, “Don’t tell anyone about this.”
[Bold emphasis added – MY]

Why did Jesus became very stern with the 2 men he had just healed?
In the previous chapter (Matthew chapter 8, verse 4) we have the reason for Jesus’ stern words to the 2 men who he had just healed of blindness. The beginning of Matthew 8 details Jesus healing of a leprous man. After the healing the Bible narrative reads…

Matthew 8:4 (NLT)
4 Then Jesus said to him, “Don’t tell anyone about this. Instead, go to the priest and let him examine you. Take along the offering required in the law of Moses for those who have been healed of leprosy [1]. This will be a public testimony that you have been cleansed.”

Jesus often seems to have healed people’s ailments, but told them to present themselves to the priest (in the case of skin infections) rather than tell people about the healing. That was probably so that such a previously outcast person (a leper) could be welcomed back into society, once they had been vindicated as healed, by visiting the priest.

In the case of the two blind men Jesus healed, he might have told them not to tell people of their healing so that they might more fully dwell on their own healing, recognise the divine nature of their healer & also that they’re spiritual condition was thus improved into the bargain.

Jesus seems to have warned people not to tell of his healings, because that caused even more people to seek him out (”the crowds pressed in upon Him” – Mark 5:24 & Luke 8:45) and that hindered Jesus at His work. Although Jesus did indeed come to physically heal us, his primary reason was to declare the Good News & rescue us from eternal separation from God the Father upon our physical death. Ultimately that was fully & completely accomplished on the cross.

The Life Application New Testament Commentary, has this to say regarding the incident:

“Because these men believed, Jesus touched their eyes and suddenly they could see. The words because of your faith do not mean “in proportion to,” but “in response to.” This healing was a powerful example that Jesus was the Messiah. Healing of the blind had never occurred in the Old Testament or in Judaism before Jesus.

Jesus told the men not to tell anyone because he was concerned for his ministry. Jesus did not want to be known as just a miracle worker; he wanted people to listen to his words that would heal their broken spiritual lives. Jesus’ mission was to preach the Good News of the Kingdom of God. If crowds descended on him to see amazing healings and dead people raised, they would not be coming with the heart attitude needed to hear and respond to the gospel. Obviously the blind men would not be able to hide their healing for long. What, exactly, did Jesus expect? Jesus simply wanted these men to keep the details to themselves and think about them. He wanted them to worship quietly and treasure in their hearts what Jesus had done. He wanted them to focus on the spiritual aspect. Above all, he did not want more advertisement of his healing power. But the men could not contain themselves; they told everyone in that area what Jesus had done.”