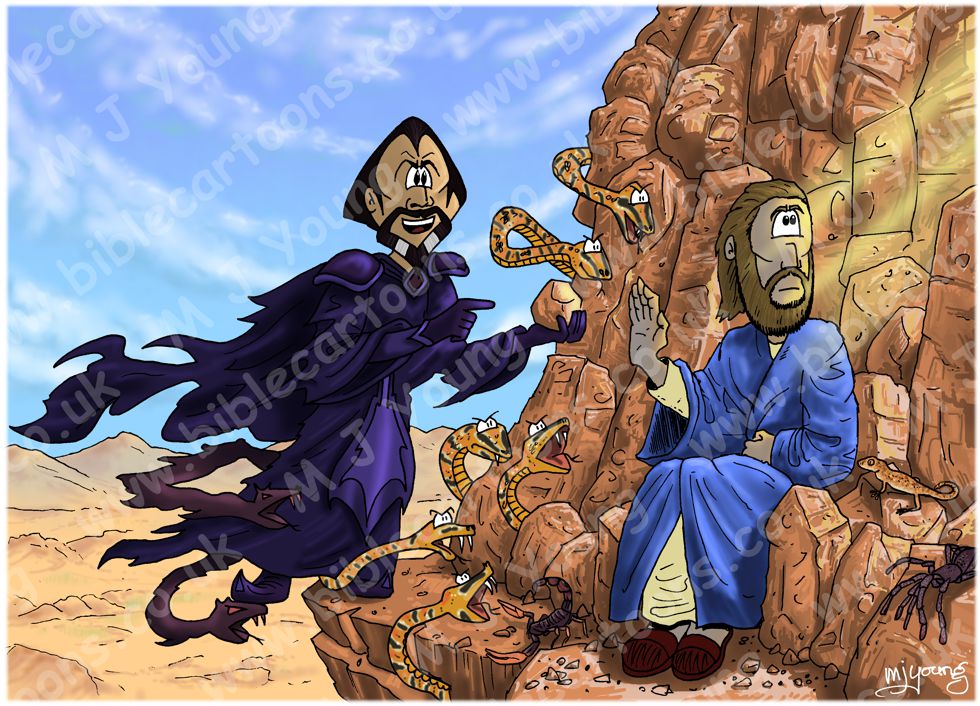 TIME OF DAY:
I have set this scene during the day, perhaps mid morning.

LIGHTING NOTES:
Sunlight illuminates this scene, coming from the right.

CHARACTERS PRESENT:
Jesus (seated) & Satan (or the Devil, standing to the left)

RESEARCH/ADDITIONAL NOTES:
This is the first cartoon illustration in which I have drawn a personified Satan character. In the past I have drawn sketches in which Satan is a dark, cloud-like figure, vaguely human in appearance. I had thought to keep Satan depicted in that way, since he doesn’t usually tempt humanity by appearing in a physical body at all. I wasn’t even certain that it would be right to draw him with a physical body. But in the end I thought it would make the picture more interesting & dynamic if we could clearly see him.

I have given the Devil the same skin colour as Jesus the Christ, since I reasoned that Satan would like to usurp Jesus & in some way would like to be Him.

Notice also that the Devil is standing on the edge of the cliff, & also in mid-air! He is referred to as the “Prince of the power of the air” (Ephesians 2:2 (New King James Version)) so I thought it appropriate to show him standing on thin air! Jesus is looking away & holding up his hand, clearly rejecting Satan’s temptation.

The natural snakes are Palestine Vipers or Palestinian Vipers (Vipera palaestinae) a dangerous, venomous snake found today in northern & central Israel. The 2 dark purple ones coming from Satan’s robes are manifestations of his evil & not real snakes at all.

The lizard near Jesus is a Lichtenstein’s Short-fingered Gecko (Stenodactylus sthenodactylus.)

The scorpion is one of the fattail or fat-tailed varieties (Androctonus crassicauda) which is apparently one of the most dangerous groups of scorpions species in the world.

What was this first temptation all about?
The first area of Jesus’ life put to the test related to the matter of His relationship with His heavenly Father; it was a test of His sonship. Satan tried to tempt Jesus to act independently of God the Father. Jesus did have the power to turn stones into bread, & he was very hungry, but doing so was not the will of the Father. In fact, the Father’s will for Jesus at this time was for Him to be hungry in the desert with no food. Therefore, to submit to Satan’s temptation (by satisfying His own physical hunger) would have been contrary to the Father’s will.

In order to counter the Devil’s temptation, Jesus quoted the Bible (specifically, Deuteronomy 8:3), which says that man does not live on bread alone, but by every Word that comes from God. In saying this, Jesus showed that it is better to obey God’s Word than to satisfy human desires.