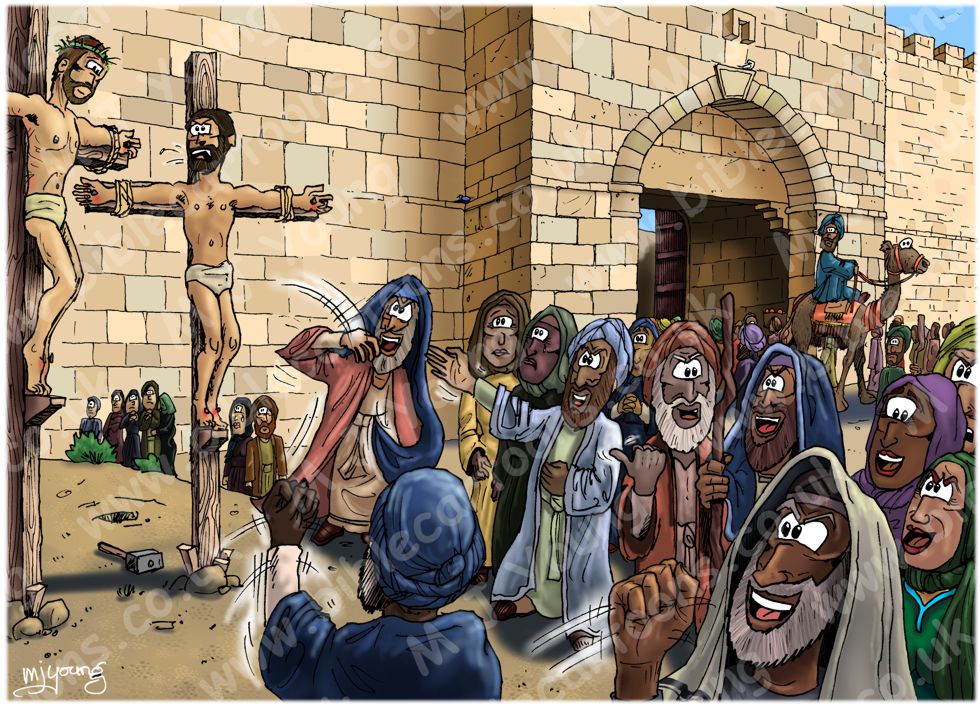 Mark 15:29-32 (NLT)
29 And the people passing by shouted abuse, shaking their heads in mockery. “Ha! Look at you now!” they yelled at him. “You can destroy the Temple and rebuild it in three days, can you? 30 Well then, save yourself and come down from the cross!”
31 The leading priests and teachers of religious law also mocked Jesus. “He saved others,” they scoffed, “but he can’t save himself! 32 Let this Messiah, this king of Israel, come down from the cross so we can see it and believe him!” Even the two criminals who were being crucified with Jesus ridiculed him.

LIGHTING NOTES:
The sun above illuminates the scene.

CHARACTERS PRESENT:
Jesus the Christ is hanging on the wooden cross to the left of the scene, with one of the criminals on the cross next to his. Notice that the man is hurling insults at Jesus, just like the crowd below them.

In the background, on the left, between the two crosses, you can see a small group of Jesus’ disciples. On the extreme left stands Andrew (Simon/Peter’s brother & one of the 12 disciples of Christ), the other people there are unspecified followers/disciples. To the right of the criminals cross, also in the background stands Mary Magdalene & John (son of Zebedee and brother of James.) Notice Mary Magdalene is crying.

In the foreground are various religious leaders, scribes, teachers of the law & various other Hebrew people. Most of them are jeering & gesturing at Jesus, but notice that there are three women (in the middle of the scene) who are looking sad, upset & crying. Not everyone would have delighted in the crucifixion & death of Jesus.

There is a blue bird, sitting on its nest in the corner of the stone work of the walls, in the centre of the picture.
There is a white bird sitting on the keystone of the arch of the gateway.

I have not shown the 4 man Roman crucifixion squad, or their Centurion leader, since I wanted the viewer to concentrate on the expressions of the crowd in this scene.

Notice the crowd going into & out of the gate in the wall of Jerusalem. There is a man in blue riding a camel, a man carrying a crate of oranges, & various others. I expect many people would have ignored the crucifixion of Jesus & gone about their every day business, oblivious of the amazing events unfolding in their time, after all, crucifixion may have been quite familiar to them.

This scene reminds me of any crowd that has turned ‘ugly’. You see this sort of thing at football matches & other sports events, where some terrible riotous explosion of human hatred suddenly erupts in the crowd. I suppose that can happen at any gathering of people. You see it in protest marches, political rallies & the like; the crowd is pursuing their peaceful goal, when suddenly it gets out of control, perhaps a rogue, destructive element sparks a fight, & all of a sudden everyone is caught up in the mayhem. There seems to be a ‘crowd mind’ at work, where individuals get caught up in the crowd & perhaps find themselves behaving in ways they wouldn’t dream of doing normally. People who throw bricks at the police in a riot may normally avoid such irrational, hate-fuelled behaviour. Maybe they are even surprised (& disgusted?) by their own behaviour when that ‘crowd mentality’ seems to take possession of them.
Perhaps that is what happened here, egged on by the religious leaders, many in the crowd who might otherwise have been neutral or even sympathetic to Jesus’ plight, suddenly turned on him & started hurling insults at him. After Jesus’ death, & once those people were quietly in their ‘normal’ frame of mind, I wonder if some of them felt guilty for their outbursts of hatred, their ‘going along with the crowd’?