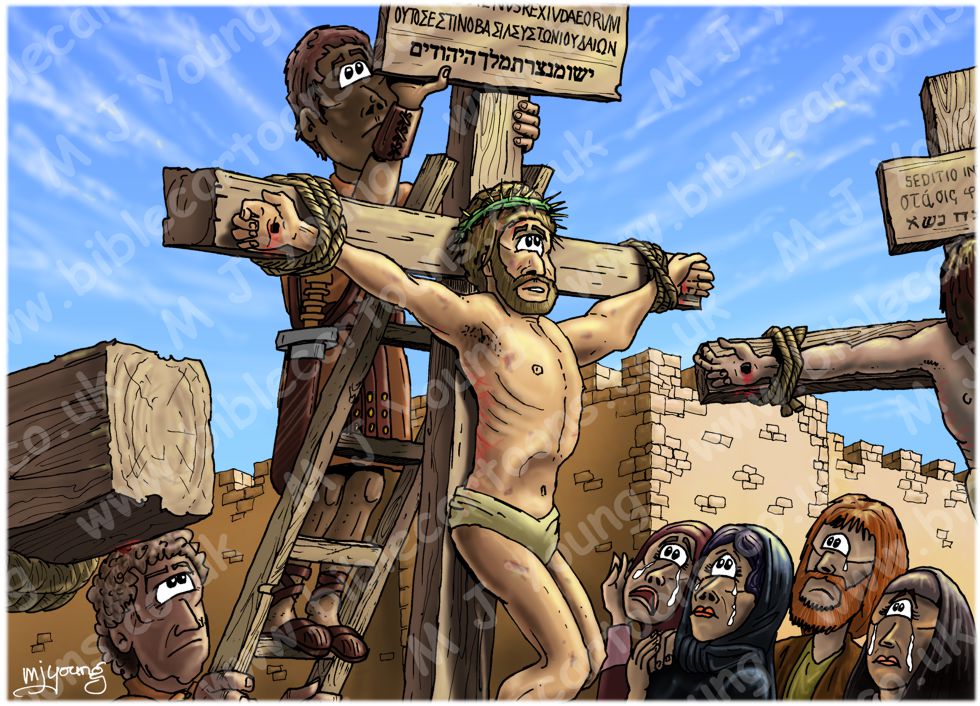 Mark 15:25-28 (NLT)
25 It was nine o’clock in the morning when the crucifixion took place. 26 A signboard was fastened to the cross above Jesus’ head, announcing the charge against him. It read: “The King of the Jews.”
27 Two criminals were crucified with him, their crosses on either side of his. [1]

[1]
Some manuscripts add verse 28, ‘And the scripture was fulfilled that said, “He was counted among those who were rebels”. see Isaiah 53:12.

LIGHTING NOTES:
Sunlight illuminates this scene, coming from the right.

CHARACTERS PRESENT:
Jesus in the centre, hung on the cross, with a Roman soldier hanging the sign board above his head. Another Roman soldier holding the ladder. We can see 1 of the 2 criminals with head bowed.
We can only see the back & end of the cross beam & the rope tying the 2nd criminals arm to his cross, on the left of the picture.

At the bottom right of the scene, from left to right are: Mary (wife of Cleopas), Mary Magdalene, John (son of Zebedee, the disciple whom Jesus loved) & Mary (the mother of Jesus).

Like some of the previous scenes, this was quite a harrowing cartoon illustration to draw & colour, showing Jesus having been nailed to the wooden cross by the Roman soldiers. You can see the whip marks on his back, from the flogging he received previously. Remember that the flogging a prisoner received greatly weakened him, in preparation for crucifixion, which is the cruelest form of capital punishment ever devised.

A note about the inscription above Jesus’ head
It was customary for criminals to have their crimes written onto a sign board & placed above their heads on the cross, so that the crowd below could read it.

The exact wording of the inscription is a little unclear. Mark’s gospel (see above) states ‘It read: “The King of the Jews.“’, whilst John’s Gospel states, John 19:19 (NLT) ‘And Pilate posted a sign over him that read, “Jesus of Nazareth, the King of the Jews.”’ The next verse in John states, ‘The place where Jesus was crucified was near the city, and the sign was written in Hebrew, Latin, and Greek, so that many people could read it.’

We know from the above that the sign was written in 3 languages & it is possible that the Latin was written first – that being the official language of Rome. It’s possible that the Greek words followed (that being the universal language of the whole Mediterranean area at that time), with the Hebrew text written below that. It would make sense for Pilate to use all three languages on the sign, as there would have been many foreign visitors in Jerusalem at that time for the Feast of the Passover.

For these reasons I have shown the inscription written in Latin, with Greek below that, & Hebrew below that in my cartoon illustration.

We know that the Jewish leaders objected to Pilate’s sign board, because the next verse in John states, ‘Then the leading priests objected and said to Pilate, “Change it from ‘The King of the Jews’ to ‘He said, I am King of the Jews.’” Pilate replied, “No, what I have written, I have written.” (John 19:21-22 (NLT))
We might assume that Pilate was trying to deliberately insult the Jewish leaders by writing that!

What might the inscription above Jesus head have read?
The Latin for “Jesus of Nazareth, King of the Jews” is ‘IESVS·NAZARENVS·REX·IVDÆORVM’ (Jesus Nazarenus, Rex Iudaeorum) where the letter “I” represented the Letter “J” (both in Jesus and Jews), & the letter “V” represented a “U”. Latin for King was “REX”.

What does the 2nd inscription at the right of the picture say?
We don’t know exactly what the crimes were of the 2 criminals who were crucified beside Jesus.

I have decided to refer to them as Insurrectionists & murderers.
The Latin for Insurrectionists is “seditio” (from which we get the word sedition) & Murderer is “interficio interfeci interfectum”.
Below that are the Greek words for these crimes, στάσιҁ (Stasis) Φόνος (Phonos)
Below that are the Hebrew words for these crimes, נשא (nes-ä’), רצח (rä-tsakh’)

It was very interesting to discover what these words were in the 3 different languages. I can’t guarantee that i have them correctly, as each word has multiple meanings in each language!