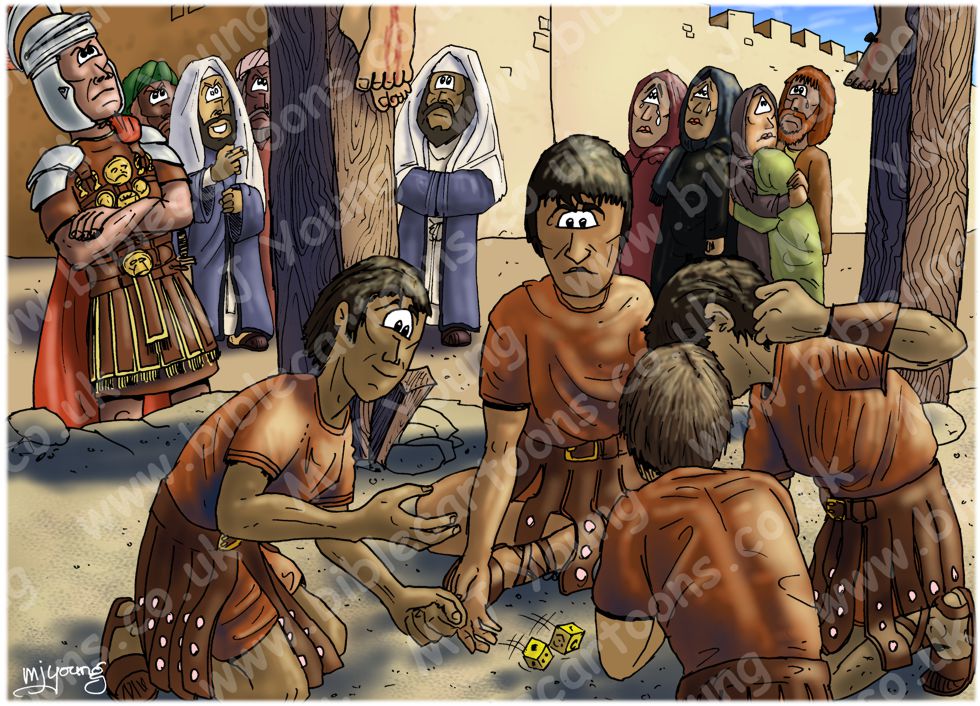 Mark 15:24b (NLT)
24b [Then they nailed him to the cross.] They gambled for his clothes, throwing dice to decide who would get them.

TIME OF DAY:
Mark 15:28 states that the crucifixion of Jesus took place at 9am.

LIGHTING NOTES:
The sun is already high in the sky & shining down on the scene from the rigth. The sun is casting deep, blue shadows off to the left.

CHARACTERS PRESENT:
Only the feet of Jesus, on the cross are visible at the top of the scene.
The Roman Centurion can be seen to the left of the cross, looking up at Jesus.
There are four Roman soldiers in the foreground, throwing dice. These are the same figures from the previous scene (Mark 15 – The Crucifixion – Scene 07 – Nailed to the cross.)
You can see four Hebrew figures behind the Centurion, two are Pharisees (in Blue robes with pale shawls over their heads) & two unidentified onlookers.
The group of four figures in the right background are the same ones as in the next scene (Mark 15 – The Crucifixion – Scene 09 – Sign board (close up)), namely (from left to right): Mary (the wife of Cleopas), Mary Magdalene, Mary (the mother of Jesus, comforting a girl in green) & John (son of Zebedee, the disciple whom Jesus loved.)

All four gospels relate the soldiers gambling (casting lots, or using dice) for Jesus clothes. many commentators have seen this as a fulfilment of the prophesy written in Psalms of this event:
Psalms 22:18 (ANIV)
‘They divide my garments among them and cast lots for my clothing.’

Apparently, during an execution, a victim’s personal belongings became the property of the Roman execution squad. In this particular case the four-man squad (see John 19:23) cast lots for His clothes; an inner and outer garment, a belt, sandals, and perhaps a head covering. casting lots could have been done using dice, as I have illustrated in this scene.