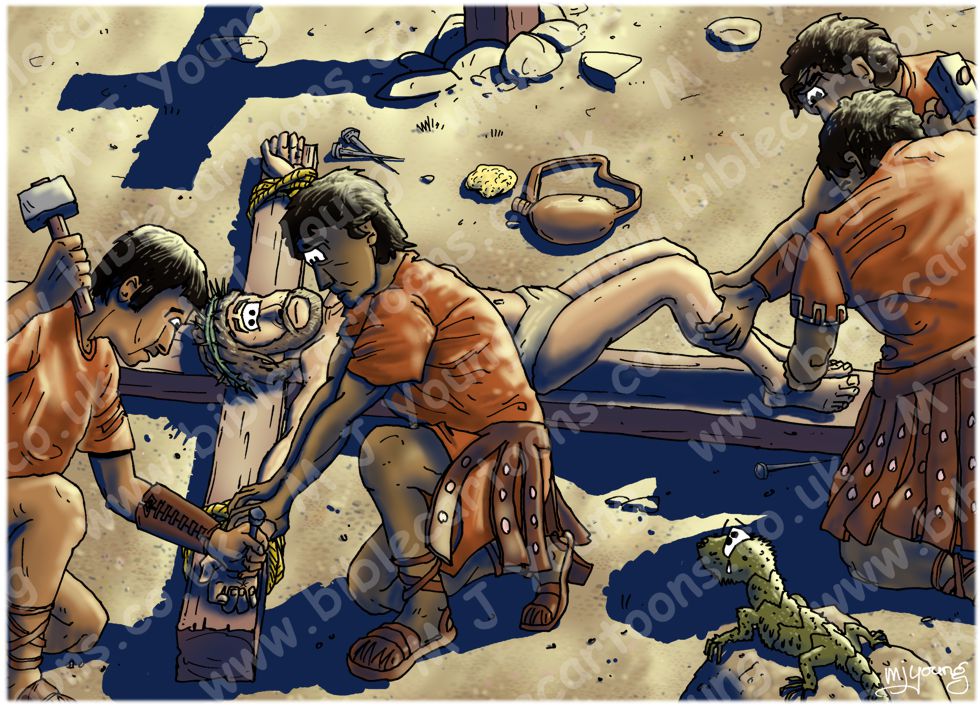 Mark 15:22-24a (NLT)
22 And they brought Jesus to a place called Golgotha (which means Skull Hill). 23 They offered him wine drugged with myrrh, but he refused it. 24a Then they nailed him to the cross [They gambled for his clothes, throwing dice to decide who would get them.]

TIME OF DAY:
Mark 15:28 states that the crucifixion of Jesus took place at 9am.

LIGHTING NOTES:
The sun is already high in the sky & shining down on the body of Jesus, who is lying on the wooden cross. The sun is casting deep, blue shadows.

CHARACTERS PRESENT:
Jesus, on the cross. Roman soldiers in tunics & leather armour.
There is a Gecko (lizard) on a rock in the foreground.

The colouring for this scene is very much taken from Scene 04 – Led away, in this Mark 15 – The Crucifixion series. I have used the same deep blue shadows & bright yellow/white sunlight coloyurs from that scene.

Jesus is looking directly at the viewer.

Notice the wineskin mentioned in the above text, whilst we know from verse 36 that a sponge was used to offer sour wine to Jesus on the cross, later in the day.

I wanted to add an animal, for interest, so have included a lizard. It is a Gecko (Cyrtodactylus kotschyi orientalis) which my reserach informed me can be found in & around the Holy Land.

‘Wine drugged with myrrh was offered to Jesus to help reduce his pain. Myrrh is generally understood to be a narcotic that was used to deaden pain. Tradition says women of Jerusalem prepared and offered this drink to condemned men. This also may allude to Psalm 69:21. But Jesus refused to drink it. He chose to suffer fully conscious and with a clear mind.’ (Source: Life Application New Testament Commentary.) 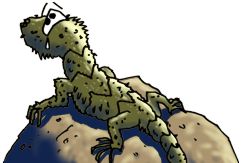