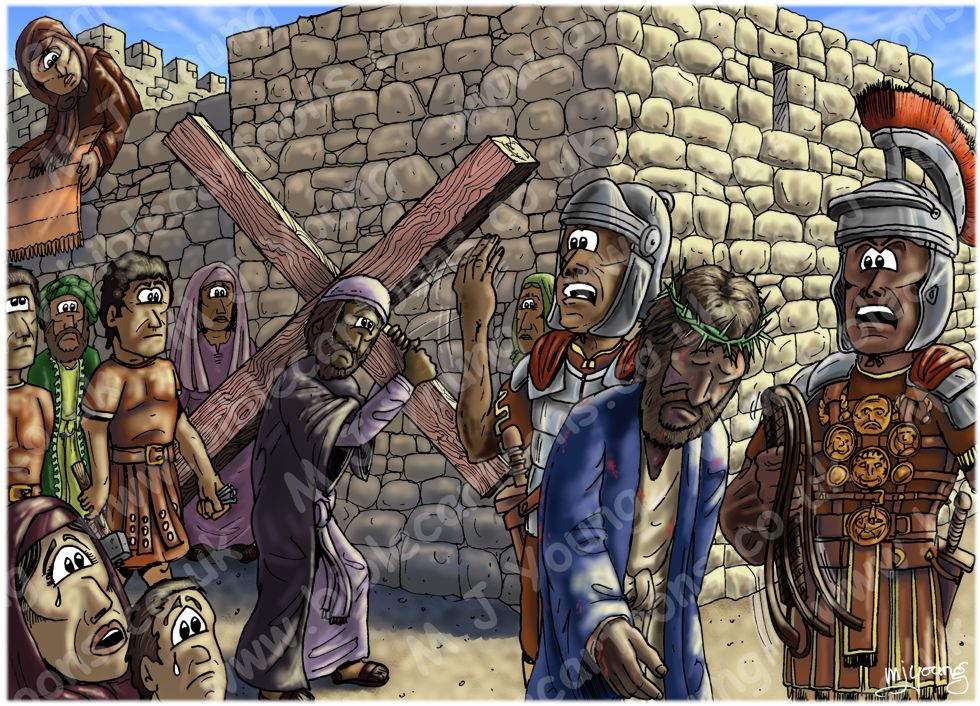 Mark 15:21 (NLT)
21 A man named Simon, who was from Cyrene, was coming in from the country just then, and they forced him to carry Jesus’ cross. (Simon is the father of Alexander and Rufus.)

TIME OF DAY:
Mark 15:28 states that the crucifixion of Jesus took place at 9am, therefore, this scene is set a little before that time.

LIGHTING NOTES:
The sun is already climbing into the sky from the east (right) & shining strong yellow/white light down onto the scene .

CHARACTERS PRESENT:
Jesus, looking down at the right of the scene, wearing blue.
To the right of Jesus is a Roman soldier, beckoning the figures to hurry us. To the extreme right is a Roman Centurion.
Simon of Cyrene is carrying the cross. Behind him are two Roman soldiers in leather tunics – part of the execution squad.
There are various Hebrew people making up the crowd of onlookers.

This scene was completed nearly a year after Scene’s 05 – Led away & 07 – nailed to the cross. That being the case, I have used the colour scheme’s from these previous cartoon illustrations in this one, so that they share a common style & lighting scheme, when viewed together.

We know from the scriptures that there was a Roman Centurion in charge of the execution of Jesus (see Matt 27:54, Mark 15:39, Luke 23:47.) A Centurion was a leader of a company of (approximately) one hundred Roman soldiers. Although I have shown this Centurion with his phalerae in place (the gold, silver, or bronze sculpted disks worn on the breastplate, something like medals or badges of honour) it is doubtful he would have worn it to an execution, since the phalerae was normally only worn during parades. However, for my purposes, it helps to identify this as the Centurion in charge of the execution squad.

In the next cartoon illustration (scene 07 – Nailed to the cross) I didn’t show the Centurion, nor any soldiers in metal armour. My reasoning is that the men nailing Jesus to the cross might have found it difficult to move in such armour, so leather & fabric tunics would have been more appropriate for the execution squad itself.

In this scene (Scene 06 – Simon of Cyrene), two of the Roman’s we can see in this picture, following Simon carrying the cross are part of the execution squad itself. You can see one of the men carrying a hammer & the nails used in crucifying Jesus to the cross.

I decided not to show any of the Hebrew people smiling, or showing pleasure at the imminent execution of Jesus. I suspect that it was only the Hebrew leaders (members of the Sanhedrin (the supreme Jewish Court of Justice in Jerusalem) who would have been satisfied at the prospect of Jesus’ death. Based on the scriptures it seems clear that the common populace of Israel generally held Jesus in high esteem. If that is so, then they certainly wouldn’t have been pleased to see him going to his own execution.*

In fact, the left foreground couple (a mother & her young son) are openly weeping for Jesus.

Who was Simon of Cyrene?
We know from Matthew’s Gospel that he was the “father of Alexander and Rufus” (see Mark 15:21). It is possible that this Simon was one of the “men of Cyrene” who preached “the Word” (the new Gospel of Jesus, after his death, resurrection & ascension into heaven) to the Greeks (see Acts 11:20). If that is true, then his brief encounter with Jesus must have had a lasting effect on him. Perhaps he spoke to Jesus’ followers later, & found out more about the life & teachings of Jesus the Christ, & so became one of the early Christians?

In any case we know that Simon was seized by the Roman soldiers as the execution procession walked towards the city walls, & out to Golgotha. It is probable that Jesus’ strength was giving out, after the flogging & abuse he had already suffered, & so the heavy cross which Jesus had been carrying became too heavy for him to bear on his shoulders. Perhaps the Roman’s seized Simon of Cyrene because he showed sympathy with Jesus, or perhaps he was simply pressed into the task against his will?

Where was Cyrene?
Cyrene was an important city originally founded by the Greeks. It was the capital of the district of Cyrenaica in Africa, in the country now called Libya. It was a Greek city but a hundred thousand Jews from Palestine had been settled in this province by Ptolemy Soter (B.C. 323-285.) By the time of Jesus that number would have greatly increased. Cyrenian Jews had a synagogue at Jerusalem (see Acts 6:9), to which many of them came as pilgrims during the various annual festivals. As such there were probably many Cyrenian Jews coming into Jerusalem at the time of Jesus’ crucifixion.

* Scriptural evidence for the high regard of Jesus amongst the population of Israel.
There are many references in the Gospels which suggest that the general populace held Jesus in high regard, & were fascinated with his ideas & teachings. Here are a few (italicised for emphasis):

1) Matthew 7:28-29 (ANIV) ‘When Jesus had finished saying these things [the Sermon on the Mount (see also Luke 6:20-49)], the crowds were amazed at his teaching, because he taught as one who had authority, and not as their teachers of the law. ’

2) Mark 1:21-22 (ANIV) ‘They [Jesus & his first disciples] went to Capernaum, and when the Sabbath came, Jesus went into the synagogue and began to teach. The people were amazed at his teaching, because he taught them as one who had authority, not as the teachers of the law. ’

From these 2 scriptures alone it is possible to surmise that the chief priests & teachers of the law were probably envious of Jesus’ popularity with the Hebrew people. In fact, Pontius Pilate arrived at the same conclusion – Mark 15:10 (ANIV) ‘…knowing it was out of envy that the chief priests had handed Jesus over to him.’

3) When questioned about paying taxes… Mark 12:17 (ANIV) ‘Then Jesus said to them, “Give to Caesar what is Caesar’s and to God what is God’s.” And they were amazed at him.’

5) Luke 5:26 (NKJV) ‘And they were all amazed, and they glorified God and were filled with fear, saying, “We have seen strange things today!” ‘

Even though the crowds of people who heard Jesus’ teachings, or saw his many miracles, were amazed by him, Jesus himself knew that he must be given over to execution on the cross:
Luke 9:43-44 (NKJV) ‘And they were all amazed at the majesty of God. But while everyone marvelled at all the things which Jesus did, He said to His disciples, “Let these words sink down into your ears, for the Son of Man is about to be betrayed into the hands of men.“’

It was, of course, the death, resurrection & ascension of Jesus which enabled us all to be saved from our own sins (wrong-doing) & to gain eternal life in their place. Jesus’ sacrifice enabled Christianity to begin & for everyone on the planet to gain access to God in Heaven.