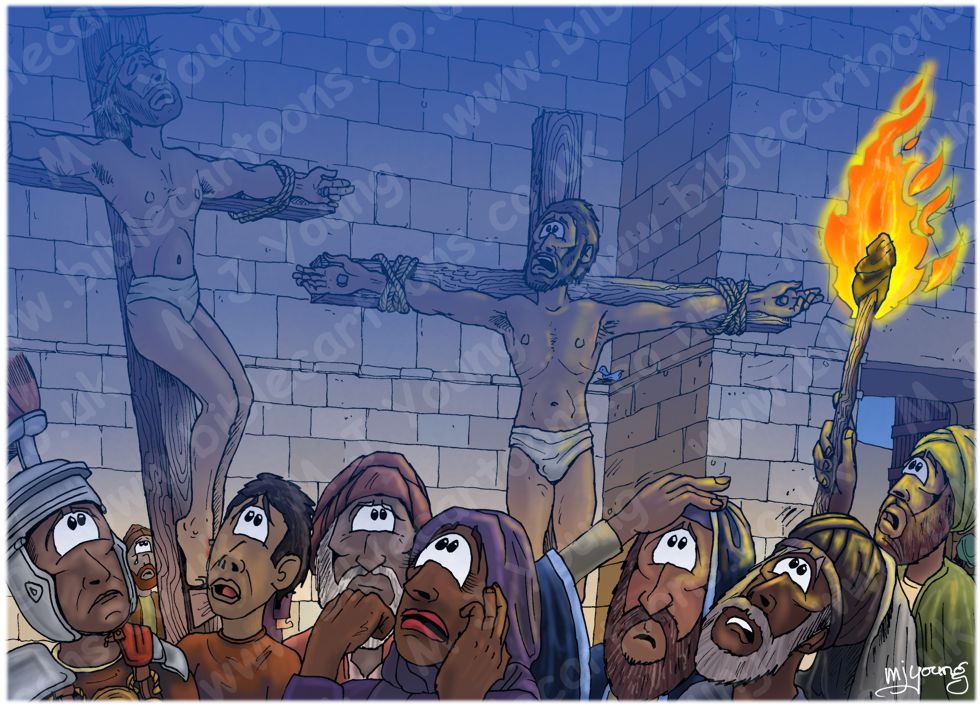 Mark 15:33-37 (NLT)
33 At noon, darkness fell across the whole land until three o’clock. 34 Then, at that time Jesus called out with a loud voice, “Eloi, Eloi, lema sabachthani?” which means, “My God, my God, why have you forsaken me?”
35 Some of the bystanders misunderstood and thought he was calling for the prophet Elijah. 36 One of them ran and filled a sponge with sour wine, holding it up to him on a stick so he could drink. “Leave him alone. Let’s see whether Elijah will come and take him down!” he said.
37 Then Jesus uttered another loud cry and breathed his last.

LIGHTING NOTES:
Although there is sunlight above the scene, the descending darkness is making that rather feeble.
The flaming torch, held aloft by the man in green on the right of the scene provides additional light, with a yellow- orange tinge.

CHARACTERS PRESENT:
Jesus the Christ is hanging on the wooden cross to the left of the scene, with one of the criminals on the cross next to his. Notice that this man, who was joining in with the crowd & hurling insults at Jesus in the previous scene, has an expression of fear & awe on his face now.

In the foreground, on the left we can also see the Roman Centurion (in the red plumed helmet) & one of the crucifixion soldiers. There are also various religious leaders, scribes, teachers of the law & various other Hebrew people from the previous scene. Most of them are looking unnerved & worried by the unexpected darkness.

In the background, between the cross of Jesus & the Centurion you can see John (son of Zebedee and brother of James), looking up at Jesus with a tear in his eye. You can just make out Mary Magdalene’s arm & hand to the right of the cross.

Notice that the blue bird can still be seen, sitting on its nest in the corner of the stone work of the walls, to the right of the criminal.

I have drawn the figures closer to the viewer than in the previous scene, so as to concentrate on the expressions on the people’s faces in this scene.

With the addition of the dark blue vignette over the scene, I thought it might all look a bit too blue & dark, so I have added a yellow/orange torch, to add light to the scene. The highlights from the torch can be seen on the edges of the foreground figures & the criminal on the cross in the centre of the scene.

The descending darkness is beginning to hide Jesus face & features during the final hours of the crucifixion. It has been suggested that the darkness prevented people from seeing all the world’s illnesses, ailments & sin being heaped upon the body of our Lord Jesus at this time.