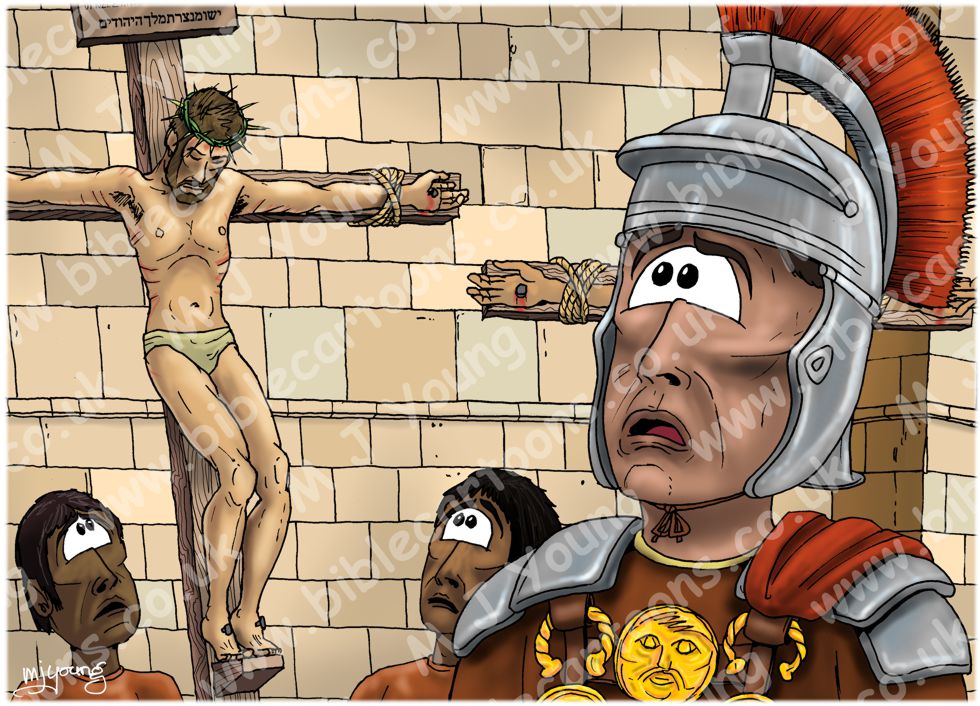 TIME OF DAY:
Mark 15:33 informs us that Jesus died, ‘at the ninth hour’, which in Hebrew time keeping is 3 o’clock in the afternoon.

LIGHTING NOTES:
The sun, overhead & to the right illuminates this scene.

CHARACTERS PRESENT:
Jesus the Christ, dead upon the cross.
A Roman Centurion, who was a leader of 100 Roman soldiers. Two of the four man Roman crucifixion squad.
Notice we can see one of the other crucified men behind the Centurion’s head in this scene.

The colour variations in the stone walls of Jerusalem in the background are taken from previous scenes I’ve drawn in this story sequence. I have used the skin, hair, uniform, shading & highlight tones & hues established in the previous “Simon of Cyrene” illustration for the figures in this scene, to maintain a unified colour throughout the sequence.

Note, I have made Jesus’ skin tones paler, since his body has died in this scene.

I wanted to focus attention on the facial expression of the Centurion, so have made his face & upper body quite dominant in the scene. Mirroring his own expression (awe, shock, surprise, curiosity, recognition?) I have two of the 4-man execution or crucifixion squad in the scene, with similar expressions on their faces. From the text we know that something caught the Centurion’s attention: something different, surprising, or amazing, about the way Jesus died upon the cross, such that he exclaimed, “Truly, this was the Son of God!”

The Bible Knowledge Commentary makes an interesting point about what the Centurion said:
‘The Roman officer probably did not use the phrase “the Son of God” in its distinctive Christian sense, as a reference to Jesus’ deity (cf. Luke 23:47). Because of his pagan background he probably viewed Jesus as an extraordinary “divine man” much like the Roman emperor who was acclaimed “son of God” (cf. comments on Mark 12:16). Consequently some interpreters translate the phrase with an indefinite article, “a son of God” (niv marg.). However, Mark regarded the declaration in its distinctive Christian sense; the centurion unwittingly said more than he knew.’

Perhaps it was the confident way that Jesus committed his soul to his Father in heaven, & the way he addressed God as his Father, whilst agonised upon the cross, which so affected the Roman Centurion. Undoubtedly this man had heard all sorts of confessions, pleadings, utterings & ravings from the various people he had seen crucified. But it seems that Jesus’ cries & the manner of his death was unique, & “spoke” deeply into this Centurion’s heart. There such a marked contrast between other people’s utterances & Jesus’ speech, that, coupled with the darkening skies, this man concluded that Jesus was indeed divine.

The Commentary goes on to say:
‘The centurion’s confession is the climax of Mark’s revelation of Jesus’ identity (cf. comments on 1:1; 8:29-30). This confession by a Gentile Roman officer contrasts with the mocking response of those mentioned in 15:29-32, 35-36. This Gentile’s confession also exemplifies the truth of the torn curtain.’
(Source: The Bible Knowledge Commentary: An Exposition of the Scriptures by Dallas Seminary Faculty.)

Essentially then, the torn curtain & the exclamation of this pagan Roman Centurion point to the same thing: that here was Jesus who had just died on the cross, & that he was indeed the Son of God.

It is interesting to note that this Roman Centurion was the first person recorded as recognising Jesus’ divinity after He had died. Before the disciples, before Mary Magdalene, before anybody else, this pagan man, this Centurion, uttered the truth & is immortalised in the Bible as being the very first person to correctly identify Jesus’ true identity after his death.