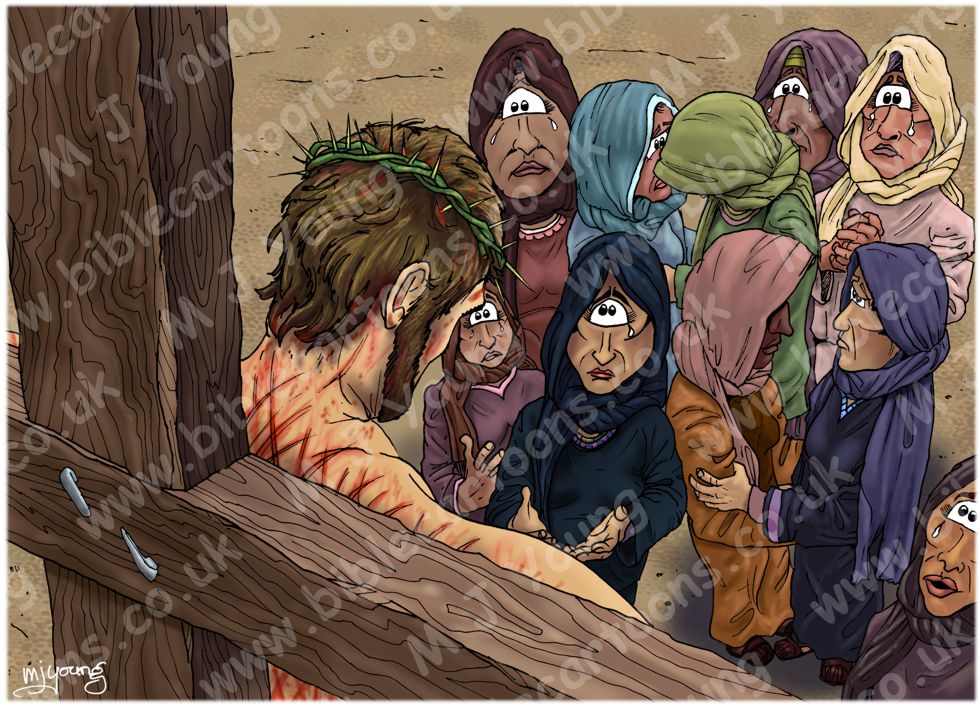 Mark 15:40-41 (NLT)
40 Some women were there, watching from a distance, including Mary Magdalene, Mary (the mother of James the younger and of Joseph), and Salome. 41 They had been followers of Jesus and had cared for him while he was in Galilee. Then they and many other women had come with him to Jerusalem.

TIME OF DAY:
Mark 15:33 informs us that Jesus died, ‘at the ninth hour’, which in Hebrew time keeping is 3 o’clock in the afternoon. So this scene is set also at that time.

LIGHTING NOTES:
The sun, overhead & to the right illuminates this scene.

CHARACTERS PRESENT:
In the foreground we can see Jesus’ body upon the cross.
In front of him are the various women mentioned in the above Bible verses. Notice that some are looking up at Jesus, some are comforting each other, all looked sad & tearful. In Mark’s gospel, only three of the women are named: Mary Magdalene, Mary (the mother of James the younger and of Joseph), and Salome. I have positioned Mary Magdalene (in dark clothes) right at the foot of the cross, looking up at him with tears in her eyes.
By comparing Mark 15:40 with Matthew 27:56 it seems clear that Salome was the wife of Zebedee & the mother of James & John, 2 of Jesus’ closest disciples. Mary (the wife of James/Cleopas (son of Alphaeus) and the mother of James the younger and of Joseph, and sister of mary (the mother of Jesus)) is the woman on the top left of the scene in dark head scarf.
I have decided to include Mary the mother of Jesus in this scene as well, even though she is not specifically named in the verses above. She is the figure to the extreme bottom right corner of the scene.

Although the passage above reads, ‘Some women were there, watching from a distance…’ I have decided to alter the perspective & have the women positioned much closer at the foot of the cross in order to bring the elements of this scene closer together. Notice also that I have raised the point of view above the cross, so we are looking down, over the shoulder of Jesus’ body to the women gathered below. This has the effect of foreshortening the figures of the women.