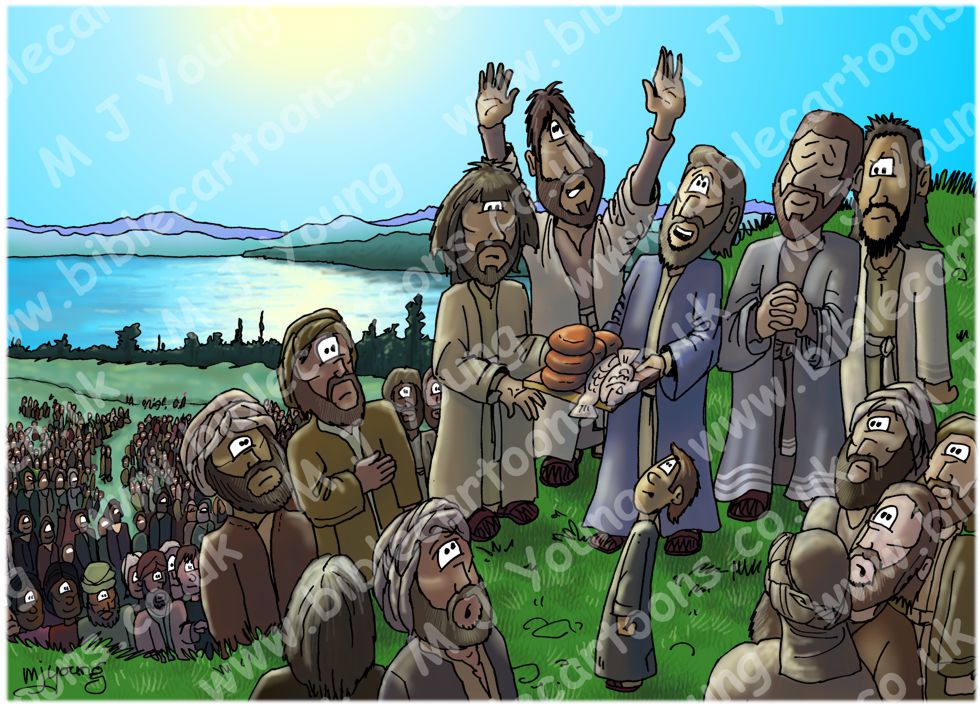 Mark 6:30-44 (NLT)
30 The apostles returned to Jesus from their ministry tour and told him all they had done and what they had taught. 31 Then Jesus said, “Let’s get away from the crowds for a while and rest.” There were so many people coming and going that Jesus and his apostles didn’t even have time to eat. 32 They left by boat for a quieter spot. 33 But many people saw them leaving, and people from many towns ran ahead along the shore and met them as they landed. 34 A vast crowd was there as he stepped from the boat, and he had compassion on them because they were like sheep without a shepherd. So he taught them many things.
35 Late in the afternoon his disciples came to him and said, “This is a desolate place, and it is getting late. 36 Send the crowds away so they can go to the nearby farms and villages and buy themselves some food.”
37 But Jesus said, “You feed them.”
“With what?” they asked. “It would take a small fortune [1] to buy food for all this crowd!”
38 “How much food do you have?” he asked. “Go and find out.”
They came back and reported, “We have five loaves of bread and two fish.” 39 Then Jesus told the crowd to sit down in groups on the green grass. 40 So they sat in groups of fifty or a hundred.
41 Jesus took the five loaves and two fish, looked up toward heaven, and asked God’s blessing on the food. Breaking the loaves into pieces, he kept giving the bread and fish to the disciples to give to the people. 42 They all ate as much as they wanted, 43 and they picked up twelve baskets of leftover bread and fish. 44 Five thousand men had eaten from those five loaves!

TIME OF DAY:
Verse 35 tells us that the crowds were in a desolate place & the hour was getting late. Therefore I have made it late afternoon.

LIGHTING NOTES:
The sun is above the lake in the distance & behind the crowd & thus casts shadows across many of the figures in the scene.

CHARACTERS PRESENT:
Jesus (standing with the loaves & fish) with the boy who donated them before him. Jesus’ disciples are nearby, although you can only see 4 of them: Simon/Peter & James/Cleopas (son of Alphaeus) (on the left of Jesus) & Andrew & Thomas/Didymus on the right. There are various other, unnamed people from the crowd of 5,000.

This story appears in several of the gospels: Matthew 14:13-21; Mark 6:30-44; Luke 9:10-17. In all of these (the synoptic gospels) there appears to be no mention of a small boy who gives Jesus his food! However, I decided to run with the common interpretation that it was a boy who provided the loaves & fish. He stands before Jesus, in my cartoon.

It is not entierly certain where this scene took place. The scriptures tell us (Mark 6:7) that Jesus had sent his 12 disciples out, in pairs. Now they came back & reported to Jesus what had happened. Because of all he people coming & going, Jesus suggested that he & the 12 leave by boat for a quieter spot (Mark 6:32) – called, in other translations, a desolate place, a solitary place, a remote place. It is thought that the place was on the lake shore, near the Bethsaida Julias, a city across the Jordan River on the northeast side of the Sea of Galilee. This place is about 2.5 miles (4 km) north East of Capernaum.
I found a lovely photoraph pinned to a Google Earth position (see co-ordinates above) which is a bit further south. The photo inspired me when it came to drawing & colouring the lake & background mountain view of my cartoon.

My Bible Background Commentary points out that Mark 6:39 (NLT) “ Then Jesus told the crowd to sit down in groups on the green grass.” informs us that the time of year was spring (when the grass is green) & possibly near the time of the Passover celebration.