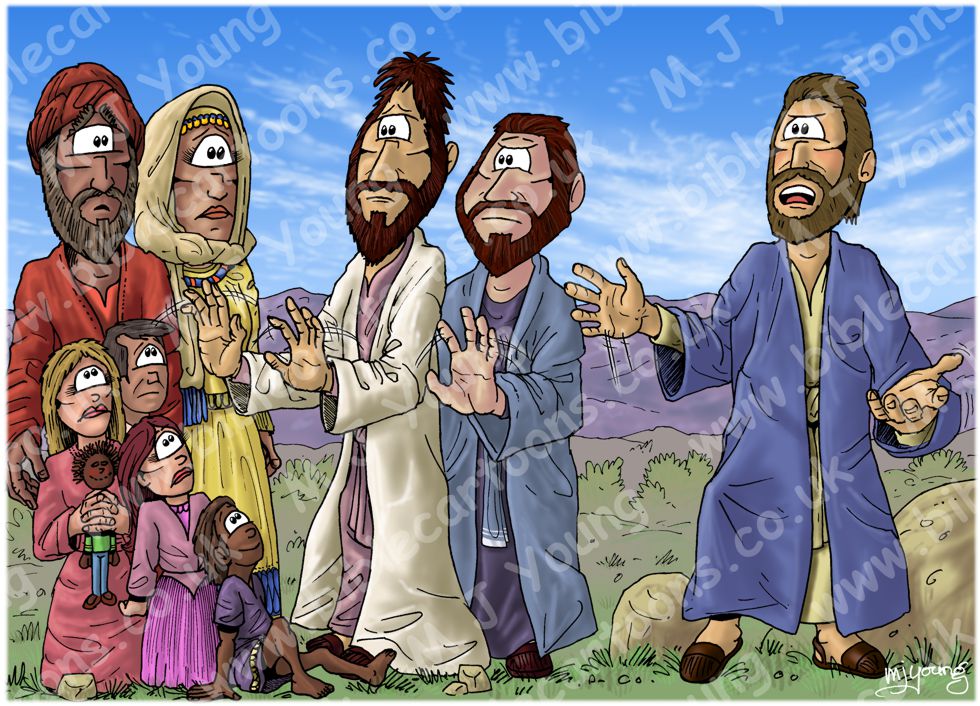 Mark 10:13-15 (NLT)
13 One day some parents brought their children to Jesus so he could touch and bless them. But the disciples scolded the parents for bothering him.
14 When Jesus saw what was happening, he was angry with his disciples. He said to them, “Let the children come to me. Don’t stop them! For the Kingdom of God belongs to those who are like these children. 15 I tell you the truth, anyone who doesn’t receive the Kingdom of God like a child will never enter it.”

LIGHTING NOTES:
The sun lights this scene from the left.

CHARACTERS PRESENT:
In this first scene we can see Simon/Peter & his brother Andrew standing on the left, holding hands up to parents & children, barring their way (access) to Jesus. I have only drawn 2 of Jesus’ disciples in this scene, no doubt they would all have been there at the time. There are several adults & children, on the left of the scene, representing all the people who wanted to meet with Jesus.
Jesus is standing in this scene, looking cross & beginning to gesture to his disciples that they should allow the children to come to him.

RESEARCH/ADDITIONAL NOTES:
The colouring & characters in this scene are based on the ones in scene 02, which was actually drawn & coloured up first!

I expect the disciples thought they were doing the right thing; perhaps they could see that Jesus was physically tired & they thought they would stop parents & children from coming to Jesus, thereby giving him some rest. Their motives may have been well-meaning, but Jesus clearly was indignant that they had decided to prevent the people (especially the children) from getting to him.

Where the New Living Translation of the Bible (see above) states that Jesus was ‘angry’, other translations of the Bible use the words, ‘indignant’, ‘pained’, ‘greatly displeased’, ‘irritated’. Clearly Jesus didn’t want his disciples in any way stopping the children from coming to see him & being blessed by him. Indeed, Jesus said that anyone wanting to come into God’s Kingdom must come as a little child; with a little child’s attitude of simple belief.

As The Bible Knowledge Commentary points out, there was a duoble rebuke there for Jesus disciples:
‘Jesus… was indignant (cf. v. 41) at the disciples’ interference (cf. 9:38). This verb of strong emotional reaction is unique to Mark who highlighted Jesus’ emotions more than the other Gospel writers (cf. 1:25, 41, 43; 3:5; 7:34; 8:12; 9:19). Jesus’ sharp double command—Let (lit., “start allowing”) the little children come to Me, and do not hinder (lit., “stop preventing”) them—was a rebuke to the disciples (who had rebuked the people!).’

The Bible Knowledge Commentary further notes (regarding verse 15):
‘In a solemn pronouncement (I tell you the truth; cf. 3:28) Jesus developed the truth in 10:14. Whoever will not receive God’s kingdom as a gift now with the trustful attitude of a child will never (emphatic negative, ou mē, “by no means”) enter it. He will be excluded from its future blessings, specifically eternal life (cf. vv. 17, 23-26). God’s kingdom is not gained by human achievement or merit; it must be received as God’s gift through simple trust by those who acknowledge their inability to gain it any other way (cf. comments on 1:15).’
[Bold mine – MY]

Note on verse 16. ‘Jesus’ loving action (cf. 9:36) vividly illustrated that His blessing is freely given to those who receive it trustingly. The intensive compound verb blessed (kateulogei, imperf., occurring only here in the NT) emphasizes the warmhearted fervor with which Jesus blessed each child who came to Him.’
(Source: The Bible Knowledge Commentary)