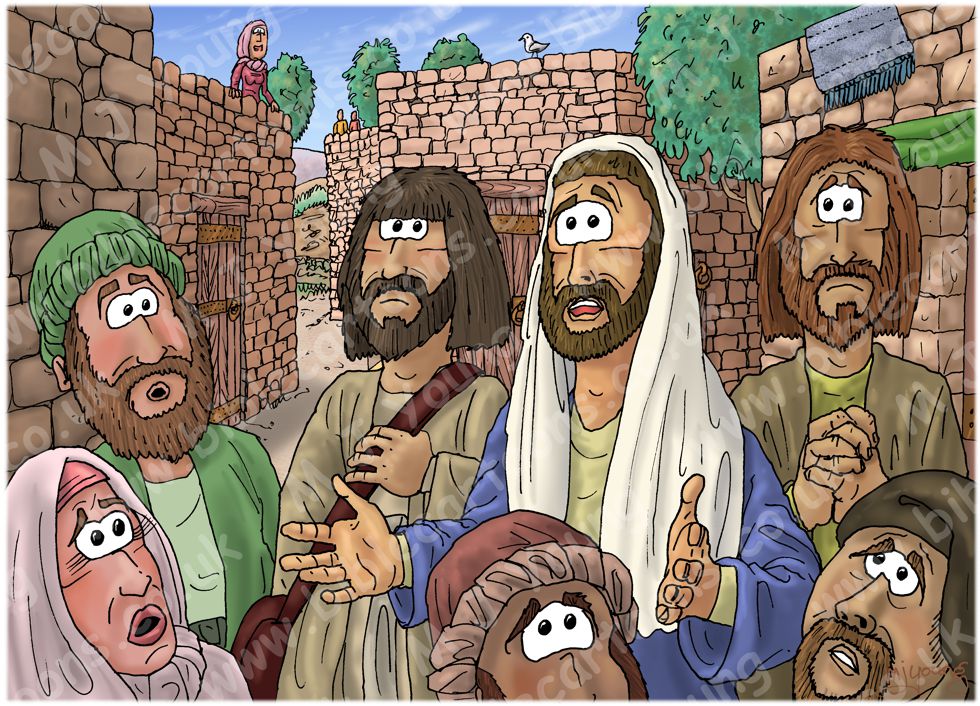 Luke 18:6-8 (ANIV)
6 And the Lord [Jesus] said, “Listen to what the unjust judge says. 7 And will not God bring about justice for his chosen ones, who cry out to him day and night? Will he keep putting them off? 8 I tell you, he will see that they get justice, and quickly. However, when the Son of Man comes, will he find faith on the earth?”

TIME OF DAY:
Unspecified in the Bible. I have set this scene in the mid morning.

LIGHTING NOTES:
The sun (high & on th left) is casting shadows to the right of figures, buildings & objects in this scene.
Notice that the figures on the left are no longer in the shadow of the building on the left, as they were in Scene 01.

CHARACTERS PRESENT:
From left to right: an unnamed man in green robes & a woman in pale head scarf. James/Cleopas (son of Alphaeus), Jesus (in white head scarf & blue outer robe), James (son of Zebedee) has his hands together in a gesture of prayer.
Two unnamed men are in the foreground.

RESEARCH/ADDITIONAL NOTES:
This scene shows Jesus talking to a crowd of people in a village or town. He is concluding his parable of the persistent widow & is asking “However, when the Son of Man comes, will he find faith on the earth?”

The expressions of the various listeners are rather doubtful or even fearful that when Jesus returns he won’t find as much faith in people as he would like to find! Let’s hope that is not the case!