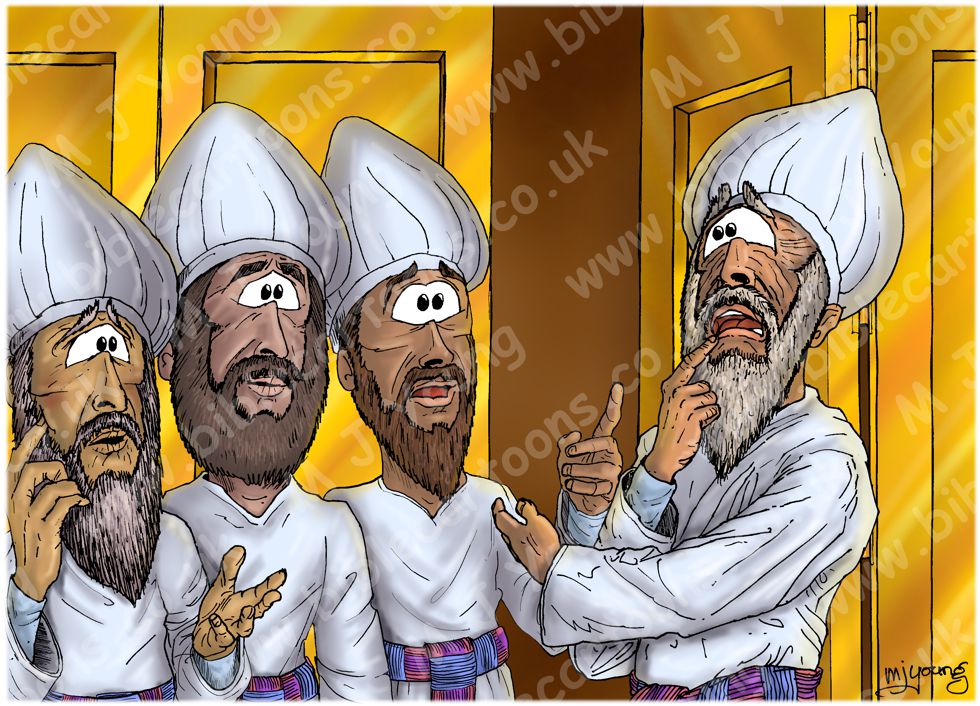 Luke 1:21-22 (NLT)
21 Meanwhile, the people were waiting for Zechariah to come out of the sanctuary, wondering why he was taking so long. 22 When he finally did come out, he couldn’t speak to them. Then they realized from his gestures and his silence that he must have seen a vision in the sanctuary.

TIME OF DAY:
This scene is set some minutes after the previous scene, so the time is perhaps half an hour after 9am, since my research informs me that this seems to be the time of the morning sacrifice (at the 3rd hour of the morning, or 9am – Source: The International Standard Bible Encyclopedia.)

LIGHTING NOTES:
As noted in scene 3 of this series, the temple was oriented so that the entrance pointed due east, towards the rising sun. The sun throws warm yellow light onto the scene from behind the viewer, which is reflected onto the figures in the scene as a yellow/gold glow.

CHARACTERS PRESENT:
Zechariah is on the right, three other priests.

RESEARCH/ADDITIONAL NOTES:
This is the fifth scene in this “Births foretold” series of Bible cartoons.

I have done quite a lot of research into what the temple of Herod might have looked like, what the priests wore when ministering in the temple, & what was inside the Holy Place, which we can see in the above scene. See previous scenes for these notes.

Zechariah’s colleagues thought he had seen a vision. But Luke 1:11 says he was visited by the angel Gabriel. I suppose that could have been a vision, but I prefer to take the Bible literally & believe the angel actually did stand in front of Zechariah, rather than him “seeing” Gabriel in his mind.