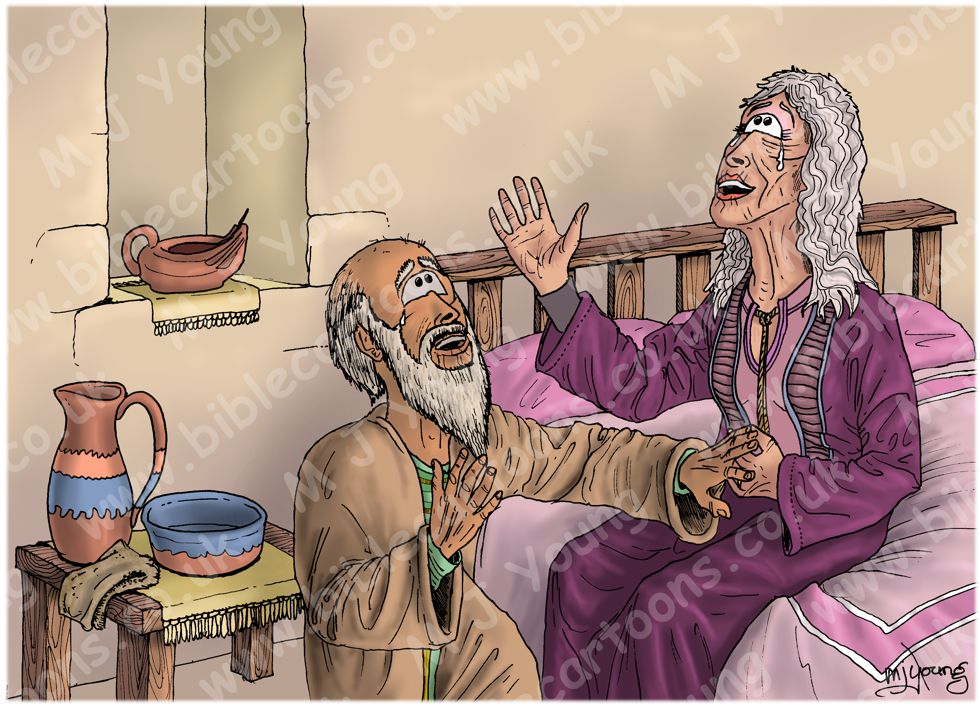 Luke 1:23-25 (NLT)
When Zechariah’s week of service in the Temple was over, he returned home. Soon afterward his wife, Elizabeth, became pregnant and went into seclusion for five months. “How kind the Lord is!” she exclaimed. “He has taken away my disgrace of having no children.”

RESEARCH/ADDITIONAL NOTES:
This is the sixth scene in this “Births foretold” series of Bible cartoons.

Zechariah has returned home to his wife Elizabeth. Here we see him kneeling before her, both amazed, as they touch her tummy. The two characters have the same clothes we saw them in, in scene 02.

“Because his term of service was only two weeks a year, and he had no son to support him in his old age, Zechariah probably worked a small farm or did other work in the hill country of Judah. (Priests were supposed to be supported by others’ tithes, not by working the land, but high taxes on the poor and unfair practices by the priestly aristocracy—especially in the decades just prior to a.d. 66—combined to make it harder on less wealthy priests.)
1:24-25. Praise such as Elizabeth utters here was common among the barren whom God visited (Genesis 21:6-7; 1 Samuel 2:1-11) but especially recalls Rachel’s exultation, “God has removed my reproach!” (Genesis 30:23).”
(Source: Bible Background Commentary – The IVP Bible Background Commentary – New Testament.)

Remember that Zacharias had been struck dumb (unable to speak) by the power of God, through the angel Gabriel. Elizabeth decided to remain in seclusion for several months. I wonder what she talked about to Zechariah? They were both probably excited, awe-filled, & grateful all at the same time! Perhaps Zechariah wrote down all that had happened to him in the temple, because Elizabeth knows that their son is to be named John, when he was born (see verse 60.)