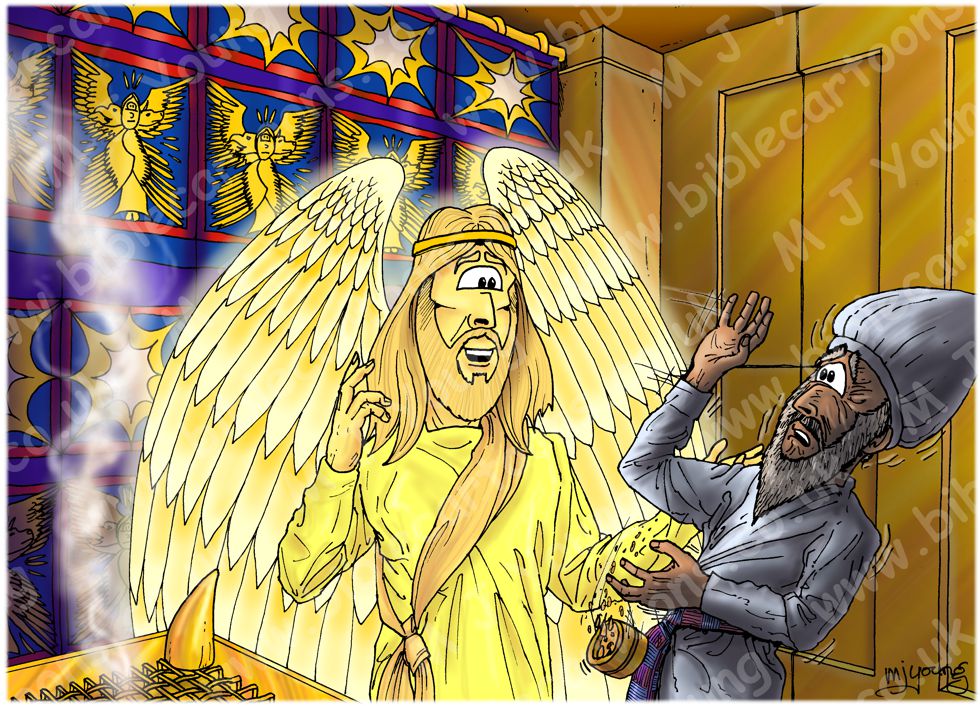 Luke 1:11-20 (NLT)
11 While Zechariah was in the sanctuary, an angel of the Lord appeared to him, standing to the right of the incense altar. 12 Zechariah was shaken and overwhelmed with fear when he saw him. 13 But the angel said, “Don’t be afraid, Zechariah! God has heard your prayer. Your wife, Elizabeth, will give you a son, and you are to name him John. 14 You will have great joy and gladness, and many will rejoice at his birth, 15 for he will be great in the eyes of the Lord. He must never touch wine or other alcoholic drinks. He will be filled with the Holy Spirit, even before his birth [1] 16 And he will turn many Israelites to the Lord their God. 17 He will be a man with the spirit and power of Elijah. He will prepare the people for the coming of the Lord. He will turn the hearts of the fathers to their children [2], and he will cause those who are rebellious to accept the wisdom of the godly.”
18 Zechariah said to the angel, “How can I be sure this will happen? I’m an old man now, and my wife is also well along in years.”
19 Then the angel said, “I am Gabriel! I stand in the very presence of God. It was he who sent me to bring you this good news! 20 But now, since you didn’t believe what I said, you will be silent and unable to speak until the child is born. For my words will certainly be fulfilled at the proper time.”

Malachi 4:5-6 (NLT)
“Look, I am sending you the prophet Elijah before the great and dreadful day of the Lord arrives. His preaching will turn the hearts of fathers to their children, and the hearts of children to their fathers. Otherwise I will come and strike the land with a curse.”

TIME OF DAY:
This scene is set some minutes after the previous scene, so the time is a little after 9am, since my research informs me that this seems to be the time of the morning sacrifice (at the 3rd hour of the morning, or 9am – Source: The International Standard Bible Encyclopedia.)

LIGHTING NOTES:
Some light from the rising sun is coming in through small windows set high up on the eastern wall, bathing the scene in a general warm glow. The other light source is the angelic glow surrounding Gabriel.

RESEARCH/ADDITIONAL NOTES:
This is the fourth scene in this “Births foretold” series of Bible cartoons.

I have done quite a lot of research into what the temple of Herod might have looked like, what the priests wore when ministering in the temple, & what was inside the Holy Place, which we can see in the above scene.

Zechariah’s job was: 1) to remove the ashes of previous incense burnt, 2) to collect hot, burning coals from the altar of burnt offering (outside in the temple courtyard) & to bring them in and place them on the golden altar, 3) to sprinkle the new incense on the hot coals and 4) while the smoke ascended, to make intercessory prayers on behalf of the people.
You can see the smoke rising up from the burning incense on the left of the scene. Notice the gold horn on the corner of the altar of incense. The original design for the altar, with its four horns is described in Exodus 35:25 [3]. The horns were used to smear sacrificial animal blood on, which was part of the prescribed means of atonement for the High Priest, or else for the whole Hebrew community (see Leviticus 4:7 [4])

Notice also that the walls are covered in gold plates, much like the outer porch walls.

We can see Zechariah is very surprised by the sudden appearance of the angel Gabriel; so much so that he is dropping a gold jar of incense!

I’m very pleased with the way this Bible Cartoon has come out. The angel Gabriel is based on other angels I have drawn, but I am pleased with his wings, the clothing folds, hair, etc. 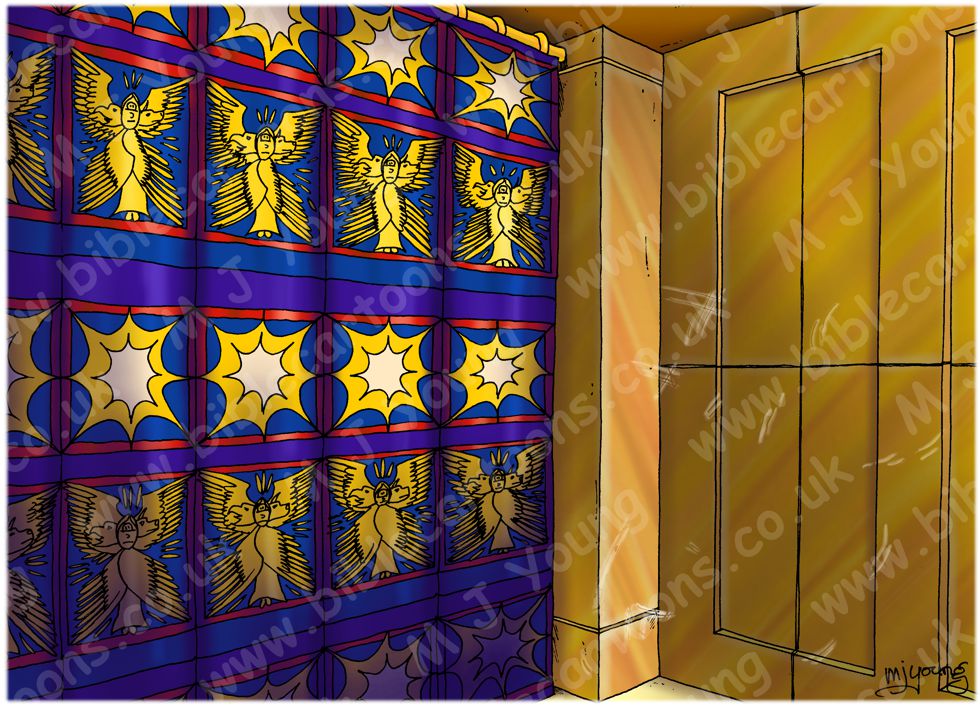 The veil or curtain.
The decorative hanging behind the angel Gabriel is the veil or curtain which separates the Holy Place (the room where Gabriel & Zechariah are) from the Most Holy Place. The design for that curtain is outlined in the Old Testament; this is my version of it. I first designed this version for my cartoon of Mark 15 – Death of Jesus – Scene 02 – Temple curtain torn, which shows the miraculous tearing of the veil/curtain at the time of Jesus’ death on the cross. I was keen to make the two curtains identical in design, to maintain continuity between my Gospel illustrations.

Position of objects in the Holy Place.
In the holy place were the altar of incense (by the veil/curtain, the table of shewbread (against the north wall, behind Zechariah), and the seven-branched golden candlestick (against the south wall, to the left of the scene).

Who is Gabriel?
‘(‏גַּבְרִיאֵל‎, gabhrīʾēl, “Man of God”; Γαβριήλ, Gabriél): The name of the angel commissioned to explain to Daniel the vision of the ram and the he-goat, and to give the prediction of the 70 weeks (Daniel 8:16; Daniel 9:21). In the New Testament he is the angel of the annunciation to Zacharias of the birth of John the Baptist, and to Mary of the birth of Jesus (Luke 1:19, 26). Though commonly spoken of as an archangel, he is not so called in Scripture. He appears in the Book of Enoch (chapters 9, 20, 40) as one of 4 (or 6) chief angels. He is “set over all powers,” presents, with the others, the cry of departed souls for vengeance, is “set over the serpents, and over Paradise, and over the cherubim.” He is prominent in the Jewish Targums, etc.’
The International Standard Bible Encyclopedia.

[3]
Exodus 37:25-29 (NLT)
‘25 Then Bezalel made the incense altar of acacia wood. It was 18 inches square and 36 inches high, with horns at the corners carved from the same piece of wood as the altar itself. 26 He overlaid the top, sides, and horns of the altar with pure gold, and he ran a gold molding around the entire altar. 27 He made two gold rings and attached them on opposite sides of the altar below the gold molding to hold the carrying poles. 28 He made the poles of acacia wood and overlaid them with gold. 29 Then he made the sacred anointing oil and the fragrant incense, using the techniques of a skilled incense maker.’