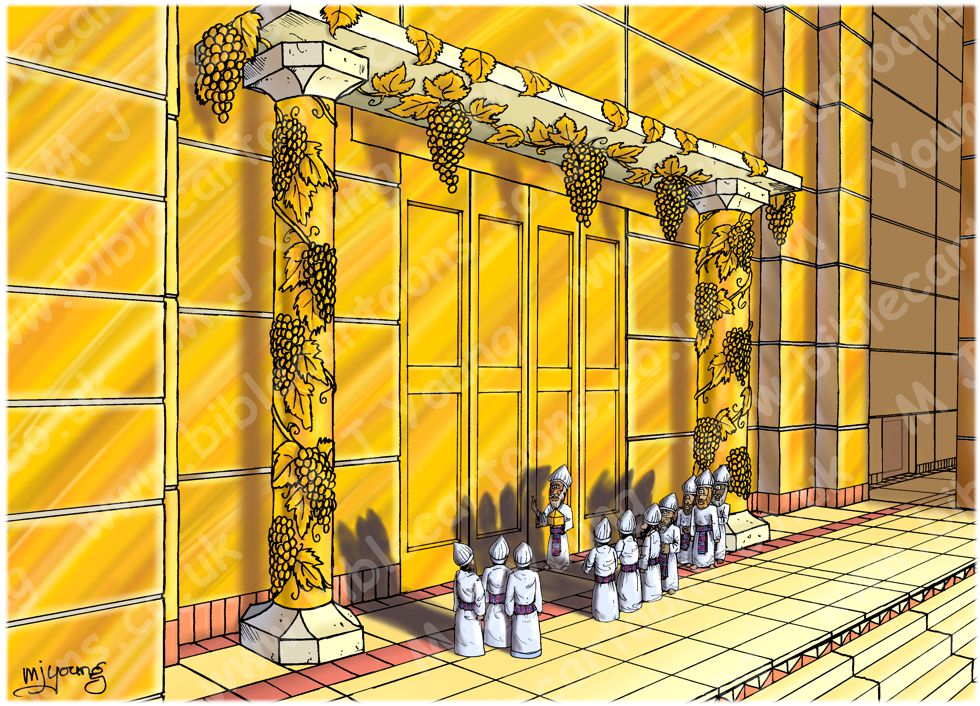 Luke 1:8-10 (NLT)
8 One day Zechariah was serving God in the Temple, for his order was on duty that week. 9 As was the custom of the priests, he was chosen by lot to enter the sanctuary of the Lord and burn incense. 10 While the incense was being burned, a great crowd stood outside, praying.

TIME OF DAY:
I have set this scene at 9am, since my research informs me that this seems to be the time of the morning sacrifice (at the 3rd hour of the morning, or 9am – Source: The International Standard Bible Encyclopedia.)

LIGHTING NOTES:
The temple was oriented so that the entrance pointed due east, towards the rising sun. [1] The sun throws warm yellow light onto the scene from the right, with the plates of gold on the porch & temple walls adding to its yellow/gold colour.

CHARACTERS PRESENT:
Zechariah, with his hand on the temple doors, about to enter. Various other temple priests praying & accompanying him, but who remain outside the temple building itself.

RESEARCH/ADDITIONAL NOTES:
This is the third scene in this “Births foretold” series of Bible cartoons.

I have done quite a lot of research into what the temple of Herod might have looked like, what the priests wore when ministering in the temple, & even what the possible orientation (to the cardinal compass directions) of the temple, so that I can show the sun’s position correctly in my illustration.

What did Zechariah wear when he was inside the Temple?
Zechariah (the small figure with his hand on the gold doors) is wearing his Temple garments, which are white. In the previous scene we see him wearing other travelling clothes.

‘The Priests officiating in the Holy Place wore these garments: A long tunic (the embroidered coat) with sleeves of white linen, woven throughout without seam, white trousers from hip to thigh, a white linen hat or mitre wound like a turban, but cone-shaped, and a sash or girdle woven in the same material as the veil (Ex 39:29).’
(Source: http://www.bible-history.com/tabernacle/TAB4The_Priestly_Garments.htm)

‘‘Those vestments which were common to all priests, were:
Priestly undergarments (Hebrew michnasayim) (breeches): linen pants reaching from the waist to the knees “to cover their nakedness” (Exodus 28:42)

Priestly tunic (Hebrew ketonet) (tunic): made of pure linen, covering the entire body from the neck to the feet, with sleeves reaching to the wrists. That of the High Priest was embroidered (Exodus 28:39); those of the priests were plain (Exodus 28:40).

Priestly sash (Hebrew avnet) (sash): that of the High Priest was of fine linen with “embroidered work” in blue and purple and scarlet (Exodus 28:39, 39:29); those worn by the priests were of white, twined linen.

Note that priests performed their offices in the Temple in bare feet; if you look closely at my picture you will notice that about all the figures!

How many priests were there?
There were a LOT of priests at the time of Jesus, such that one man may only go into the temple to minister before God once in his entire life time. That it was Zechariah who was chosen by lot on this particular occasion really shows the hand of God upon his life: that he was chosen at this exact time, when God (through the angel Gabriel) had a message for him.

‘There were many more priests and Levites than necessary (perhaps eighteen thousand) for any given function in the temple, so they were chosen for specific tasks by lot, during their appointed time of service (besides service on the three major festivals, they served about two weeks out of the year). Given the number of priests, a priest might get the opportunity in Luke 1:9 only once in a lifetime; this would have been a special occasion for Zechariah.’
(Source: Bible Background Commentary – The IVP Bible Background Commentary – New Testament.)

‘The entire priesthood was subdivided into 24 groups (see Mishmarot and Ma’Amadot) who took weekly turns to enable all its members to participate in the ministrations at one time or other. Each priestly group had a corresponding Levitical group. There was a further subdivision of the priestly groups into “households” (baté avot), with each such house responsible for a specific number of days of Temple service. There was also a Temple physician, a choirmaster, and a special officer in charge of the priestly vestments.’
(Source: http://www.answers.com/topic/temple-in-jerusalem#ixzz2hiM9r1l4)

Which temple?
There have been two temples in Jerusalem, the first was built by Solomon in 957 BC, taking seven years to complete. It was totally destroyed by the Babylonians in 586 BC.

The prophet Ezra informs us that the second temple (authorized by Cyrus the Great, the third king of the Persian empire) was began in 538 BC & completed 23 years later in the sixth year of the reign of Darius the Great (12 March 515 BC.) Although it is unclear exactly what the second temple look like, it is said that it lacked the splendour & grandeur of the first temple, which it replaced. Perhaps it was for this reason that the second temple was significantly renovated by Herod the Great (around 20 BC), and became known as Herod’s Temple. This is the temple illustrated in my Bible Cartoon above.

Although the remodelled (Herod’s) temple was formally dedicated in 18 BC, work on the structure actually continued for decades. The temple was completed only about two years before the beginning of the Revolt in 66 AD. It was destroyed by the Romans in 70 AD during the Siege of Jerusalem. All that remains of Herod’s temple is the western wall (now called the Wailing Wall) which is located at the foot of the western side of the Temple Mount. It is a remnant of the ancient wall that surrounded the Herod’s Temple’s courtyard.

What did Herod’s Temple look like?
We have descriptions of the plan of the first (Solomon’s) temple in 1 Kings chapter 6, detailing the size & construction materials.

The exact plan & nature of the second temple is much more sketchy & difficult to determine. Ezra chapter 3 outlines the rebuilding of the temple, whilst Ezra chapter 6 gives the account of the temple dedication ceremony. It is possible that the rebuilt (second) temple looked similar to Solomon’s temple, but that is mere conjecture on my part.

Here’s a useful summery from www.answers.com…
‘The Bible, the Talmud, and Josephus *1, as well as the more recent archeological excavations, account for the bulk of the available information on the Second Temple structure. No real picture is available of the structure during the time of the prophets Haggai and Zechariah, or even of Ezra and Nehemiah, other than the knowledge that during all this period the Second Temple was but a faint shadow of its former glorious self.’
(Source: http://www.answers.com/topic/temple-in-jerusalem)

The source above has much additional information about both temples & is well worth a read.

Herod’s temple was built of white marble [limestone more likely, that being the local stone of Jerusalem – MY], covered with heavy plates of gold on the front of the temple building & porch. It must have looked pretty impressive because Josephus compared it to a snow-covered mountain.
The entrance to the Holy Place (the temple building itself, where the figures are standing in my picture) was adorned with a large grapevine, made out of gold. The grapevine apparently symbolised the Hebrew nation. Josephus reported that the bunches of gold grapes were as tall as a man, which must have looked impressive.

There is a good cutaway illustration of Herod’s temple in the following website, which gives a good description of the temple building & the surrounding courts:
(Source: http://thegospelcoalition.org/blogs/justintaylor/2010/07/13/what-did-the-temple-look-like-in-jesus-time/)

The International Standard Bible Encyclopedia has a very detailed description of the temples.
(Source: http://www.bible-history.com/isbe/T/TEMPLE%2C+A1/)

[1]
How was the temple orientated in Jerusalem?
“Similarly, there is no doubt about the orientation of Solomon’s Temple: like Ezekiel’s (Ez 47:1) and Herod’s, it’s entrance faced east (cf. also 1 Ki 7:39)”
Ancient Israel: Its Life and Institutions, page 318
By Roland De Vaux

There is also fascinating web article about the reasons why Jewish temples and altars would have an East orientation.
(Source: http://www.bible.ca/archeology/bible-archeology-jerusalem-temple-mount-east-orientation-jewish-temples-altars.htm)

The orientation of the temples is important in that it establishes the relative position of the rising & setting sun. In terms of my Bible Cartoon that means that the rising sun is on the right (in the east) & shining onto the right hand side of the temple entrance & figures. Thereby casting shadows to the west (left) in my scene.