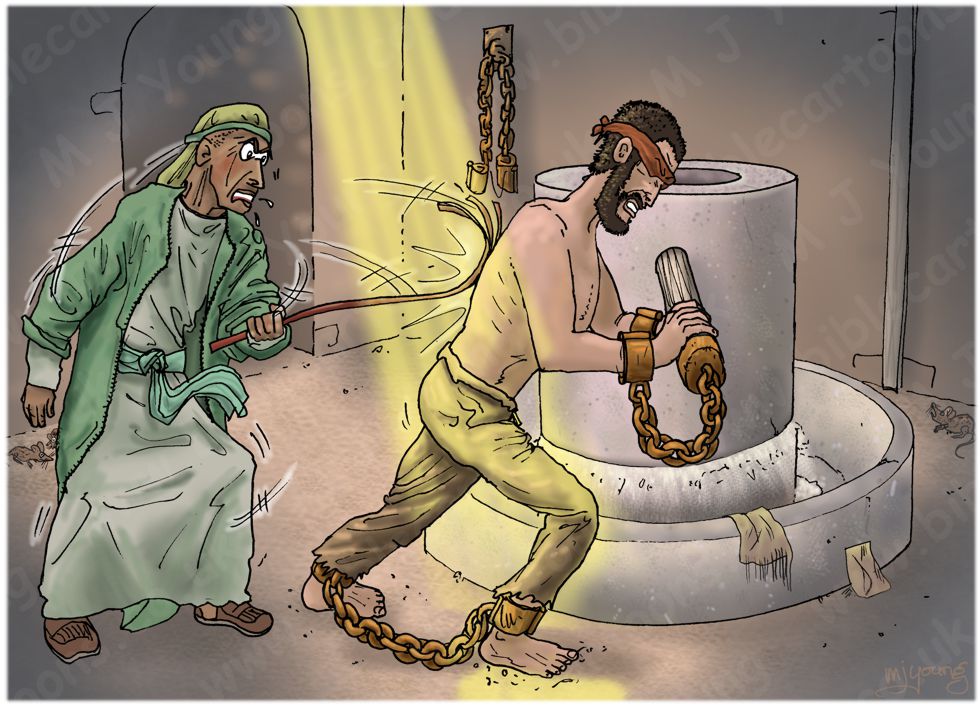 Judges 16:21-22 (ANIV)
21 [Then the Philistines seized him [Samson], gouged out his eyes] and took him down to Gaza. Binding him with bronze shackles, they set him to grinding in the prison. 22 But the hair on his head began to grow again after it had been shaved.

LIGHTING NOTES:
There is sunlight coming through a metal grating, high above the room Samson is in. It illuminates the rather dingy scene below!

RESEARCH/ADDITIONAL NOTES:
This scene shows Samson bound in bronze shackles (chains), being made to grind grain in prison in the Philistine city of Gaza. Grinding grain to make into flour required two heavy stones, one secured to the floor, the other fashioned and shaped so that it could revolve around, crushing the grain that fell between the stones. You can see a hole in the cylindrical stone Samson is pushing, into which the grain would be poured. At the bottom of the stone, the flour is coming out, and being collected in a cylindrical stone trough, which surrounds both grinding stones.

I have put a bandage over Samson’s eye sockets, to aid continuity between the scenes, as I originally drew in the final scene of this series, where Samson is in the temple of the Philistines. Notice that he is no longer in his usual costume, but is wearing simple fabric trousers. His back is bare.

Notice the three rats on the ground, no doubt eyeing up the flour!