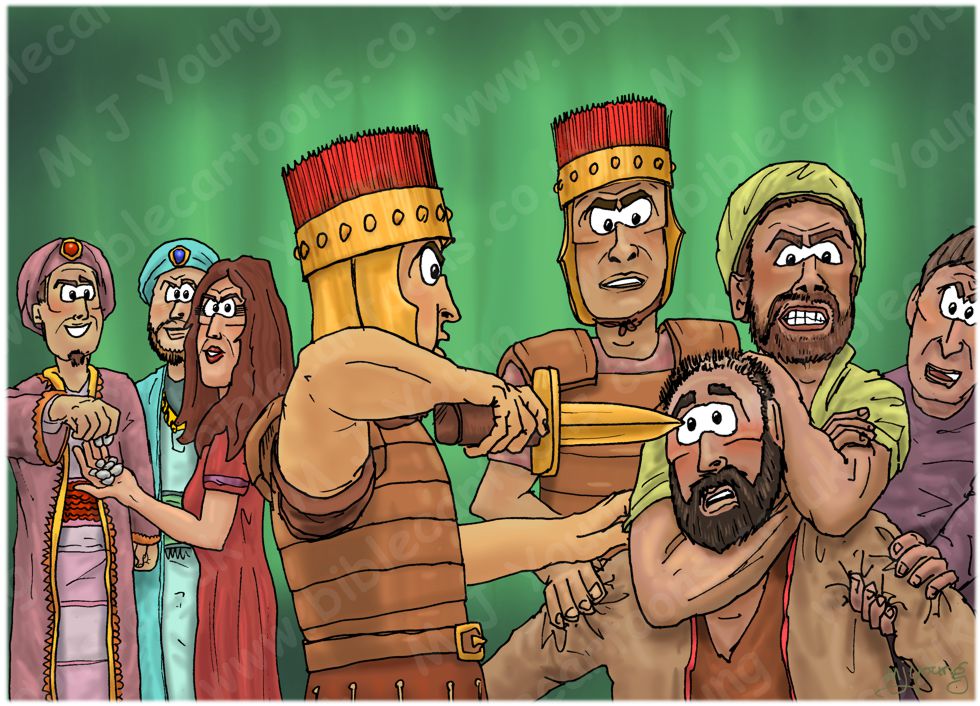 Judges 16:21 (ANIV)
21 Then the Philistines seized him [Samson], gouged out his eyes [and took him down to Gaza. Binding him with bronze shackles, they set him to grinding in the prison.]

CHARACTERS PRESENT:
Samson is being held in a head lock by a burly Philistine man! The soldier who was hiding behind Delilah’s curtain from previous scenes is advancing on Samson, sword in hand, ready to gouge his eyes out.
Another Philistine soldier & the man in purple robes from previous scenes are also holding Samson down.
Delilah is receiving the silver promised to her by the rulers of the Philistines (see note below).
Two of the Philistine rulers are looking smugly at Samson, as is Delilah!

RESEARCH/ADDITIONAL NOTES:
I could have made Samson look defiant in the face of defeat, but instead I decided I would make his expression one of surprise, regret, even a bit fearful, since he had suddenly lost his supernatural strength. I also wanted to make Delilah look hard and unremorseful… after all, she had just betrayed Samson for a reward of money.

I really didn’t want to illustrate Samson’s eyes being gouged out, so decided to show the Philistine soldier from previous scenes holding his sword close to Samson’s eyes, implying the inevitable.

In Judges 16:5 (ANIV) we read that, ‘The rulers of the Philistines went to her [Delilah] and said, “See if you can lure him [Samson] into showing you the secret of his great strength and how we can overpower him so that we may tie him up and subdue him. Each one of us will give you eleven hundred shekels [1] of silver.” ‘ I have shown Delilah in the background receiving her reward of silver coins from two of the leaders of the Philistines. I decided to show them in fine, expensive-looking clothing, denoting their wealth & status.