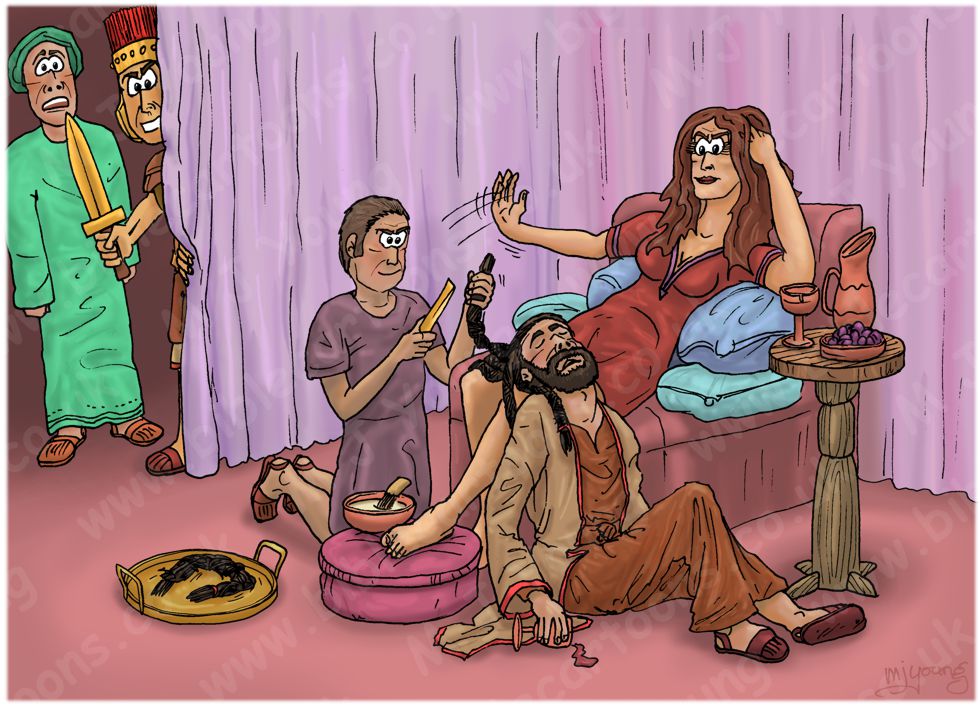 Judges 16:15-20 (ANIV)
15 Then [Delilah] said to him [Samson], “How can you say, ‘I love you,’ when you won’t confide in me? This is the third time you have made a fool of me and haven’t told me the secret of your great strength.” 16 With such nagging she prodded him day after day until he was tired to death.
17 So he told her everything. “No razor has ever been used on my head,” he said, “because I have been a Nazirite set apart to God since birth. If my head were shaved, my strength would leave me, and I would become as weak as any other man.”
18 When Delilah saw that he had told her everything, she sent word to the rulers of the Philistines, “Come back once more; he has told me everything.” So the rulers of the Philistines returned with the silver in their hands.
19 Having put him to sleep on her lap, she called a man to shave off the seven braids of his hair, and so began to subdue him. [1] And his strength left him.
20 Then she called, “Samson, the Philistines are upon you!” He awoke from his sleep and thought, “I’ll go out as before and shake myself free.” But he did not know that the Lord had left him.

[1]
Hebrew; some Septuagint manuscripts, and he began to weaken.

CHARACTERS PRESENT:
Samson asleep with his head on Delilah’s lap.
One Philistine man cutting the braids off Samson’s head with an iron razor. A Philistine soldier behind a curtain, with another Philistine man in a green robe.

RESEARCH/ADDITIONAL NOTES:
This scene shows Delilah in her bedroom (although she’s sitting on a comfy chair!), having plied Samson with wine (notice his spilled goblet on the floor) and lulled him to sleep on her lap. She is beckoning to some Philistine men to come and capture Samson. I have also drawn a Philistine man with razor in hand, cutting off Samson’s seven braids. Notice the shaving brush, foam and basin on the foot stool next to Delilah’s foot, and the tray with two of Samson’s braids on it, which have already been cut off.

I have included the chipped Goblet, wine jug, grapes and table from the previous cartoons for continuity between the scenes.