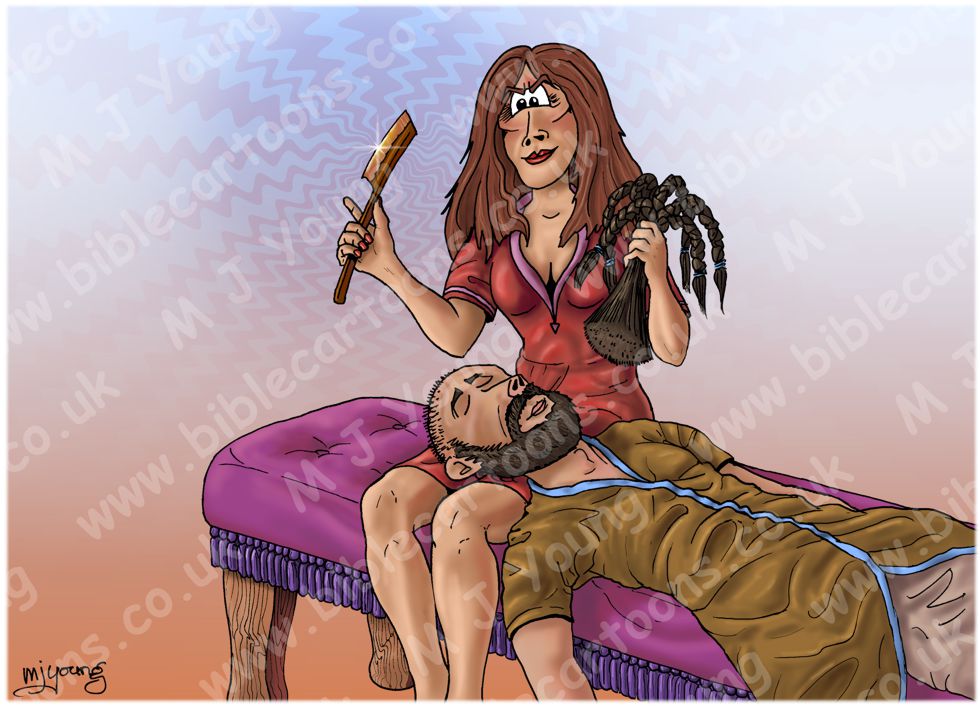 Judges 16:15-20 (ANIV)
15 Then [Delilah] said to him [Samson], “How can you say, ‘I love you,’ when you won’t confide in me? This is the third time you have made a fool of me and haven’t told me the secret of your great strength.” 16 With such nagging she prodded him day after day until he was tired to death.
17 So he told her everything. “No razor has ever been used on my head,” he said, “because I have been a Nazirite set apart to God since birth. If my head were shaved, my strength would leave me, and I would become as weak as any other man.”
18 When Delilah saw that he had told her everything, she sent word to the rulers of the Philistines, “Come back once more; he has told me everything.” So the rulers of the Philistines returned with the silver in their hands.
19 Having put him to sleep on her lap, she called a man to shave off the seven braids of his hair, and so began to subdue him. [1] And his strength left him.
20 Then she called, “Samson, the Philistines are upon you!” He awoke from his sleep and thought, “I’ll go out as before and shake myself free.” But he did not know that the Lord had left him.

[1]
Hebrew; some Septuagint manuscripts, and he began to weaken.

LIGHTING NOTES:
The light comes from the left of this scene.

CHARACTERS PRESENT:
Samson asleep with his head on Delilah’s lap.

RESEARCH/ADDITIONAL NOTES:
This design was originally for a “Bad Day” mug, but I thought I would include it here as a Bible Cartoons as well.

Notice that Delilah is using an iron razor, since the book of Judges is set in the early Iron age, after the Late Bronze age. She looks fairly scary! The Bible actually tells us (in verse 19 above) that “she [Delilah] called a man to shave off the seven braids of his [Samson’s] hair.” So, in fact, it wasn’t Delilah who shaved Samson’s head at all. However, for the purposes of this cartoon illustration I thought it would look better if we saw Delilah with a menacing looking razor in her hand!