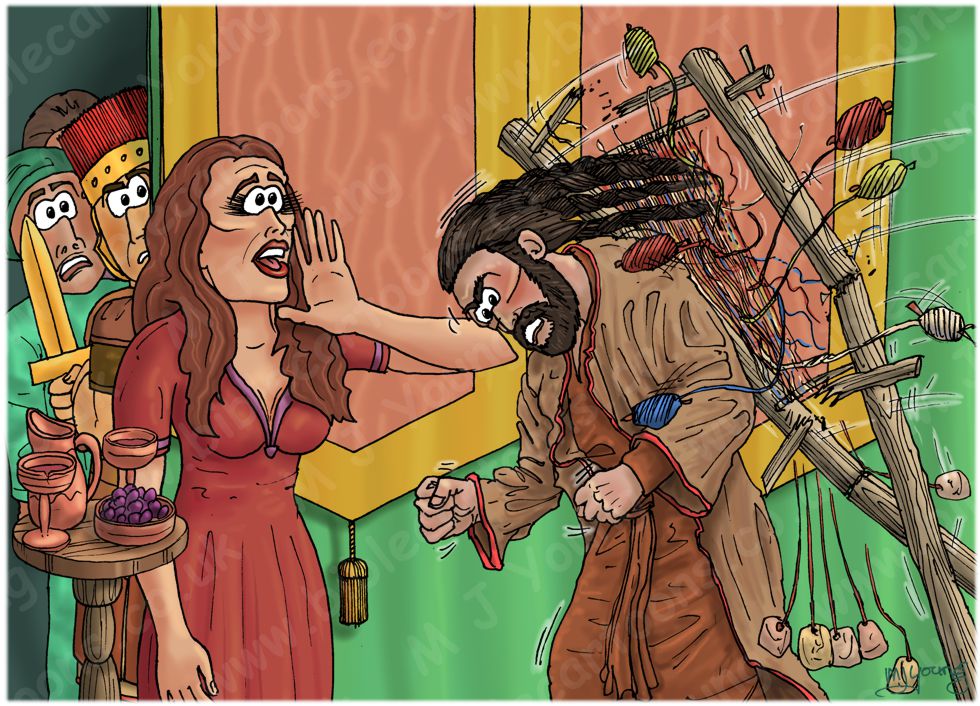 Judges 16:13-14 (ANIV)
13 Delilah then said to Samson, “Until now, you have been making a fool of me and lying to me. Tell me how you can be tied.”
He replied, “If you weave the seven braids of my head into the fabric on the loom and tighten it with the pin, I’ll become as weak as any other man.” So while he was sleeping, Delilah took the seven braids of his head, wove them into the fabric 14 and [1] tightened it with the pin.
Again she called to him, “Samson, the Philistines are upon you!” He awoke from his sleep and pulled up the pin and the loom, with the fabric.

[1]
Some Septuagint manuscripts; Hebrew “I can if you weave the 7 braids of my hair into the fabric on the loom.” 14 So she.

CHARACTERS PRESENT:
Samson breaking out of Delilah’s wooden loom.
Delilah shouting “Samson, the Philistines are upon you!”
Three (or more?!) Philistine men, hiding behind a curtain, to the left of the scene.

RESEARCH/ADDITIONAL NOTES:
This scene is similar to the two previous ones, in that it has a similar background. In this scene though the viewer is more perpendicular to the back wall, with the drapes on it. Delilah is only calling Samson with one hand to her mouth in this scene. As in the previous picture, she is in front of the Philistine men, who are hiding behind the green curtain. As in the previous scene, this one show Samson easily breaking the new ropes which Delilah has tied him up with.

I researched what ancient looms might have looked like for this scene & greatly enjoyed drawing Samson breaking out of it!

Notice that the table and it’s contents are in their usual bottom left position in the scene.