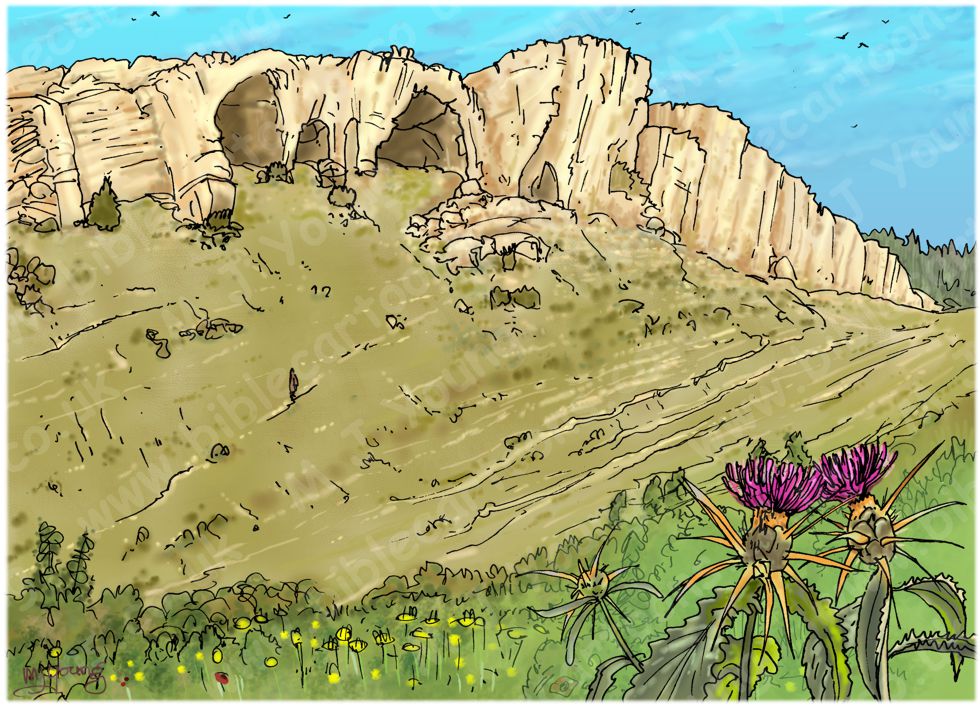 Judges 15:7-8 (ANIV)
7 Samson said to them, “Since you’ve acted like this, I won’t stop until I get my revenge on you.” 8 He attacked them viciously and slaughtered many of them. Then he went down and stayed in a cave in the rock of Etam.

TIME OF DAY:
The Bible doesn’t specify the time of day. I’ve set the scene in the morning.

LIGHTING NOTES:
The sun illuminates this scene, coming from above and to the right.

CHARACTERS PRESENT:
Samson climbing up towards the cave.

RESEARCH/ADDITIONAL NOTES:
I decided not to illustrate the beginning of verse 8 (He attacked them viciously and slaughtered many of them.), but instead wanted to show him going off to the cave in the Etam rock. Also, I thought it would be good to draw a scene showing the Sorek valley, since it features greatly in the Samson narrative, especially the next part.
Apparently the Sorek valley tended to separate the Philistine people (who lived on the plains & near the Medeterranean Sea in the west) from the Israelites(who lived in the highlands of Judea, and else where). Bearing that in mind we might see Samson as a frontiersman, and in his next few escapades he acts quite like a guerilla warrior, making hit-and-run strikes against the Philistine people.

In case you can’t spot him, Samson is the little red/brown smudge, in the middle left of the picture, walking up a sheep track towards the caves that look a little like half a skull buried in the ground (not my intention, but that’s what I think they remind me of!)

The thistle in the foreground (balancing the scene and giving foreground interest) is Centaurea iberica (aka Iberian knapweed, Spanish Centaury-thistle) which grows in 4 of the 5 Climatic regions of Israel [1]. It prefers light soils & flowers in April-July.

Where is Etam?
As with many of the locations mentioned in the Bible, there seems to some much debate about where exactly Etam is located. I have researched it using Bible commentaries and articles on the internet. One such broadly outlines 4 possible locations, concluding that, “The archaeological and geographic evidence point to ‘Araq Isma’in as being correctly identified as Etam, Samson’s place of refuge. The narrative evidence also supports this conclusion.” ‘Araq Isma’in is about 2.5 miles East South East of Zorah, Samson’s father’s home.
The article is very interesting, if you wish to read it, here is the link reference below.
[Source: Locating Etam: Samson’s Rock Of Refuge.
https://www.biblia.work/sermons/locatingetam-samsons-rock-of-refuge/]

[1]
The Mediterranean Woodlands and Shrublands, Semi-steppe shrublands, Montane vegetation of Mt. Hermon, but not in the 5th region which is the Desert & extreme desert climate.