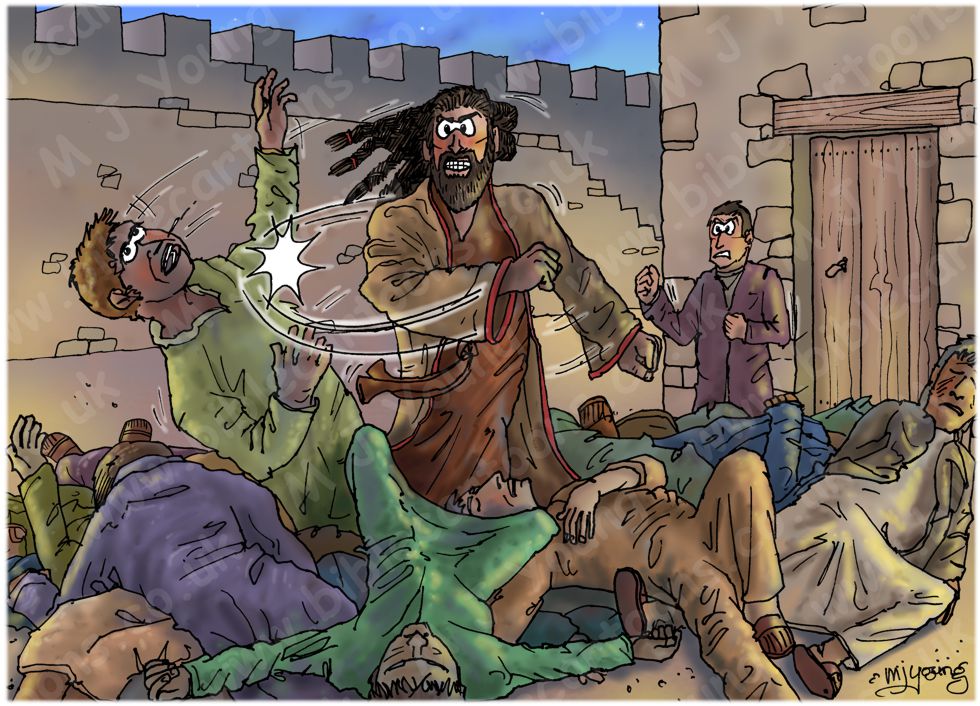 Judges 14:19-20 (ANIV)
19 Then the Spirit of the Lord came upon him in power. He went down to Ashkelon, struck down thirty of their men, stripped them of their belongings and gave their clothes to those who had explained the riddle. Burning with anger, he went up to his father’s house.
20 And Samson’s wife was given to the friend who had attended him at his wedding.

TIME OF DAY:
The Bible doesn’t specify the time of day. I imagine it could have taken place at night, which is when I’ve set this scene.

LIGHTING NOTES:
There is cool moonlight used in this scene, coming from above left.
Warm highlights can be seen on the edges of the figures from unseen torches on the left and right of the scene.

CHARACTERS PRESENT:
Samson and lots of Philistine men from Ashkelon.

RESEARCH/ADDITIONAL NOTES:
This scene shows Samson defeating lots of Philistine men in their city of Ashkelon. I decided to colour the scene using dark tones to represent evening. There are unseen city torches illuminating the fallen and fighting figures.

Ashkelon
“The Philistines who migrated to the coastal plain of Israel about 1200 B.C. settled in five major cities. Three of these were along the coastal branch of the International Highway leading from Egypt, but because of the presence of sand dunes, only Ashkelon was built on the shore. At 150 acres, the tel of Ashkelon is the largest Philistine city and one of the largest tells in all of ancient Israel.”
[Source: https://www.bibleplaces.com/ashkelon/]

ASHKELON
(the King James Version Eshkalon, (Eshkalonites; Joshua 13:3); Askelon, (Judges 1:18; 1 Samuel 6:17; 2 Samuel 1:20); ?????????????, ’ashk?elon; modern Askelan): A maritime town between Jaffa and Gaza, one of the five chief cities of the Philistines. The Ashkelonites are mentioned by Joshua (Joshua 13:3), and the city was taken by the tribe of Judah (Judges 1:18). One of the golden tumors (the King James Version “emerods”) sent back with the ark by the Philistines was from Ashkelon (1 Samuel 6:17). David couples Ashkelon with Gath in his lament over Saul and Jonathan (2 Samuel 1:20) indicating its importance, and it is joined with Gaza, Ashdod and Ekron in the denunciations of Amos (Amos 1:7-8). It is referred to in a similar way by Jeremiah (Jeremiah 25:20; Jeremiah 47:5, 7). Zephaniah (Zeph. 2:4, 7) speaks of the desolation of Ashkelon and Zechariah announces the fear of Ashkelon on the destruction of Tyre (Zech. 9:5). The city is mentioned in the Tell el-Amarna Letters, and a certain Yitia is referred to as king. It revolted against Rameses II and was subdued, and we have mention of it as being under the rule of Assyria. Tiglath-pileser III names it among his tributaries, and its king, Mitinti, is said to have lost his reason when he heard of the fall of Damascus in 732 BC. It revolted in the reign of Sennacherib and was punished, and remained tributary to Assyria until the decay of that power. In Maccabean times we learn of its capture by Jonathan (1 Macc. 10:86; 1 Macc. 11:60, the Revised Version (British and American) “Ascalon”). Herod the Great was born there (BJ, III, ii, 1ff). In the 4th century AD it was the seat of a bishopric. It became subject to the Moslems in the 7th century and was taken by the Crusaders. It was taken in 1187 by Saladin, who dismantled it in 1191 to make it useless to Richard of England, into whose hands it was expected to fall. Richard restored it the next year but it was again destroyed by Saladin. It was an important fortress because of its vicinity to the trade route between Syria and Egypt.
[Source: International Standard Bible Encyclopedia]