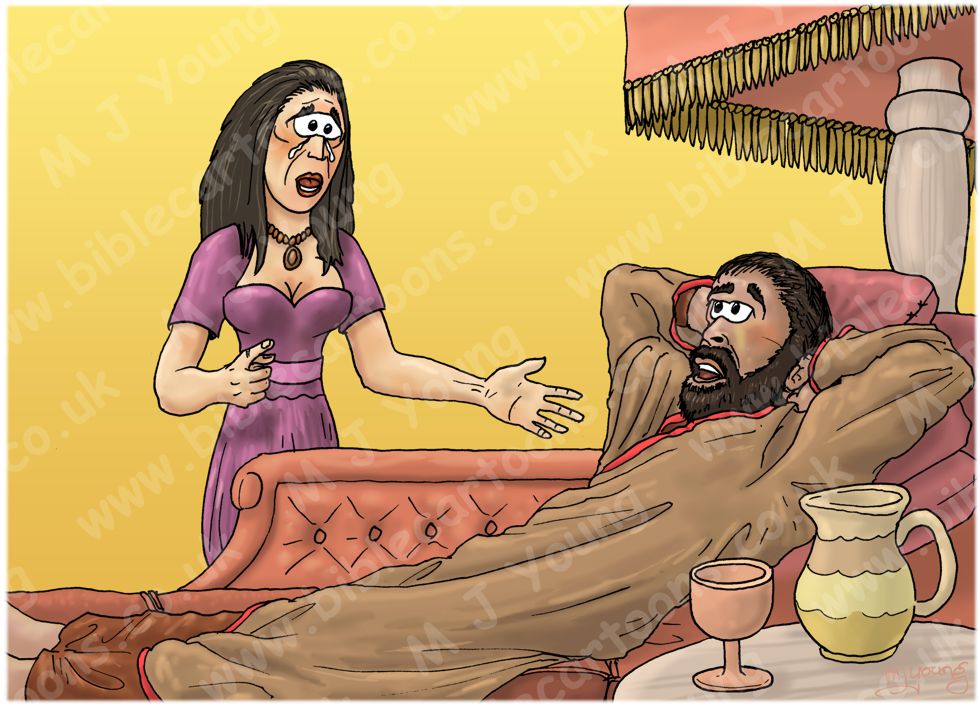 Judges 14:16-18 (ANIV)
16 Then Samson’s wife threw herself on him, sobbing, “You hate me! You don’t really love me. You’ve given my people a riddle, but you haven’t told me the answer.”
“I haven’t even explained it to my father or mother,” he replied, “so why should I explain it to you?” 17 She cried the whole seven days of the feast. So on the seventh day he finally told her, because she continued to press him. She in turn explained the riddle to her people.
18 Before sunset on the seventh day the men of the town said to him,

“What is sweeter than honey?
What is stronger than a lion?”

Samson said to them, “If you had not ploughed with my heifer, you would not have solved my riddle.”

LIGHTING NOTES:
The scene is inside a house, there are unseen oil lamps lighting the scene from above and left, casting shadows under people and objects to the right.

CHARACTERS PRESENT:
Samson and his fiancée (in the purple dress).

RESEARCH/ADDITIONAL NOTES:
This scene shows Samson resting on the ancient equivalent of a sofa or chez loung, complete with pillows! His fiancée is standing over him, complaining that he won’t tell her the answer to the riddle he set his thirty wedding companions. he is telling her “I haven’t even explained it to my father or mother,” he replied, “so why should I explain it to you?”